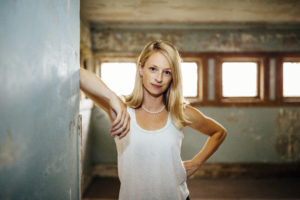 Editor’s Note: Click here to register for the 2018 Nebraska Historic Preservation Conference. The event, presented by Restoration Exchange Omaha and the Nebraska State Historical Society, will be held Saturday, March 3, at the Fort Omaha Campus of Metropolitan Community College. The cost is $50 per person and $40 for REO and NHPC members. The keynote address begins at noon.

She’s a self-proclaimed “recovering architect” with a passion for working with her hands. Amy Nicole Swift, founder and chief executive officer of Building Hugger in Detroit, will deliver the keynote address at the 2018 Nebraska Historic Preservation Conference. The title of her presentation is “Breaking Barriers: Reviving Pathways to Careers in the Trades.”

Swift formed Building Hugger to help create skilled jobs and provide more accessible preservation trades services in Detroit. She is also a professor of practice at Lawrence Technological University and said fieldwork informs her academic theories about the development of architectural material technology and construction methods during the industrial era.

Swift holds a BS in Interior Architecture from Lawrence Technological University and a MS in Historic Preservation from Columbia University. She speaks widely on current preservation topics, has been published in major industry journals, is a Tory Burch Fellow and has been featured in Glamour magazine. In preparation for her March visit to Omaha, Restoration Exchange recently asked Swift to respond to a series of questions, some personal and some professional. Here’s what she had to say.

What is your first preservation memory?

Preservation to me is being an advocate, so it’s funny to me when I think back to early memories of advocacy – before I even had the language for it. I actually grew up in a really small town on the outskirts between Toledo and Detroit. My parents moved into one of the early subdivisions in what had been a small agricultural town prior to the late ’70s, early ’80s. There was an orchard and labyrinth of open fields surrounding our neighborhood with a winding ravine where we used to play in the creek. I was always covered head to toe in dirt, chasing bugs and playing queen of the log. It was a pretty great early childhood. When I was about 5 or 6, the developer started the second phase of our subdivision and, in doing so, bulldozed the fields and cut the trees around the creek, disrupting our network of trails and effectively destroying the spaces where I made – up until that point in my life – some of my most meaningful memories. I’m not really sure what compelled me, but as those homes began to rise, every night I would go around stealing nails from their job sites and dumping them in the creek. I guess I thought if they didn’t have nails, they couldn’t build the homes that destroyed my playscape. I laugh now because I must have been the world’s youngest NIMBY!

What is your favorite word and why?

“Formidable.” No good reason. I took French in high school and I like the way it rolls off the tongue en français.

Why did you name your company Building Hugger?

I initially became interested in preservation after starting my architectural career focused on sustainable design at Perkins+Will in Chicago. After several years leading the charge for more sustainable projects under the LEED rating system, I began to question whether or not it was enough. The LEED system was almost wholly focused (at least at the time in the mid-to-late aughts) on the concept of “new” that drives our culture, which to me was the real root of environmental degradation. As an early adopter of sustainable thinking before it really hit mainstream, I was often accused of being a tree hugger – but I would always correct them and say I was actually a building hugger. To me, after seeing the wave of vinyl box development sweep through my ex-burb hometown, I saw the future of environmental stewardship as an exploration of stewardship of the built environment. In effect, if we focus on taking care of what we have, we ease the need to use resources to build new, incidentally mitigating the flow of building waste into our incinerators and landfills. I set off to New York to study the intersection of sustainability and preservation at Columbia University, and I’ve been a building hugger ever since. What’s grown out of that study into my practice here in Detroit is a business of localized, skilled labor practicing resource efficiency. Commercially we focus on historic window restoration, but really it’s so much more.

How is Detroit faring these days, and what role does the preservation of its historic structures play in its future?

Detroit is a tale of two cities – increased development pressure in the city’s core and decades-old lack of investment in neighborhoods. In the last several years, Detroit has seen an uptick in redevelopment in key neighborhoods, which has brought many long vacant buildings back online in the city’s core neighborhoods, but the zeal and enthusiasm for these efforts has made for a political climate that favors big spenders over smaller, more diverse neighborhood-scale investors. Preservationists now serve several roles: watchdogs to ward off demolition in the core city by big investors; and community advocates providing vision and resources to the neighborhoods to help find pathways to ameliorate blight. Buildings are an archive of the many storied layers of a people’s history. Detroit is known for its world-class architecture as well as the many common workers’ cottages and brick bungalows of its working class that make up the vast sea of its character. If the Detroit of the future wants to retain the rich culture of the Detroit of yesterday or even today, we need to work together to carry as many stories with us, and that starts with preserving the built environment.

What advice do you have for young women who want to enter the trades?

It is statistically probable that you will face pushback and need to prove yourself more in every scholastic pursuit, every interview you sit through and every job you hold from the time you are very young to the time you are very old for the simple reason that you are female. This is stupid, but it is the world, at least for now. That does not mean women, young or old, shouldn’t keep pushing at their dreams. I wanted to join the Boy Scouts so I could participate in the pinewood derby, but instead I sold cookies for the Girl Scouts. I wanted to take wood shop in high school, but my mom said that was for dumb boys, not smart girls. I interviewed to be an estimator for a painting contractor after I graduated from high school, but the owner of the company laughed at me and told me I was too small to be on his crew, that I best run off to college and get married. From what I can see, I think the climate of what’s possible for young women to get involved with nowadays is less gender focused than it was even when I was making early career choices in the ’90s-’00s. In fact, I see a lot of support for women who are pursuing nontraditional paths like trades work. My generic advice for anyone is life is too short not to do what you want, and it’s never too late to say screw it and change course. Life is dynamic; be patient, and let it take you.

What is the biggest misconception people have about preservation?

I think the biggest misconception is that it’s inherently anti-development. Preservationists, in my experience, are often in fact very PRO development, so long as it is not shortsighted. Preservationists take a longer look forward because they are capable of a longer look backward. Sometimes that conflicts with short-term development pro formas, which is where the stigma comes from, I guess. But a true preservationist is one who accepts change, as history supports that change is inevitable, and, through compromise, advocates for a positive future solution for all parties. You can’t negotiate if you aren’t invited to the table, so it’s important we play nice.

What is your dream project (that’s yet to happen, unless it already did)?

Every day I get to explore old buildings, from the very mundane to the highest expressions of architectural ingenuity. I get to work with owners of all types – homeowners, nonprofits, developers, investors – helping them be good stewards of their buildings, whatever the challenges may be for each particular property and whatever the vision of each owner. Every project is a dream project because I had the audacity to follow my dream to build a company and a role within that company that allows me to do what I love.

Give us your definition of the word “artist.”

My opinion of art is that it is not a finished product so much as it is the material remnants of a person expressing herself or himself uniquely and emotionally. It is the act of making that is the art. We of course know the high arts – the works of painters and sculptors and composers and performers. But are the beautiful crusty loaves the baker pulls from the hearth every morning not art? Does the auto mechanic not twist and solder steel into a thing of beauty – a running engine? Do you not marvel at the barista’s skillful hand as the milk pours into a flower? In this way, we are all artists if we contribute something to the world with our own two hands.