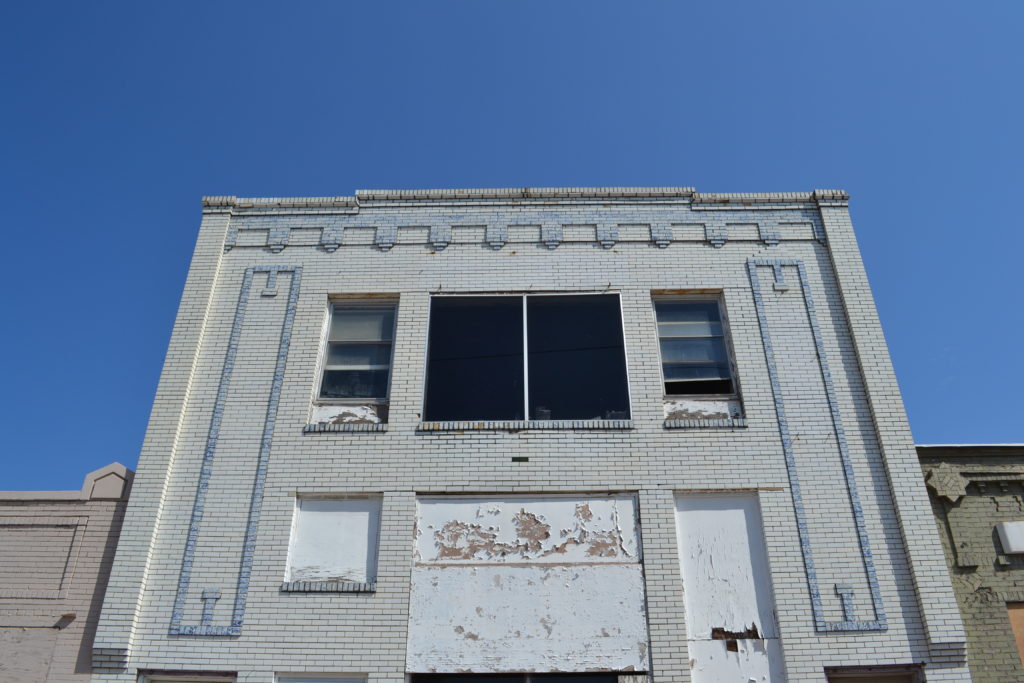 Over a year ago, Restoration Exchange was asked to write a National Register nomination for 1518 Cass Street in Omaha. The building, located on the north side of Cass between 15th and 16th streets, is approximately half a mile north-northeast of downtown Omaha. 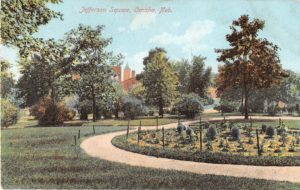 The property was in a choice location between two electric streetcar lines running north-south along 15th and 16th streets. This block originally formed the northern boundary of Jefferson Square, a block-sized area platted as a public park by the city in 1854.

Below is a circa 1911 postcard showing a stylized depiction of the building after it was constructed as the Truax Laundry. The second floor of the rear section and the date below the cornice (“19 N.E. TRUAX 11”) were not constructed. 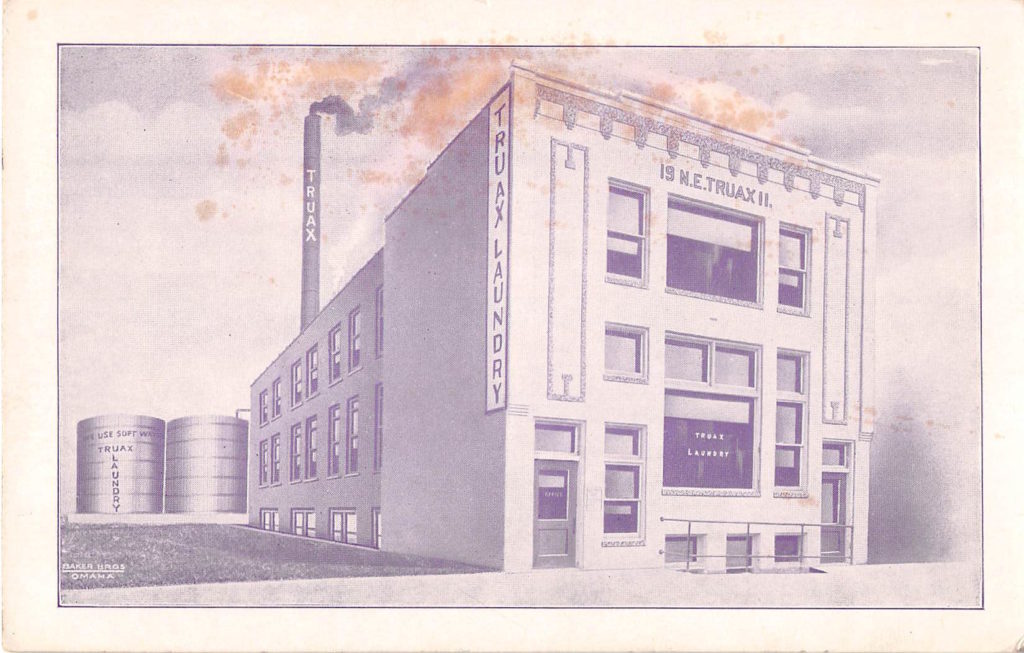 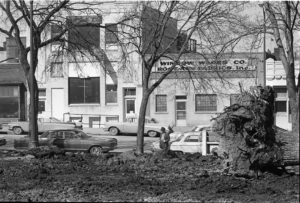 The 1969 photograph of the building at right shows Jefferson Square shortly before it was torn up for the I-480 overpass to be built above it.

Restoration Exchange discovered the building to be locally significant as the last extant location of the On Leong Tong, a Chinese-American Merchants Association that operated between 1938 and 1959. As such, it is the last known building or site associated with the tong and its history as a visible part of Omaha’s early Chinatown.

The Chinese probably first arrived in Omaha from California soon after the completion of the transcontinental railroad in 1869; a review of the Omaha city directories shows that in the 1870 directory, there did not appear to be any Chinese names listed. By 1872, two men were listed in what was likely an attempted phonetic spelling of the Chinese surnames “Yingyang” and “Yingalongjingjohn.” These men operated the Mongolian Laundry on 10th Street between Harney and Farnam.

The Chinese population of Omaha grew throughout the last quarter of the 19th century. By the early 20th century, it’s estimated that several hundred Chinese lived in Omaha’s Chinatown, which encompassed a four-block area northeast of 12th and Douglas streets – just north of the Holland Performing Arts Center.

In the first half of the 19th century, many Chinese and Chinese-Americans organized themselves into tongs. A tong was a multi-faceted, semi-secret organization that existed in many American cities with significant Chinese populations. Only a minority of a given city’s Chinese population belonged to a given tong (usually business and tradesmen), and the tongs were not fully representative of the Chinese population of the cities in which they operated. Larger cities had several tongs seeking supremacy over the others. It’s estimated that San Francisco – the city with the largest concentration of Chinese in the United States – had 30 such organizations by 1900.

Only one dominant tong developed in Omaha, the On Leong, which was established circa 1916. The first tong house was located at 111 North 12th Street in the center of Omaha’s Chinatown. This building was razed in 1962.

In many ways, the On Leong served as the business, social and cultural center of Omaha’s Chinese-American community during the early- to mid-20th century. During the time it occupied 1518 Cass Street, the tong, as a Chinese-American chamber of commerce, served as an all-male organization composed of the city’s Chinese businessmen – farmers, restauranteurs, shopkeepers, laundrymen and others. The organization supported newly-arrived immigrants who arrived with letters of introduction from friends, associates and family members in China. The tong supported the immigrants until they got jobs, often at On Leong member businesses. The On Leong was like a benevolent society that assisted member and sometimes non-member Chinese-Americans with short-term financial or other assistance.

It was also a place where the community celebrated important holidays, such as the Chinese or Lunar New Year (usually in late January or early February). This holiday is characterized by the payment of old debts, the cleaning of buildings to remove the misfortune of the previous year, multi-day feasts and lighting strings of firecrackers (to frighten away evil spirits and bad luck and to make room for fortune and good energy). The community also celebrated the Dragon Boat Festival (usually in June), commemorating the death by drowning of an ancient poet-hero; they cooked sweet rice wrapped in leaves to resemble a dragon-shaped boat.

The Mid-Autumn Festival, celebrated in late August or early September, originated in China as a thanksgiving feast to celebrate a successful harvest. The community also observed other, lesser-known holidays throughout the year as well as more local events such as the births, marriages or deaths of the family members of tong members and/or the local Chinese community.

Omaha’s Chinese community numbers dwindled into the mid-20th century as new opportunities opened for them elsewhere. As early as 1943, their numbers were estimated at around 50 adults, down from an estimated 500 earlier in the 20th century. The tong moved out of the original building on 12th Street, perhaps seeking smaller and/or less-expensive space. Starting in 1938, it rented the second floor of the Truax Laundry building at 1518 ½ Cass St. The On Leong continued to refer to itself as a merchants association; it was, in fact, often listed as such in city directories through its final listing in 1958. 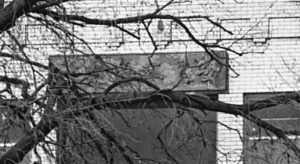 The tong flew the Nationalist Chinese flag below that of the United States from a flagpole on the roof, and a sign with Chinese characters was displayed along the cornice as the photo on the right shows.

To make this nomination happen, Restoration Exchange was charged with finding personal accounts from people tied to the building. This proved difficult because of the small number of third- and fourth-generation Chinese still in Omaha. Fortunately, along came Betty Chin. Her husband, Dennis Chin, is the grandson of Chin Ah Gin, the founder of Omaha’s King Fong restaurant. 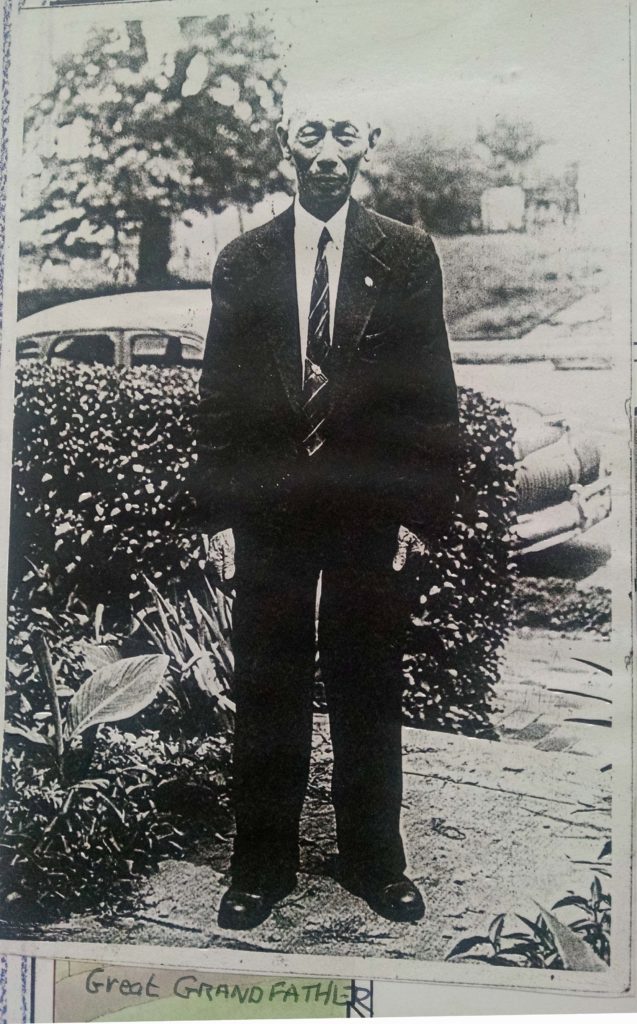 Dennis Chin said his father, Carl, recalled that the On Leong Tong represented a group of family members like a social fraternity and was made up exclusively of male businessmen in the Chinese-American community. As an indication of the obligation felt by tong members to help new immigrants, Dennis Chin said his grandfather opened King Fong and earlier restaurants to provide jobs for these Chinese immigrants who provided adequate letters of introduction. 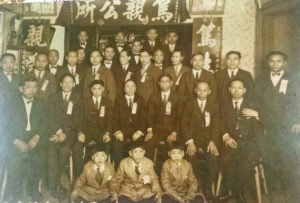 The Gee How Oak Tin Association

Chin Ah Gin was the patriarch of the city’s Chinese-American community and was an active member of the On Leong and the separate Gee How Oak Tin Association, a fraternal group made up of descendants of an ancient Chinese king, including the extended Chin family.

Although Dennis Chin said he was kept away from Omaha’s Chinatown as a child due to safety concerns (the area, full of recently-arrived immigrants, was considered rough and generally unsafe), he recalled that his grandfather lived with his family and that a room was always reserved for newly-arrived immigrants who might arrive at any hour of the day or night. These new immigrants would live in the house until they got a job. Afterward, they would move into apartments on Cass Street.

When Chin Ah Gin retired from the King Fong restaurant in 1954, he did not sell the business but gave it to the Huey family on the condition the Hueys would continue to provide jobs for new immigrants. 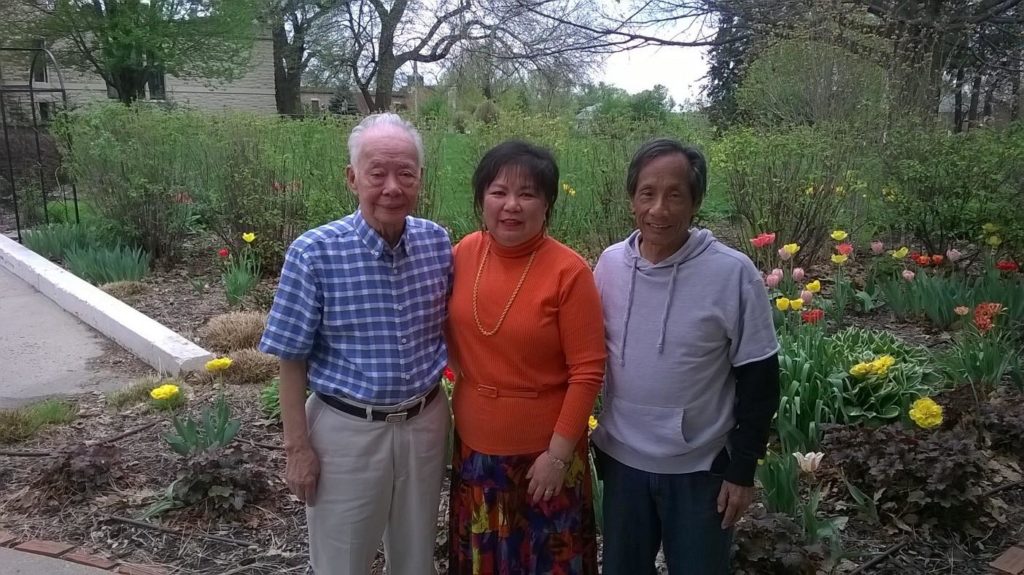 Chu Huey is one of the last surviving members of Omaha’s Chinese-American community from the mid-20th century. He recalled the On Leong building at 1518 Cass Street as a social hall, among other things: younger men such as himself played mahjong (a game of chance like rummy that’s played with tiles instead of cards) in the mornings. The older men came to play in the afternoons as the young men went off to their jobs in the local restaurants and other Chinese-run businesses.

The tong and the local Chinese population continued to dwindle in size throughout the 1950s, and the tong ceased operating after the death of its leader, Chin Ming Yuet, on Dec. 23, 1959. A newspaper article from December 1961 indicated that while the tong had already vacated its rooms at 1518 ½ Cass Street, the building, used at the time as a distribution center by the Volunteers of America, still retained Chinese characters across its top.

The building has been approved by the local and state state preservation boards for inclusion on the National Register. Restoration Exchange Executive Director Kristine Gerber said she is awaiting final approval by the National Park Service and should hear any day. “We’d like to thank Patrick Thompson for researching and writing the nomination, the North Omaha Turnback Tax Grant for helping provide funds to make the nomination happen and building owner Chris McClellan for investing in this property and keeping its history alive,” she said.

Below are photos of the building’s interior. Do you have any historic photos or information about Omaha’s Chinatown? Send it to info@restorationexchange.org. 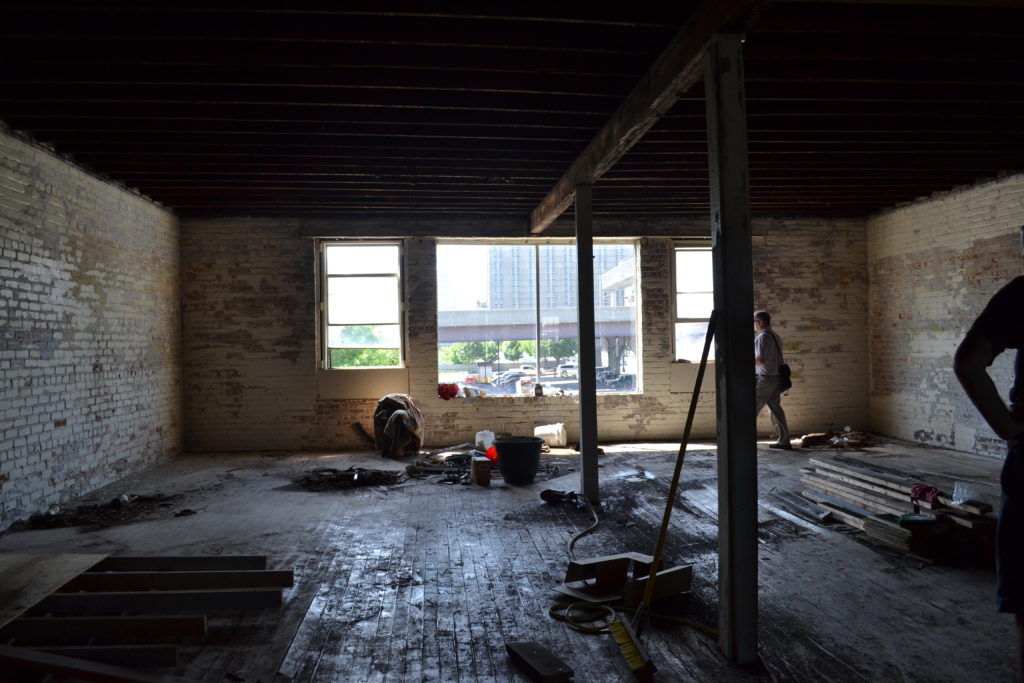 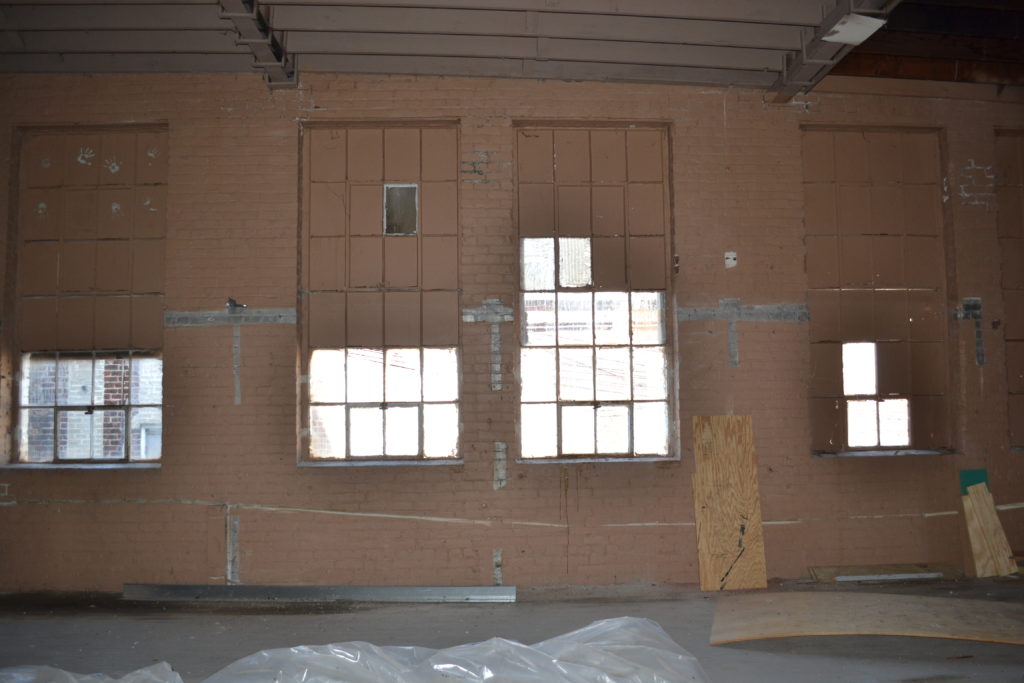 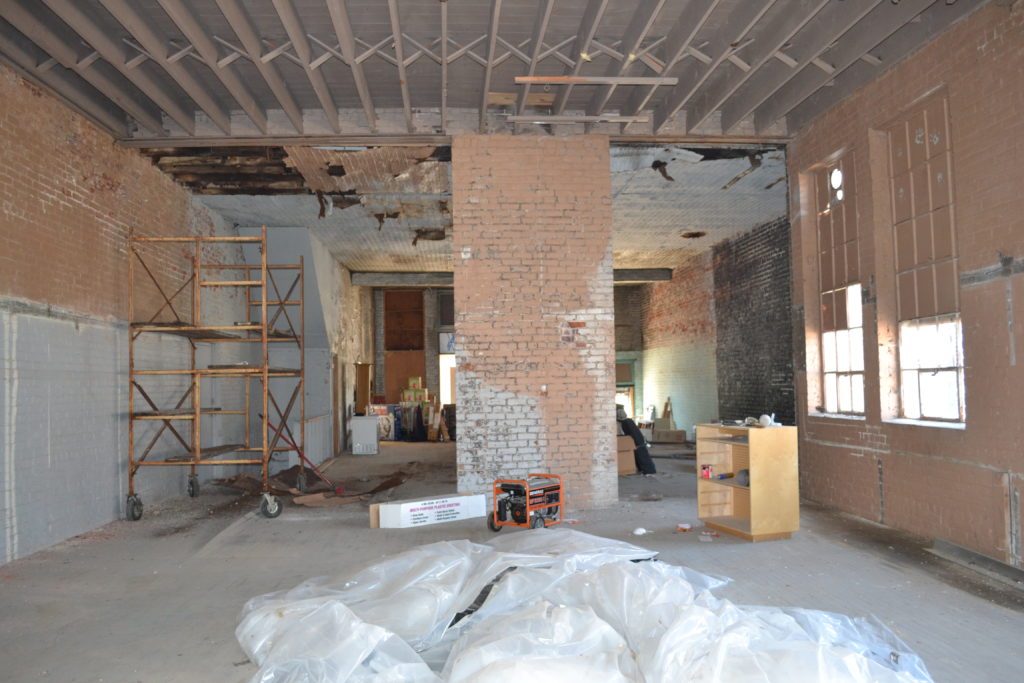 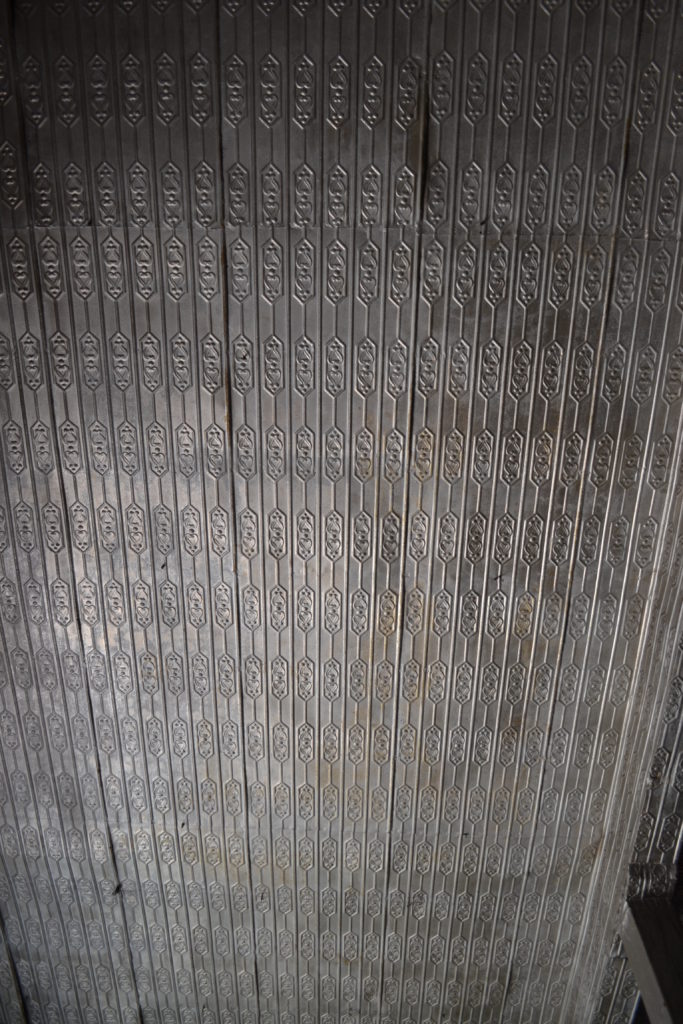