Read The History of Wyman Heights, Then Tour It Oct. 1

Editor’s Note: Restoration Exchange will host it 13th historic neighborhood tour Sunday, Oct. 1, in Wyman Heights. Located just north of Interstate 680 on North 29th and North 30th streets, the neighborhood offers a mix of Tudor Revival, Mid-Century Modern and Craftsman homes with an incredible view of the Missouri River and downtown Omaha. Tour tickets are $15 each or two for $25. If you become a Restoration Exchange member at the tour, your ticket is free! You can buy tickets and memberships in advance through Eventbrite, or you can purchase tickets Oct. 1 from noon to 4:00 p.m. at the Florence City Hall, 2864 State St. Tickets include a tour booklet filled with a history of the tour sites and neighborhood. The tour route is 0.6 miles – the homes are only accessible via shuttle from Florence City Hall or by bicycle. See you Sunday!

The History of Wyman Heights
Researched and written by Restoration Exchange Member Patrick Wyman for the North Omaha History Blog and reprinted here with his permission. Patrick is related Henry Wyman, the developer of Wyman Heights.

The hills north of Florence were once referred to as Omaha’s “Black Forest.” Once a hunters’ and trappers’ paradise, the hills are now the home of a neighborhood with picturesque views of the Missouri River. The neighborhood, among the most unique in the city, was founded in 1926 by prominent Omaha realtor Henry Wyman, who aptly named it Wyman Heights.

Wyman Heights sits on the southern edge of the hills that previously served as a home to Native Americans as well as Nebraska’s first white settler, Manuel Lisa. Lisa created a fur trading post called Fort Lisa in this area in 1812. Three to four miles north was a busy steamboat landing that became the town of Rockport in 1855.  In addition to a steamboat landing, the town boasted a hotel, brick and lime kilns, a grist mill and stone quarries. The town faded away as the railroad made the steamboat landing obsolete.

Before Wyman Heights came to fruition, there were notable homes on the first hill north of Florence. Among these were “Rosemere,” which was said to be the “the first pretentious suburban home erected” on this hill. The home was built upon 10 acres of land and was owned by Tom Crane. By 1911, there were several other homes built in this area. They included:

Walden Wood, pictured below, was said to have the most beautiful view in all of Douglas County, while Woodney was perched upon the summit of the hill and could be clearly seen from the town of Florence below. The location of these homes offered not only a view of Florence to the south but the Missouri River to the east.

Wyman Heights Emerges
Prior to the establishment of these homes, Wyman was busy acquiring land in this area. In 1905, he purchased the southeast portion of what was then Florence Heights. Over the next 20 years, he purchased more than 80 acres of land.

After re-platting the land in 1926 with the intent of selling the plots for a premium, Wyman was contacted by the University of Omaha. The university sought the land in order to build a new campus. Representatives of the university suggested this site because it was located just outside the city limits but still within easy reach of downtown. It was also suggested that the beauty of the wooded hills and its views offered the potential for a campus with large appeal. The attempt failed, as the university considered the land to be too expensive.

Several months later, Wyman was ready to fulfill his dream of making Wyman Heights one of the best neighborhoods in all of Omaha. To that end, he put 76 lots on the market. The expectation was that each home would cost between $10,000 and $15,000. The neighborhood took the shape of a horseshoe, with Ferry Street on its southern edge serving as the open end. The neighborhood stretches north up the hill where Main Street (present day 30th Street) ended and intersected Fifth Street (present day 29th Street).

As Wyman expected, the lots were highly desired due to their sweeping views, mature trees and proximity to the Florence streetcar line, which offered easy access to downtown Omaha. 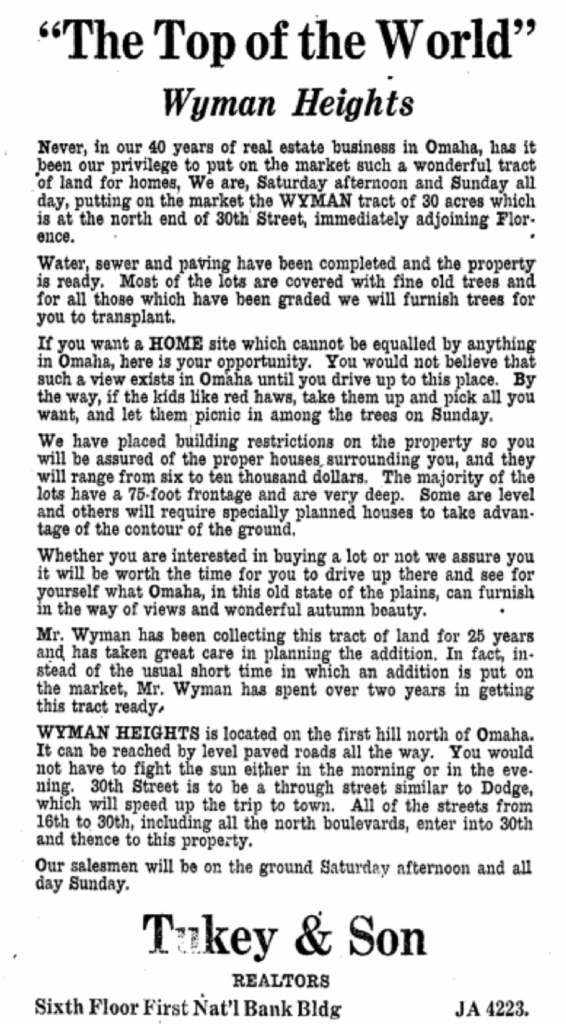 At right is an ad in which the Tukey & Sons Realtors claim to have never put such a wonderful tract of land on the market. The ad drew significant interest with more than 5,000 people visiting Wyman Heights when it was opened Oct. 10, 1926.

Additional land that Wyman acquired was donated to the City of Omaha in 1920 with the stipulation that it be used as a bird and game refuge. The land was located between Wyman Heights and the Missouri River.

In 1938, the federal government sought this land in order to build a boat basin and maintenance yard. It was expected to employ 150 to 300 people and bring several hundred thousand dollars to the city payrolls on an annual basis.

Wyman agreed to deed the land to the federal government which, in turn, agreed that the basin would be out of sight of the neighborhood. Both the boat basin and maintenance yard continue to exist along John J. Pershing Drive.

In 1927 Wyman built a new 10-room, 4 ½ bath home also called Woodney on the site of his old home. When it was finished, the Omaha World-Herald referred to the residence as “one of Omaha’s newest and loveliest suburban places.” 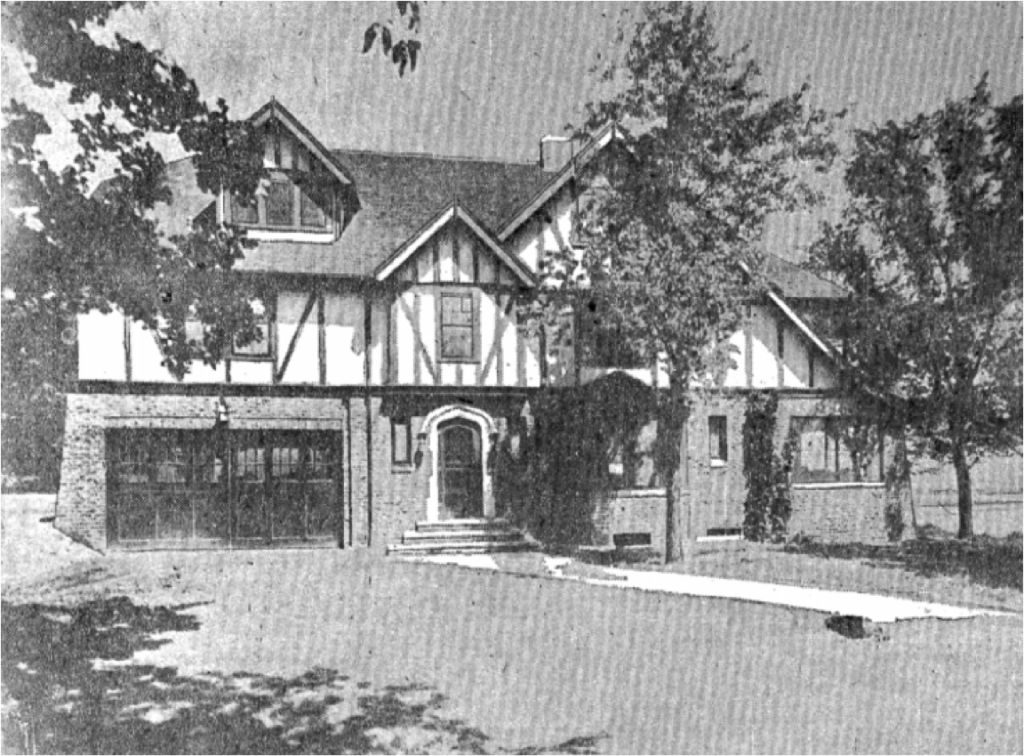 Henry Wyman’s personal home in Wyman Heights as pictured in the Omaha World-Herald on Aug. 28, 1927. 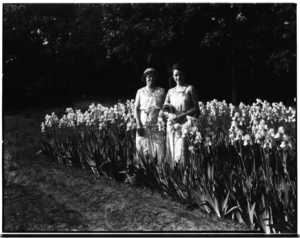 Mrs. Sealock and daughter, Thelma, at their home at 9680 N. 30th St. in 1932. Photo from the Bostwick-Frohardt Collection owned by KM3 and on permanent loan to The Durham Museum.

The founder’s dream of making Wyman Heights among the best neighborhoods in Omaha was well on its way to being realized when the Great Depression struck in 1929. At that point, development slowed considerably, and the saddened founder opted to sell his beloved home in 1931 to Dr. William Sealock for $18,000. Despite moving to the Blackstone neighborhood in Omaha, Wyman frequently returned to Wyman Heights.

In an effort to sell the remaining lots in Wyman Heights, Amos Grant Co. posted an ad in the Omaha World-Herald in 1931 claiming that the neighborhood was the lowest priced high-class district currently on the market. The following year, as lot sales remained stagnate, United States National Company conducted a liquidation sale by offering the remaining 40 lots at prices that were less than half the original sale price. The ad below appeared in the Omaha World-Herald April 10, 1932. 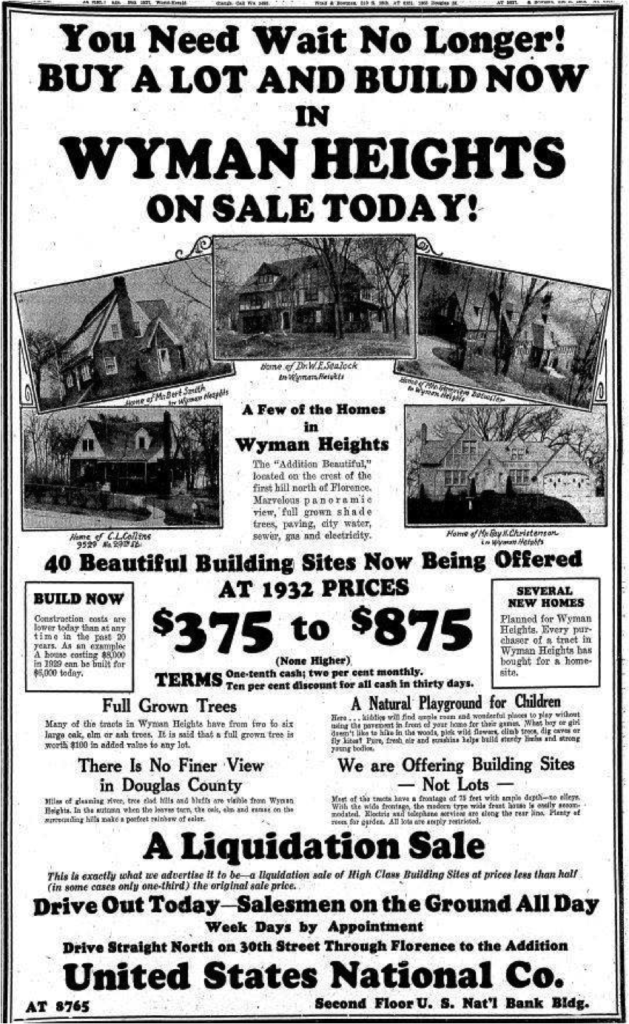 Post-World War II Boom Period
After the depression ended, development across the country began to pick up. This was no different in Wyman Heights, which experienced a renaissance in the housing boom following the end of World War II in 1945. As a result, all but four of the remaining lots were sold by 1956.

During the 1950s, the area surrounding Wyman Heights began to change drastically. The Mormon Pioneer Memorial Bridge was built in 1952 as a toll bridge that would take passengers traveling on Nebraska Highway 36 over the Missouri River to Crescent, Iowa. The following year, the streetcar lines were removed in an effort to widen 30th Street. After that, the neighborhood was orphaned from the rest of Florence when Interstate 680 sliced through 30th Street. Wyman Heights, however, remained the neighborhood on the hill just north of Florence. 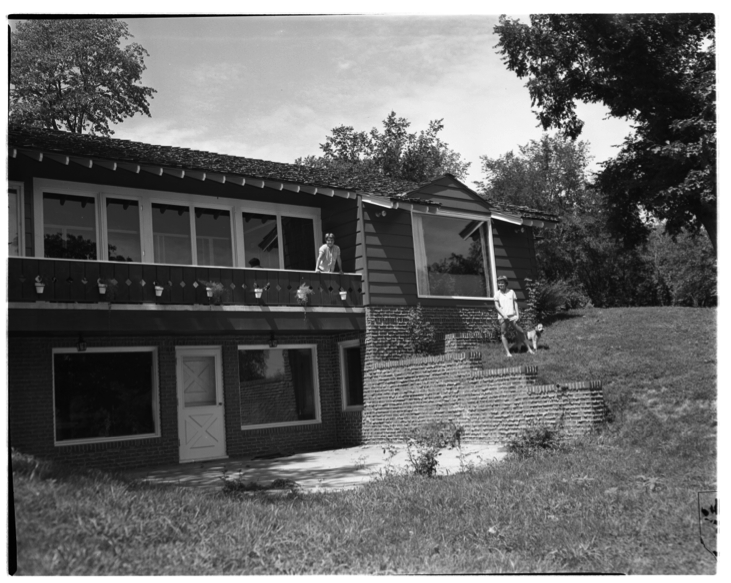 Today Wyman Heights is an “architectural panorama” that was built over a 35-year period. On the southern end of the neighborhood are white frame bungalows. Further up the hill, you’ll find a sprinkling of Tudor-style houses that were popular when the neighborhood was founded in the ’20s through the ’40s. Add to that sprawling ranch homes that were popular in the ’50s and ’60s.

The diverse collection of homes includes Woodney at 9680 N. 30th Street. It also includes an architecturally designed mansion that once served as the home of Omaha Mayor Gene Leahy. The home, built in 1945 and located at 9630 N. 30th Street, once had a gymnasium with a basketball court, shooting range and soda fountain. During the height of the nuclear scare, the owner offered his concrete basement with its 20-foot-high reinforced steel ceiling as a bomb shelter. The former home of the Omaha Reed’s Ice Cream company founder Claude Reed was built in 1938 and sits at 9645 N. 29th Street. The head of one of the world’s largest construction companies, Peter Kiewit, lived at 9702 N. 30th Street in the former Walden Wood estate built in 1911. Sadly, the home burned to the ground in 1961. 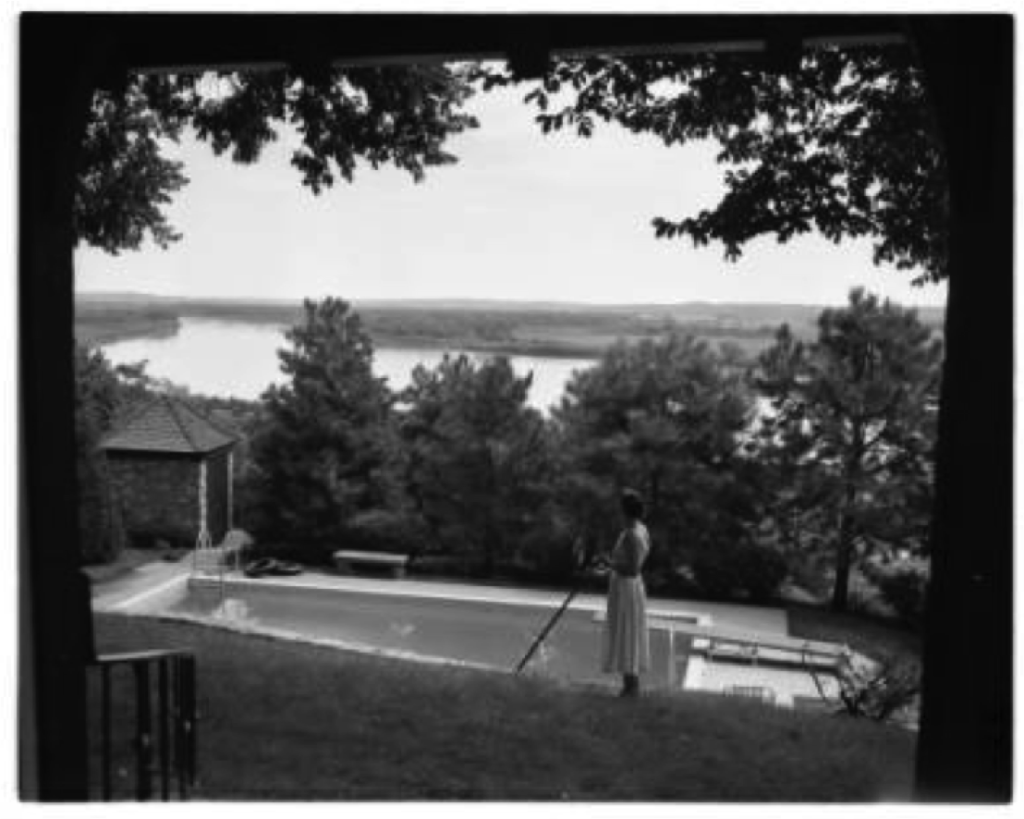 A view of the Missouri River from the home of Claude Reed at 9645 N. 29th Street in 1956. The original pool and pool house are still intact and can be seen on the Oct. 1 tour. Photo from the Bostwick-Frohardt Collection owned by KM3 and on permanent loan to The Durham Museum.

The trees that once composed the “Black Forest” have thinned since Native American tribes lived here. Even with fewer trees, the view from these hills remains a thing of beauty. From this neighborhood, you can see both the gleaming river and the tree clad hills that “make a perfect rainbow of color in the autumn.” Combined with an array of lovely houses, Wyman Heights is one of the most unique and charming neighborhoods in Omaha.

Author’s Note: In the process of researching my family history over the last decade, I’ve learned a lot about those ancestors with whom I share my last name. This includes the founder of Wyman Heights, who is my sixth cousin four times removed.