During the 1880s, a series of high-profile murders and other crimes attributed to drunkenness contributed to a growing public sentiment that the administration of laws against drunkenness and associated crimes (fighting, beatings, etc.) was lax. In addition, many of the states surrounding Nebraska had passed prohibition laws. As a result, the state legislature decided to take the question of statewide prohibition to the voters in November 1889.

The result was an overwhelming defeat of the amendment, with approximately 82,300 votes for it and just over 112,000 votes against.[1] There were charges of election fraud and voter intimidation, but these charges were either disproven or went unproven. After the vote, the Joseph Schlitz Brewing Co. of Milwaukee, Wisc., was determined to greatly expand its operation in Omaha through the establishment of company-owned saloons.

In December 1890, the Omaha World-Herald carried a story that stated that with the prohibition question settled, Schlitz had begun taking “active and vigorous” measures to increase their business in Omaha. The company previously had a wholesale agent in the city, and advertisements for Schlitz are found in newspapers as far back as the early 1880s. The company’s “scheme,” as the newspaper called it, was to buy corner lots throughout the city that the company felt would make good locations for saloons that would, in turn, sell Schlitz beer exclusively.

The newspaper also pointed out that Schlitz, already established in Omaha with an office and cold storage facility at South Ninth and Leavenworth, would likely have to expand its cold storage and delivery facilities, and suggested the Schlitz investments could have been worth up to $250,000 in new investment before it was over. Two agents of the brewery had scouted prospective locations and left a real estate agent with instructions to secure various parcels. “One by one,” the World-Herald ended its story, “outside firms recognize Omaha’s importance and recognizing it they hasten to take advantage of the opportunities presented to make money.”

What Schlitz and other breweries were doing was creating a network of “tied houses” throughout Omaha, South Omaha and Council Bluffs. Tied houses originated in Great Britain and are thus named because they are required to buy some (or in the case of the Schlitz saloons, all) of their beer from a single brewer. In some cases, the brewery owned the building outright or it merely executed agreements with privately-owned saloons who agreed to buy beer only from that brewer. This provided a steady demand for the brewers’ products and built up brand loyalty among a saloon’s patrons. Another reason cited for the practice was for the breweries to erect their own well-designed and better maintained buildings that contrasted with the “wretched structure occupied by the proprietors of low groceries,”[3] providing for better public order and attracting a higher class of customers.

Each of the large Midwestern brewers (and even some of the local brewers who participated) erected saloons with an identifiable architectural element: Schlitz saloons used the bartizan (an overhanging corner turret that projected over the building’s entrance) and Romanesque arched windows, while the Pabst saloons had square towers, crenellated parapets and Gothic-revival arched windows. 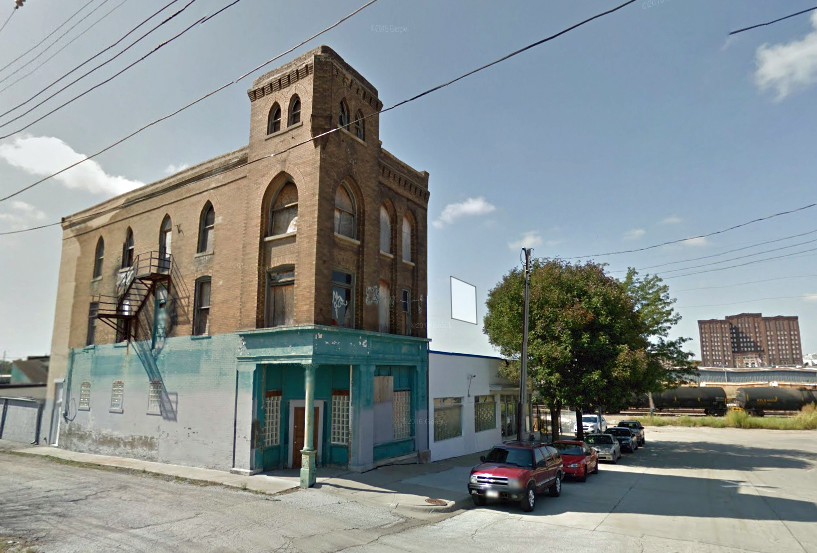 A former Pabst saloon at 2615 N Street in South Omaha. The Pabst Company bought the lot in 1898 and constructed the saloon building a year later. It is attributed to Otto Strack; either a stand-alone design or a variation on one of his designs for Pabst saloons in Wisconsin and Illinois. 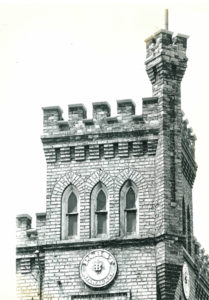 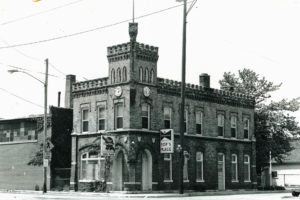 An Otto Strack designed Pabst building in Racine, Wisc. From these pictures, one can see the building’s Pabst trademarks. In Racine’s building, the medallion is still visible. Medallions had a gold letter “B” and a cluster of green hop leaves on a field of white with a border of red inscribed with “Pabst” or “Pabst Brewing Co.” and sometimes with “Since 1844.” 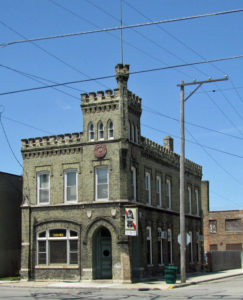 The 1892 Omaha city directory indicates that of the numerous saloons, Schlitz owned none (or at least none had direct reference to the company in their names), while the Pabst Co. had one (“Pabst Headquarters” at 1216 Farnam Street) and Charles Storz had one at 1402 N. 24th Street.[1]

By February 1891, Schlitz had already purchased two corner lots in South Omaha and was seeking others in Omaha. Not to be outdone, Anheuser-Busch of St. Louis also sought downtown property – near 14th and Farnam – to build a “merchants’ restaurant” and saloon to promote and sell its beer.[2]

By March 1891, Henry Uihlein, president of the Schlitz Brewing Co., personally visited the city, by which time the World-Herald estimated the company had invested over $100,000 in Omaha real estate. The newspaper suggested the company might construct an Omaha brewery in the future.[3] In April 1891, Uihlein had secured the purchase of the A.D. Jones homestead on the northwest corner of 16th and Harney for his “merchants’ restaurant,” paying almost $75,000, part of an estimated $200,000 investment in city property since December 1890. Uihlein left his company secretary, Eugene Wuesthoff, to attend to further purchases.[4] Days later, the company’s investment was estimated to be closer to $400,000: large lots, with over 100 feet in street frontage, on 20th and Vinton streets; corner lots in South Omaha on 24th and F streets and Q Street and “the viaduct” for future saloons, and two more at 33rd and L and 33rd and Q streets for hotels.[5] Wuesthoff was quoted as saying, “We realize there is a great future in Omaha, and we want to be considered as old citizens and friends, not strangers.”[6]

One real estate advertisement in April 1891 details the amount and location of parcels purchased by Schlitz Brewing Co. in South Omaha alone, purportedly from a “list of actual sales” since Jan. 1, 1891. The list provides the lot, block number and purchase price for each parcel purchased by Schlitz for a total investment of just over $30,000 in the first quarter of 1891 in South Omaha:

This does not mean the company built saloons on all these parcels, but it at least bought them, perhaps to construct saloons or another commercial building on them later. Schlitz was not the only company that bought property for the purposes of building its own saloons, hotels and restaurants. 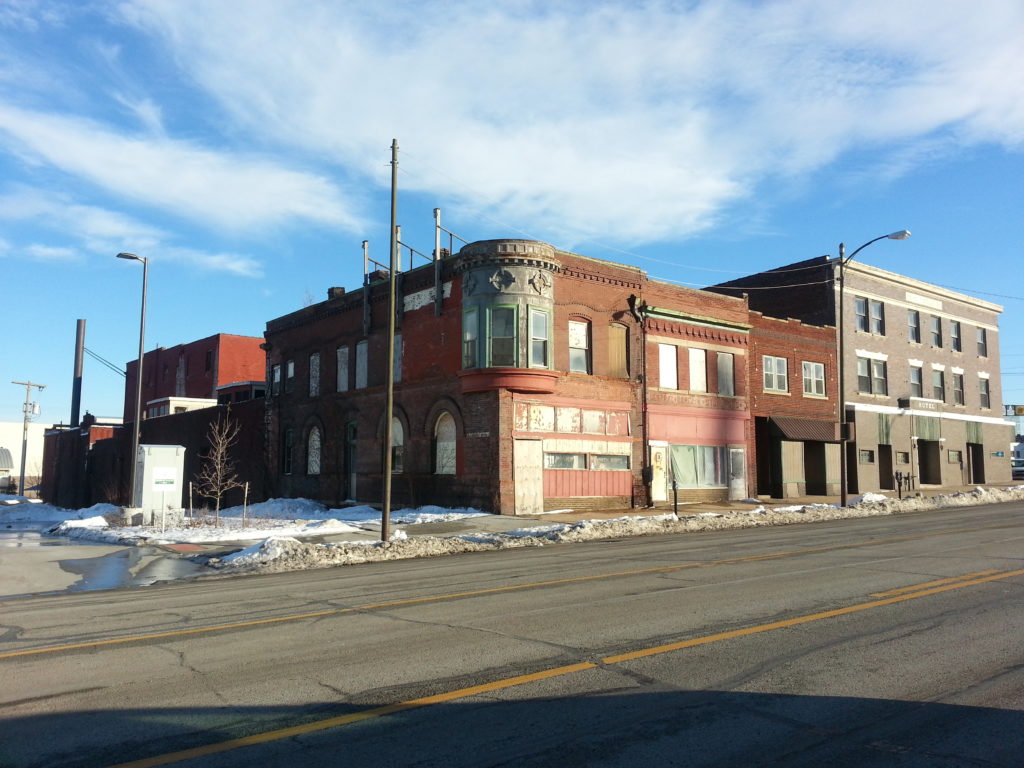 This two-story building at 611 N. 16th Street was constructed by Schlitz Brewing Co. for approximately $5,000 circa 1897. It was recently bought to restore.

Below is a non-exhaustive list, in no particular order, of known saloons, hotels and other buildings constructed and/or occupied by the various brewers in Omaha from approximately 1890 to 1910. This does not mean to imply all these saloons were active at the same times, but that the various brewers have been identified with them at least for the years indicated. In some cases, a building may even have been built by one brewer and later occupied by another.

Suspect others? Let us know at info@restorationexchange.org or comment below.