Local landmark status recognizes buildings for their historic and architectural significance. The designation helps protect the buildings from demolition or defacement and makes them eligible for the State Historic Tax Credit program – an incentive that may allow the owner to complete additional preservation projects and updates. The Omaha Planning Board and Omaha City Council are expected to approve the landmark status, said Kristine Gerber, Restoration Exchange’s executive director. 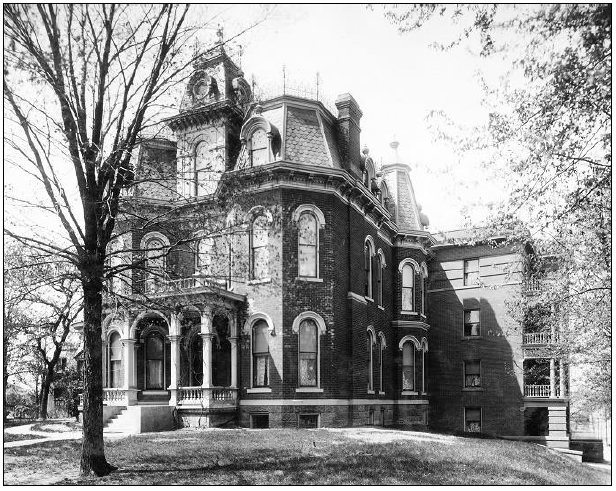 The Cornish Mansion is a two-and-a-half-story masonry residence located on the southwest corner of South 10th and William. Joel N. Cornish purchased the land for the home in 1886 on Omaha’s original “gold coast.” He hired Council Bluffs architect Styles Ezra Maxon, who designed it in the Second Empire architectural style. Construction was completed in 1887, and Cornish, his wife and four children moved into the home in 1888.

Cornish was a New York-born lawyer who moved to Iowa in 1854. While serving in the Iowa cavalry during the Civil War, he was appointed a colonel by President Abraham Lincoln; he kept the title for the rest of his life. After the war, Cornish turned to banking, organizing the First National Bank of Hamburg. While in Omaha, Cornish organized the National Bank of Commerce and was also involved in the Midland State Bank, the Carter White Lead Company and the Omaha Real Estate Owners’ Association.

Shortly after Cornish’s death in 1908, the mansion was converted into apartments. Despite that change, the house retains many of its original interior historic materials and details such as carved wood window and door trim, doors, stairs and mantles. Many floors contain an ornamental parquet design.

Much of the striking exterior retains its original integrity, including the arched central entry and windows with hoods, porches and dormers, the mansard roof covered in “fish scale” slate tiles and the central cupola.

About a block north of the Cornish lies the White House Apartments building. Built in 1885 as a residence for Episcopal Bishop George Worthington, the building is a two-and-a-half-story brick structure designed in a variation of Queen Anne style by Detroit-based architect Gordon William Lloyd.

Worthington named his residence “Bishopthorpe.” It was part of an “ecclesiastical campus” that Worthington developed within two blocks of his home. The campus included Brownell Hall and St. Matthias Church, which served as a local Episcopal parish and as a chapel for Brownell, which was originally an all-girls school. Worthington, known as a builder, was responsible for the construction of nine churches, a new Brownell Hall and the original Clarkson Memorial Hospital in Omaha.

The house was sold in 1909 and renovated to house the Presbyterian Hospital, following a long tradition of renovating once-fashionable homes of the wealthy for use as hospitals, orphanages and other institutions. St. Catherine’s Hospital, established in the nearby residence of Herman Kountze, is another example.

The Presbyterian Hospital later became the Lutheran Hospital, then the Lutheran Home for the Aged. The Sons of Italy purchased the property in 1954. They soon converted the main building to apartments and used the carriage house as their social center. The name White House Apartments was first used for the former mansion in 1958.

“Restoration Exchange wishes to thank all those who donated to the Giving Tuesday campaign,” Gerber said. The organization will again set its sights on adding to the local landmark rolls during the upcoming Omaha Gives! campaign. The official day of giving is May 24, though donations will be accepted starting May 1.

Gerber said Restoration Exchange is gathering recommendations for properties in North Omaha from people who live and work in the area. Two properties being considered are the former St. Benedict’s School – which now houses the Bryant Center, and the long-closed Carnation Ballroom. Other locations throughout the city are being considered for the protective status, as just over 100 buildings in the city are locally landmarked.