Preservationists past and future were applauded at Saving Places, A Preservation Celebration March 3 at the historic Paxton Ballroom. The event – which included a silent auction, live auction, dinner and video awards program – raised $48,000 for Restoration Exchange. Proceeds will go toward carrying on the organization’s mission of educating and motivating the public to restore and preserve older homes, buildings and neighborhoods. 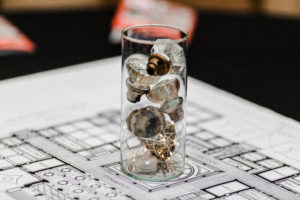 Architectural plans served as table runners at the event, and architectural salvage brought a touch of the past to centerpiece vases.

The ballroom was filled to capacity, with more than 220 lovers of old and historic homes and buildings attending. Awards in the form of architectural salvage from Waverly High School in Waverly, Neb. were presented to five award winners and honorary chairs Mark and Vera Mercer.

Auction items were geared toward preservation and history, including Omaha memorabilia and artwork, and overnight stays in National Register homes and hotels. The oral auction prize was a weekend trip to Chicago featuring lodging in a Lincoln Park condo, a $250 Visa gift card and architectural tours of the city. The gala, the second one held by REO, fell on the eve of the 12th annual Restore Omaha Conference, which was held on the Fort Omaha campus of Metropolitan Community College. 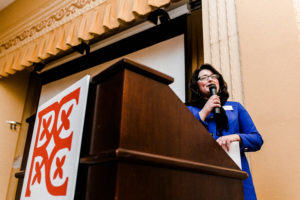 “What a wonderful weekend to celebrate outstanding examples of revitalization at work in our community and recognize, and have in the audience, those individuals who have made preservation happen for decades and those just getting started, said Kristine Gerber, executive director of Restoration Exchange. “We hope everyone walked away from the weekend knowing preservation is happening every single day in Omaha.”

The AIA (American Institute of Architects) Omaha Preservation Award was presented to Alley Poyner Macchietto Architecture for the Flats on Howard. Judges from the Preservation Alliance of Minnesota were impressed with the size, scale and complexity of the project. They lauded the transformation of 16 “extremely neglected buildings” and the return of “a sense of community and life” to the broader area.

The Residential Preservation Award – recognizing excellence in preservation, rehabilitation, or renovation of a single-family home – went to Carrie Derrick for her restoration of a Mercer Park home. Derrick dug deep into the past to research the home. She sought out and met many of its former residents to gain insight into the restoration.

The Building Preservation Award went to AO* for its transformation of the White Rose service station into Dundee Bank’s Blackstone neighborhood branch office. “This project stands out for the difficulty in conversion from a former restaurant use to a commercial bank,” the judges wrote. They praised the “sense of place” the restored building now fosters.

Nicole Malone won the Young Preservationist Award, which recognizes achievement by a person under age 40 who is making an impact by promoting and advocating for preservation in the Omaha area. An architect with AO* for the past 14 years, Malone has been instrumental in growing the Restore Omaha Conference and is a founder of Restoration Exchange. 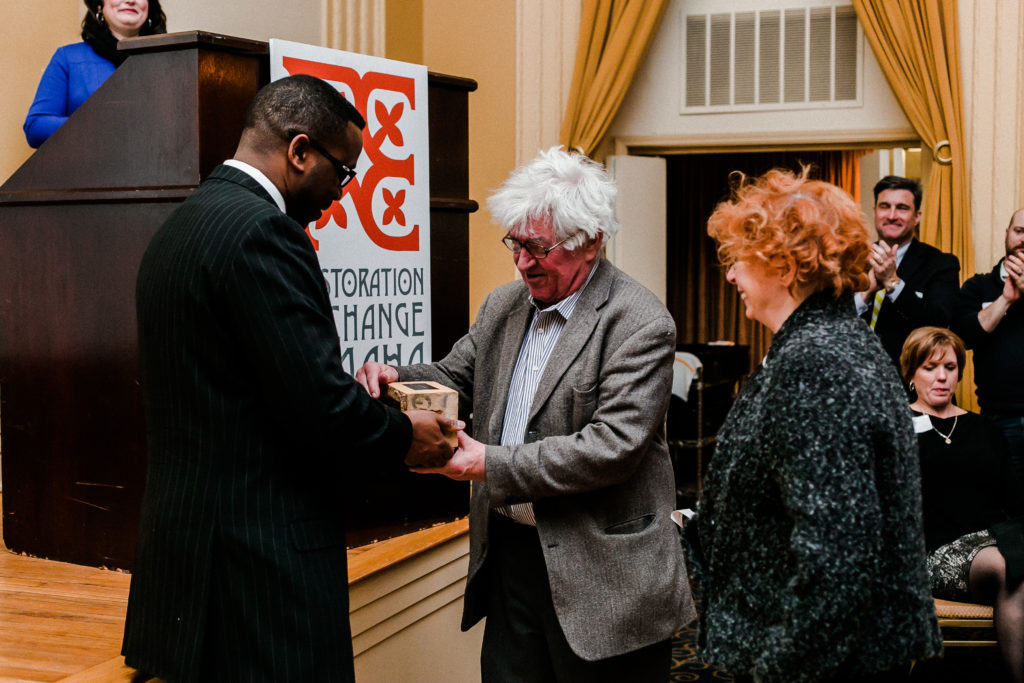 Awards in the form of architectural salvage from Waverly High School were presented to five award winners and honorary chairs Mark and Vera Mercer, pictured above.