Kumi Hisano, an architectural conservator with EverGreene Architectural Arts, began researching the murals in the Douglas County Courthouse in 2016. View a gallery of this work in progress below.

If you know your Omaha history, then you are aware that a riot took place in 1919 when Willy Brown, a local black worker, was lynched in front of the Douglas County Courthouse for allegedly raping a white woman. Two others were killed, and Mayor Edward Parsons Smith was nearly hung himself. A crowd of more than 4,000 white men laid siege to the courthouse where Brown was held. They lit the interior of the building on fire. Eventually Brown was given up in exchange for the safety of those still in the building, and he was lynched and his body mutilated.

That event dramatically altered the history of the murals on the interior of the Courthouse, which were badly damaged by the fire. They had been painted by William Rau and installed after the completion of the courthouse construction in 1912. The canvases curved inward over the open rotunda as they rose in the dome, and the upper portion of the canvases was burned beyond repair.

The mural history had been forgotten until the fall of 2016 when Kumi Hisano with EverGreene Architectural Arts began researching the murals as part of the current restoration effort. BVH Architects have been working with the Douglas County Building Commission on a 15-year effort to replace the skylights, restore the internal laylights (the art glass panels visible on the interior), and now the final phase is the work on the murals, with EverGreene completing the complicated historical restoration work. Skylight leaks had affected the adhesion of the canvases to the plaster surface, which were preliminarily tested in 2008 during the skylight repair, and a plan and scope was determined.

As an architectural conservator, Kumi specializes in painting restoration and leads the current EverGreene team of five. She started with extensive historical research and was able to piece together the date of the installation, the repainting and a chronology of the other conservation efforts over the last century. Scaffolding was erected above the upper floor to give the team access to explore the condition of the murals and then to clean, repair and restore them. During this exploration process, it was discovered that the top of the canvases were gone, and the murals had been completely repainted – the lower areas painted over the existing canvas, and the upper portion painted directly onto the plaster.

Kumi discovered that four of the paintings had been changed in 1922 when William Baird repainted the murals after the fire and changed the images in a dramatic way. Originally, the north, south, east and west murals depicted the human history of Nebraska, while the four smaller murals on the corners between the large murals depicted natural scenes of the prairie. When they were repainted, they were changed to tell a story. The four main canvases were changed slightly, and figures were added to the corner murals to tell the history of Omaha/Douglas County starting on the south and moving clockwise to a contemporary (when painted) view of Omaha.

Work will include removing the south canvas, which was delaminating from the plaster, and renovation of the other three main canvases. The corner canvases did not require restoration, and all eight will receive a new protective varnish on the surface. Paint was removed layer by layer from the surrounding ornamental plaster, and it was discovered that much of the original gold-leaf was gone. New gold leaf is being applied, and the dome structure holding the leaded glass is being repainted with bronze powder to match the original colors.

Work is scheduled to be complete this spring.

EverGreene has been working in Omaha for more than 15 years, and its work includes the ceiling restoration at Saint Cecilia Cathedral, the Nebraska State Capital interior and the Joslyn Castle interior. Kumi has worked for EverGreene for 17 years as a painting conservationist and was on the team restoring the lobby of the Empire State building in New York City. 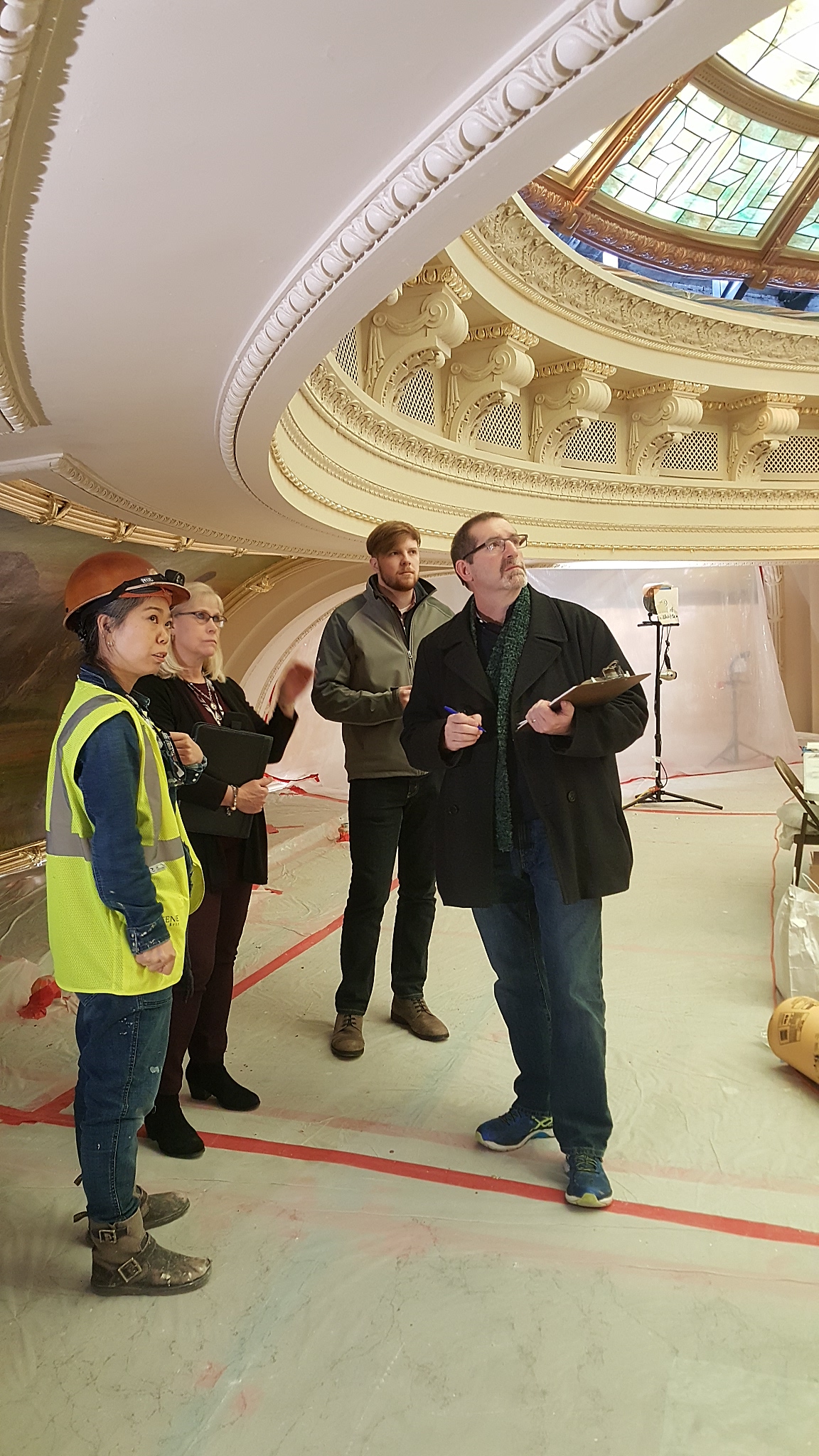 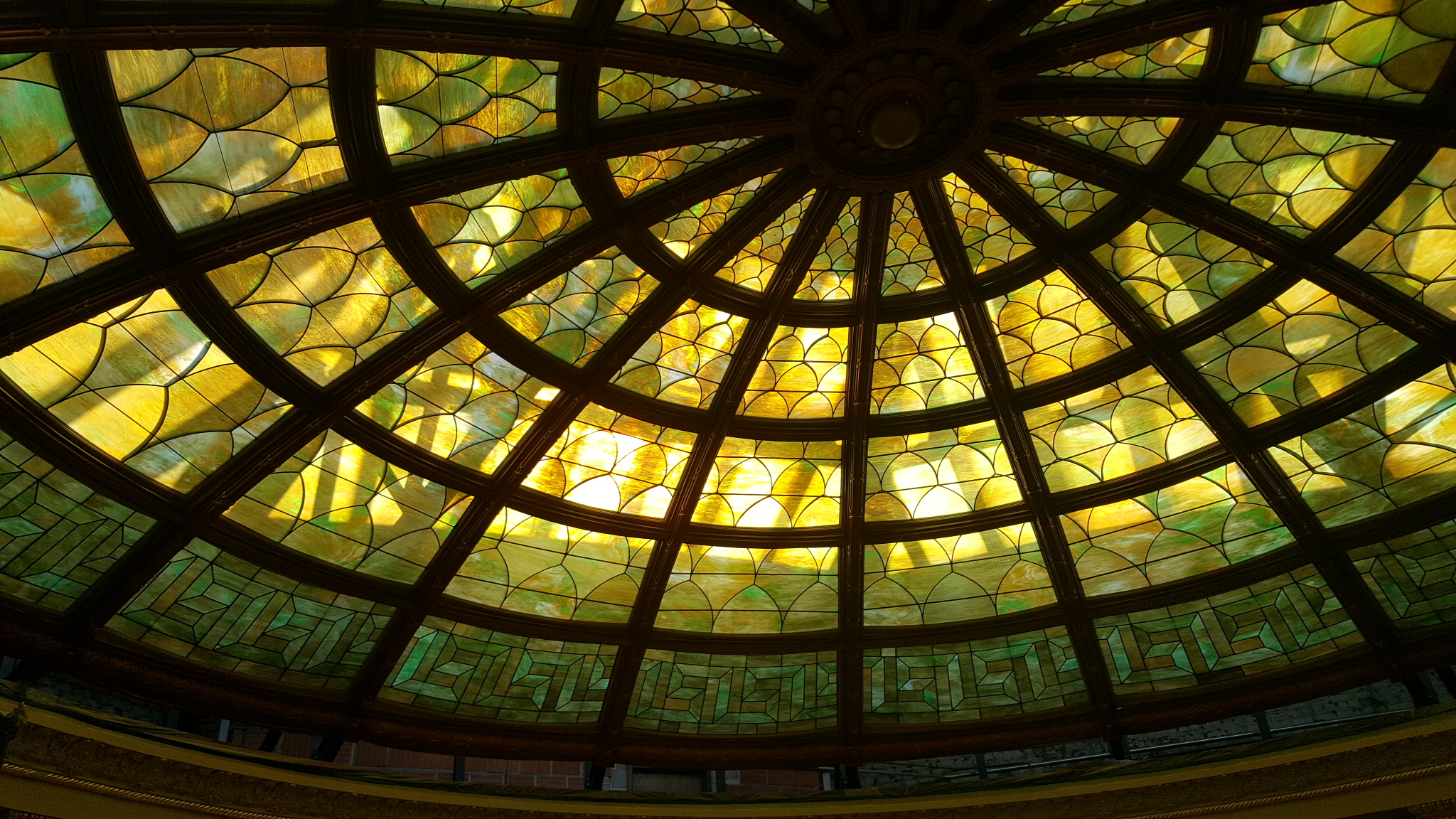 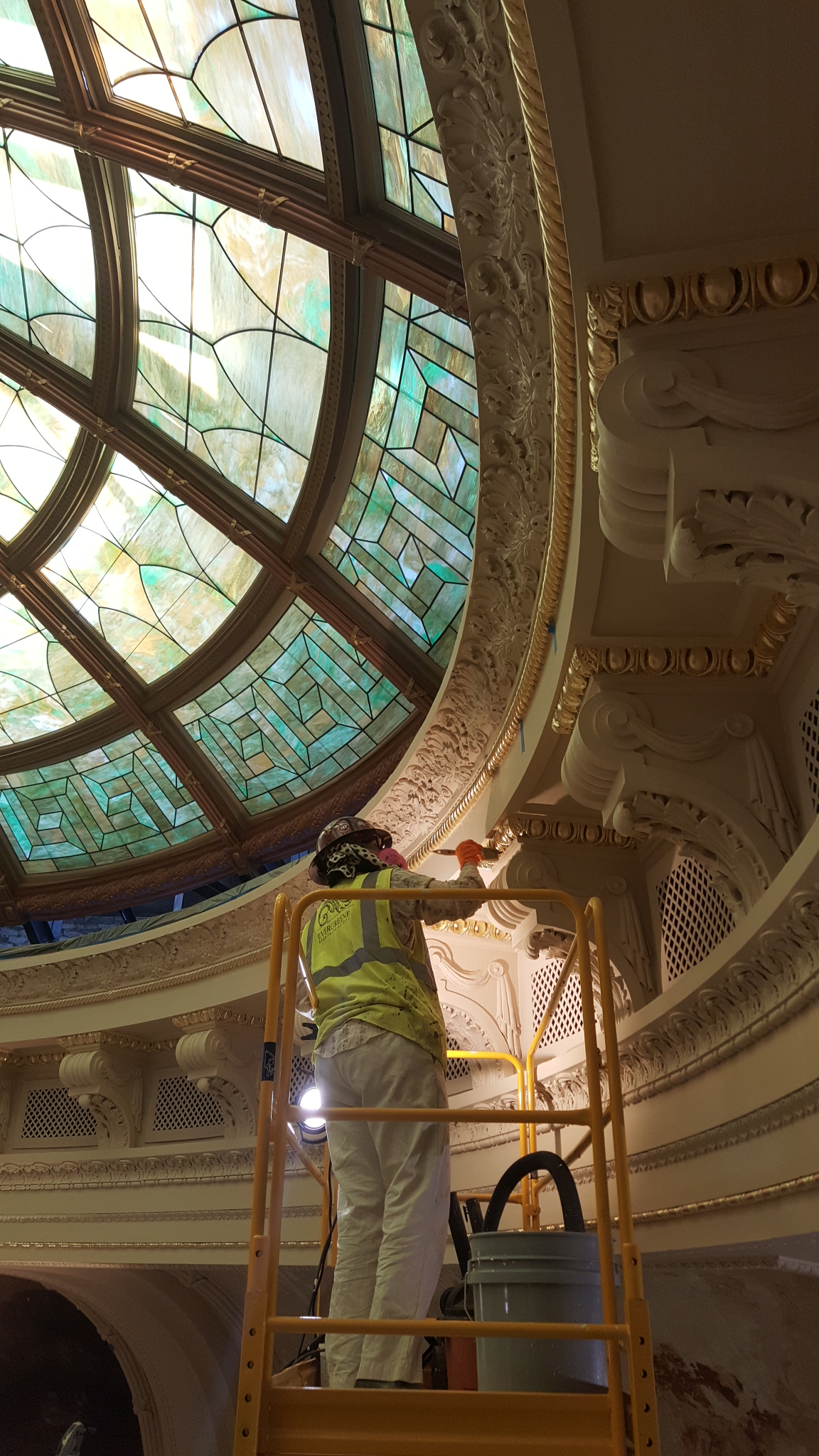 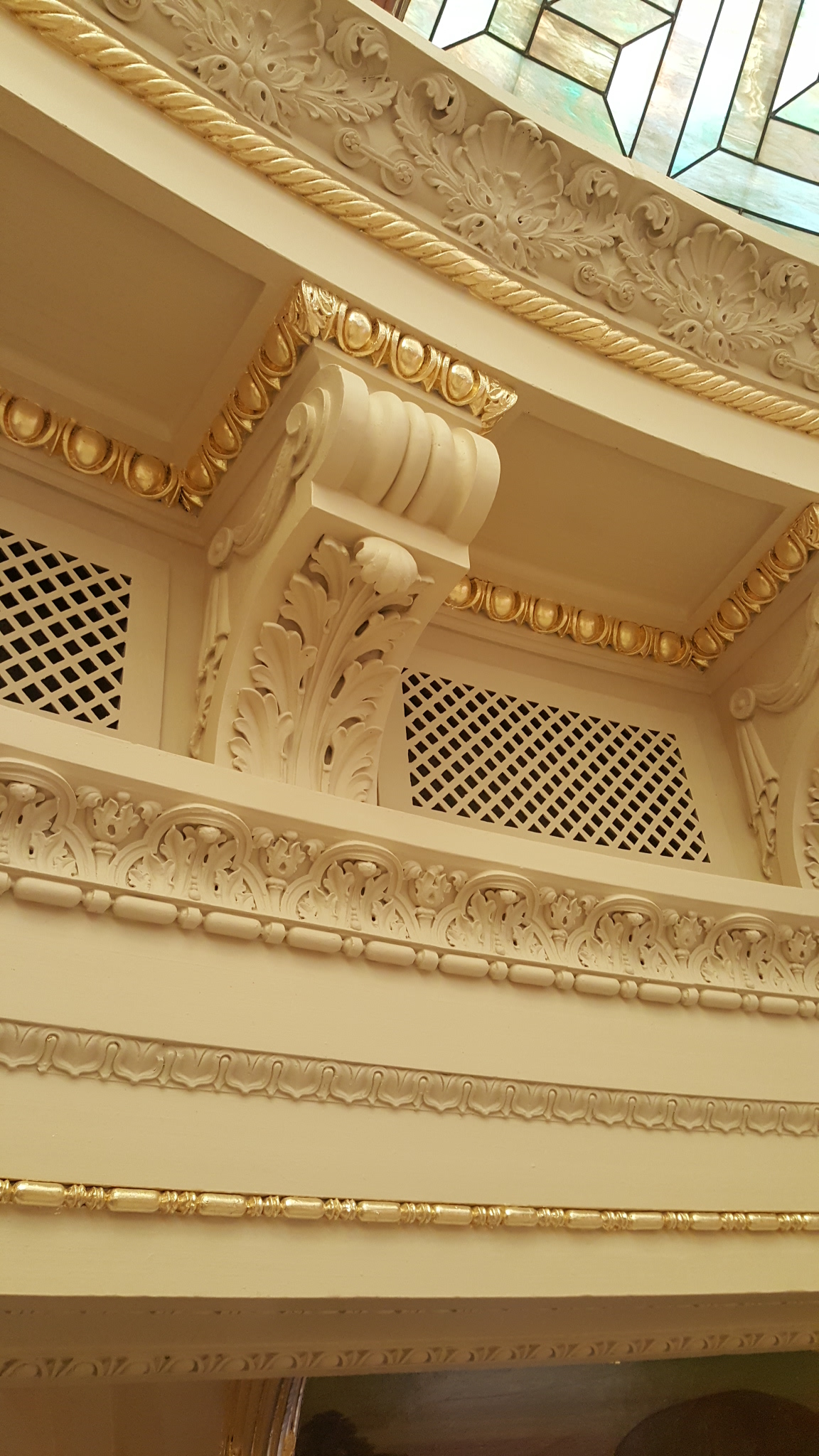 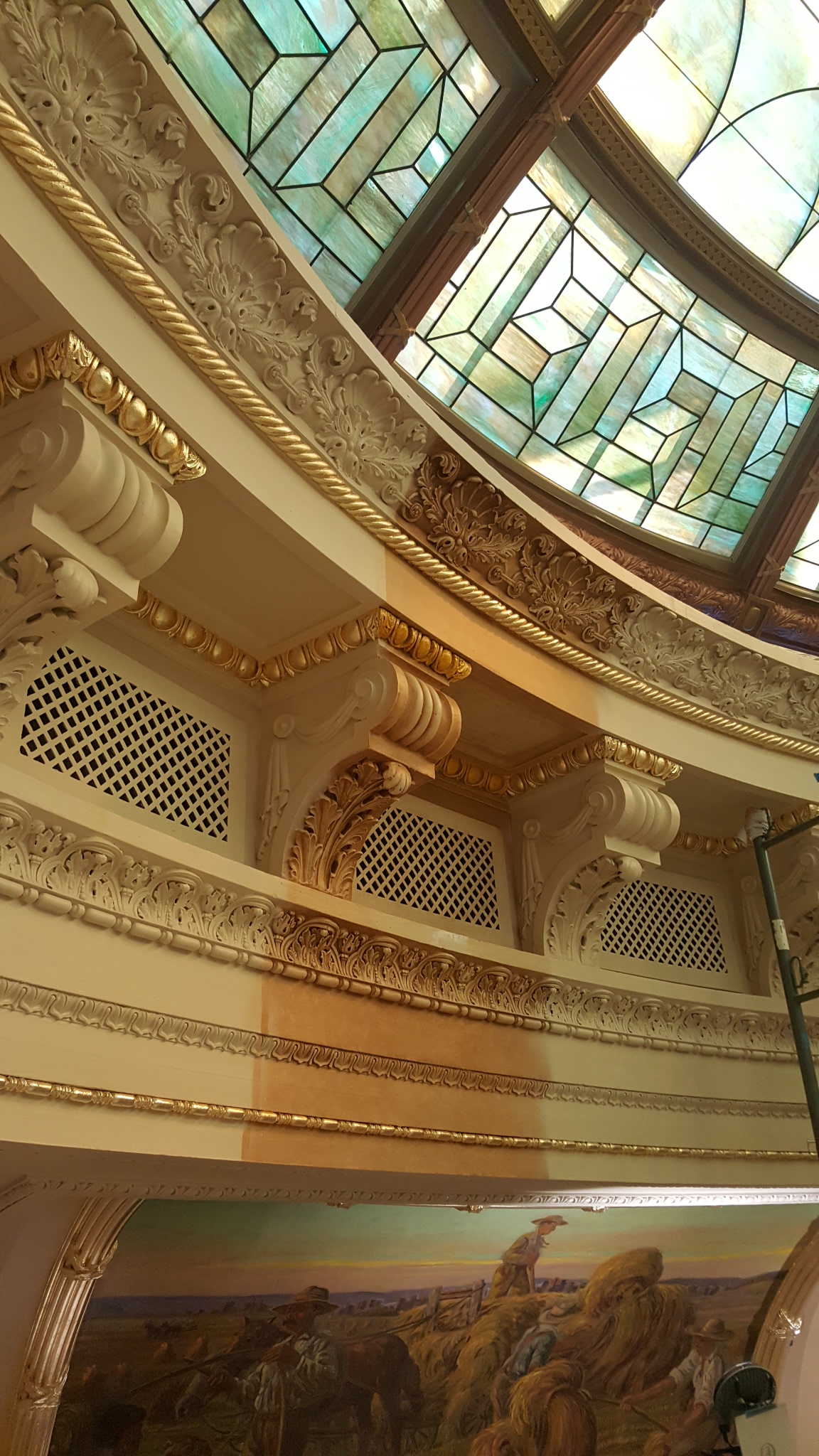 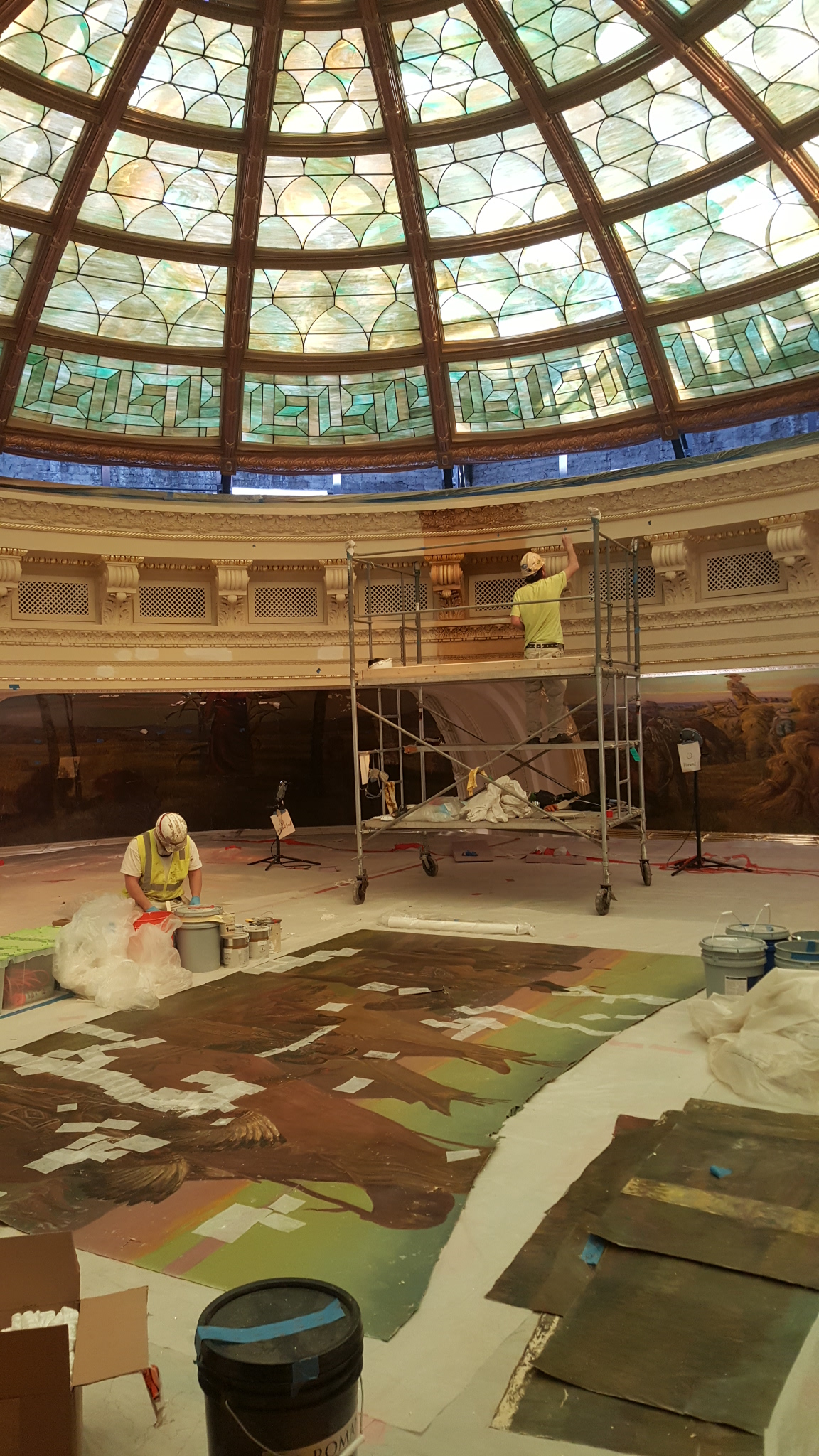 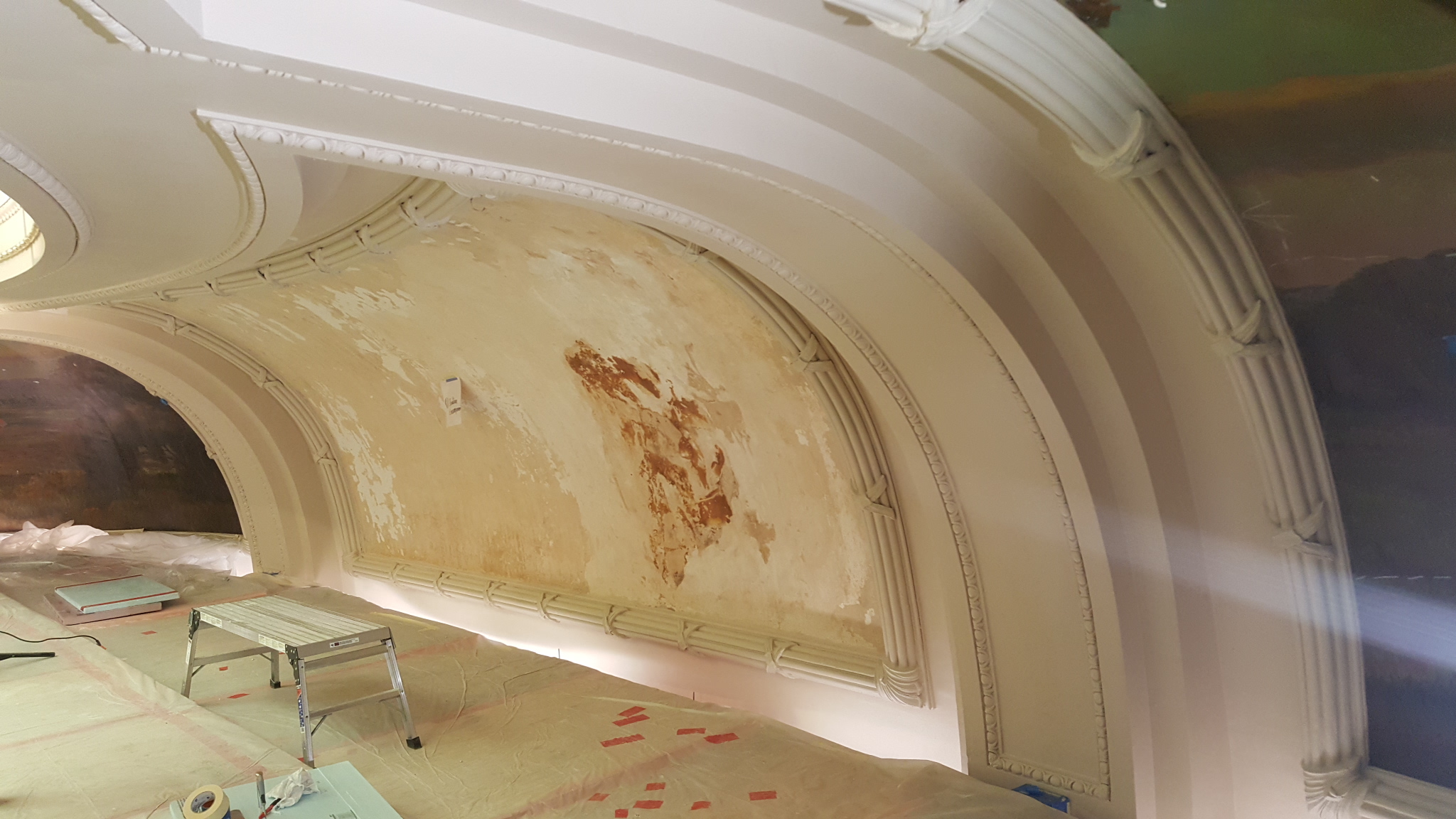 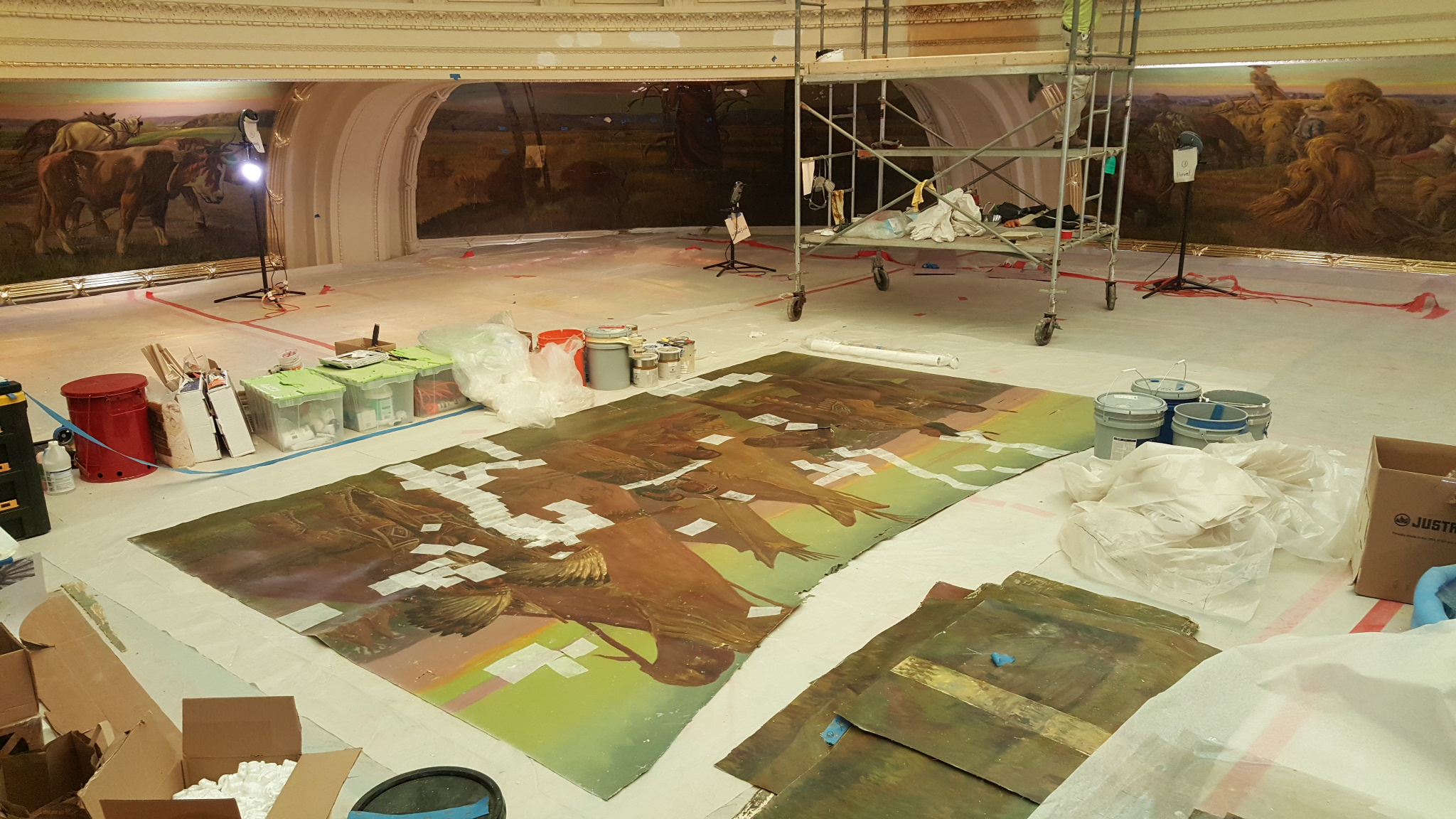 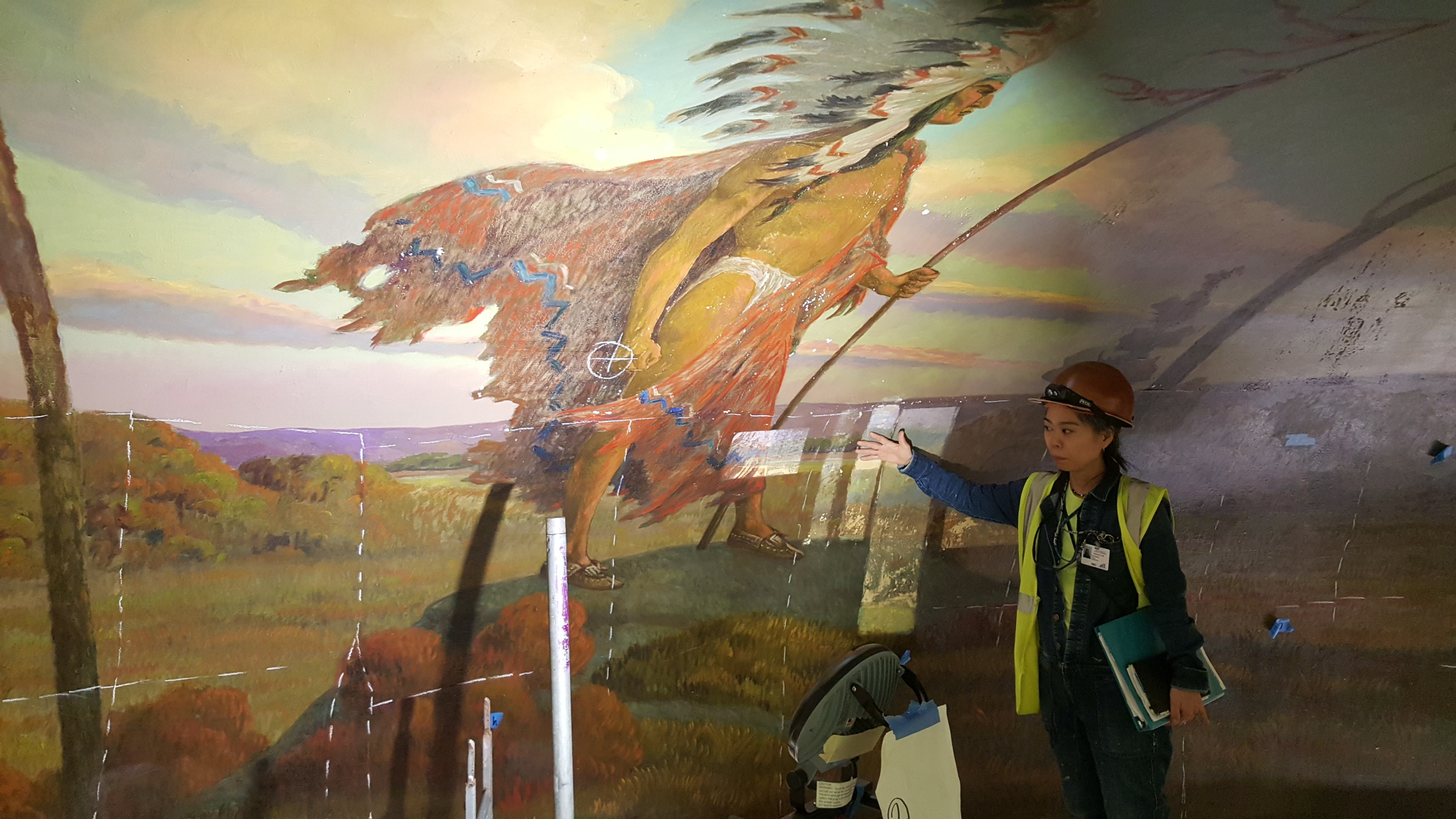 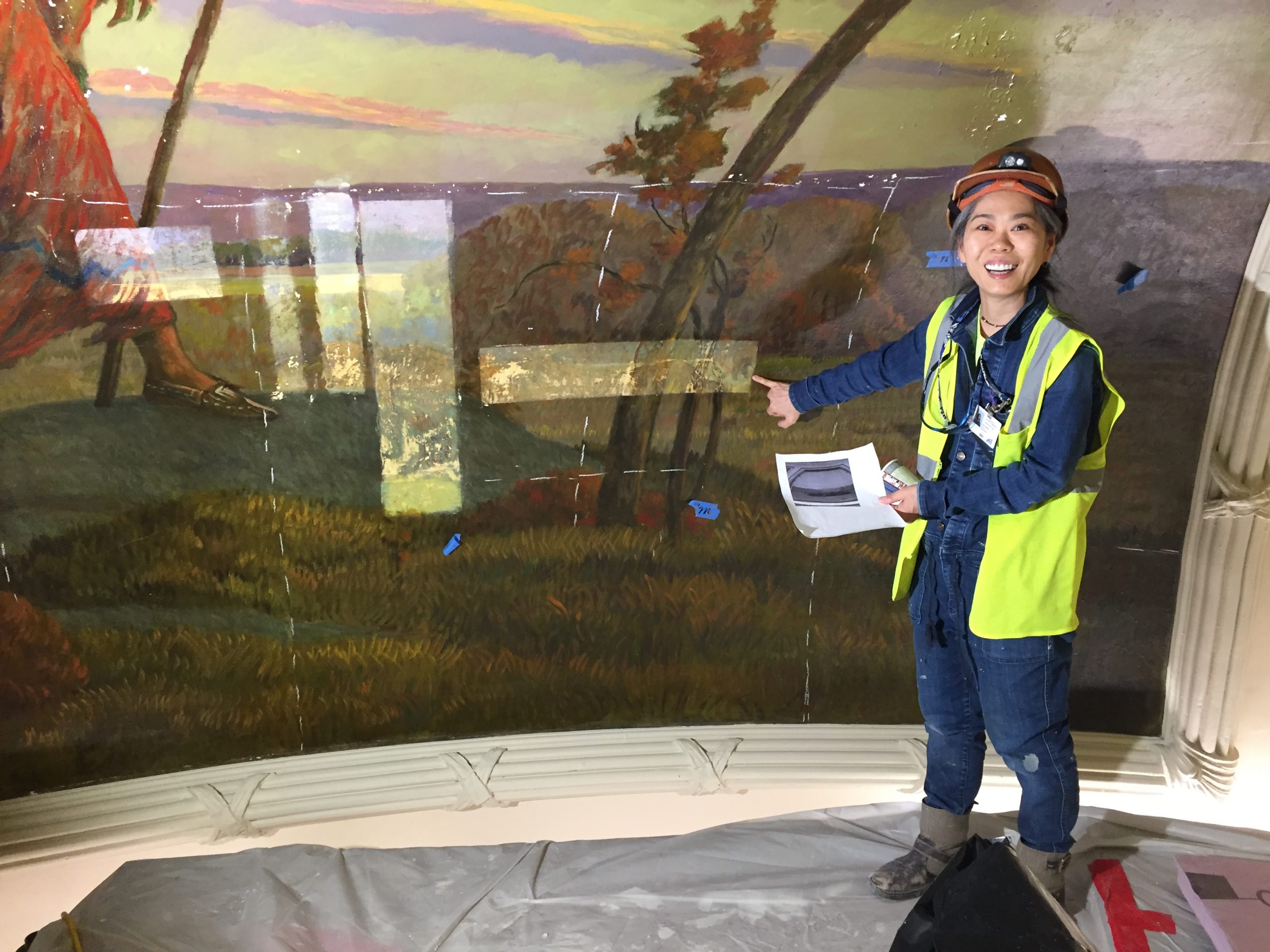 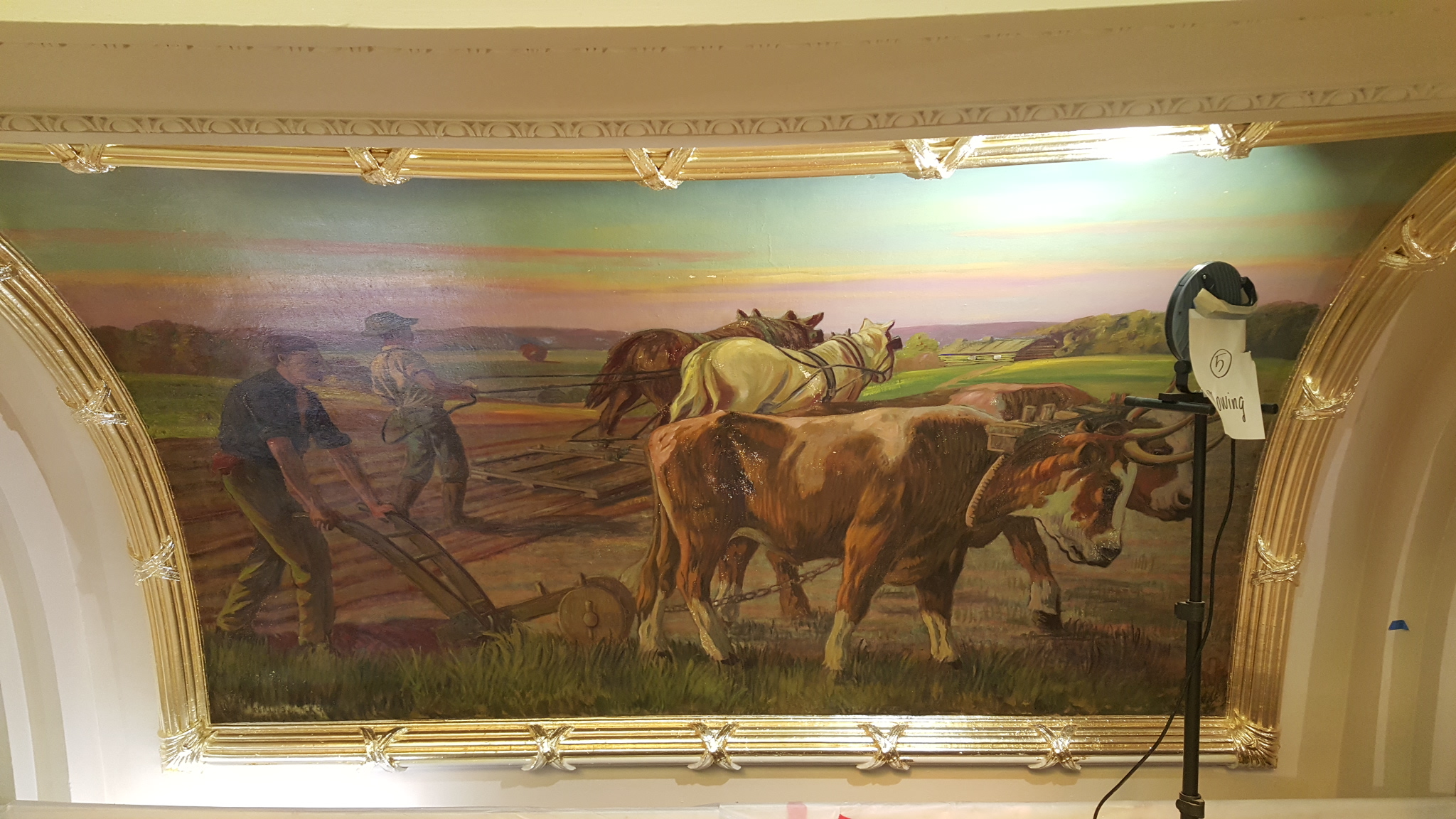 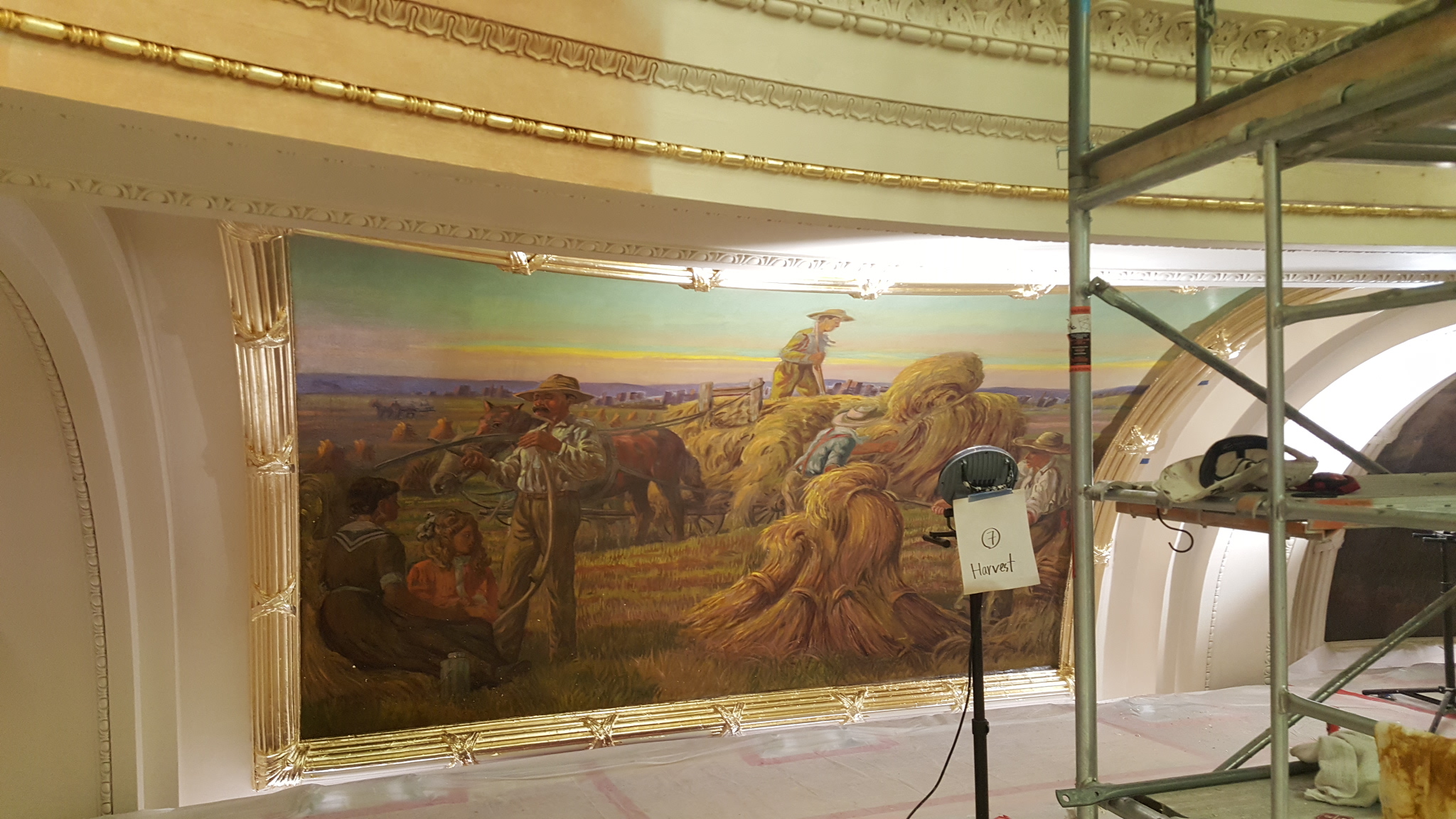 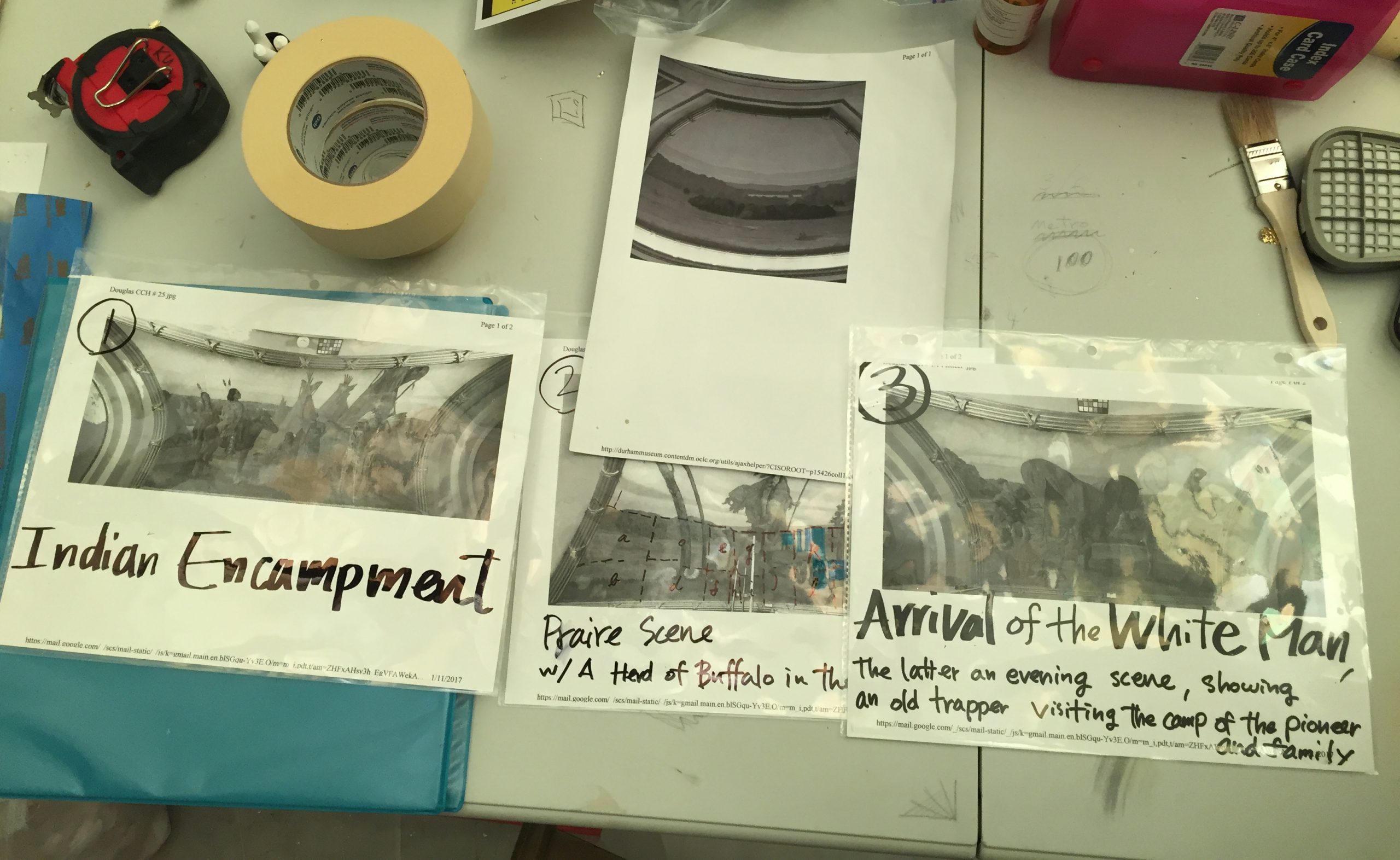 01 The interview:
REO members Bill Stott, Nicole Malone and Ben Luedeman are discussing the work in the dome with architectural conservator Kumi Hisano with EverGreene Architectural Arts, and Lori Hedlund with the Omaha Douglas Public Building Commission. The project is being supervised by Dan Worth with BVH Architects.

02 Renovated Laylight:
The renovated decorative panels of the laylight and beams, completed in 2008.

03 Installing the Gold Leaf:
Most of the original gold leaf was missing – likely from the fire. New gold leaf is being installed in the original locations.

04 Gold Leaf installed and Plaster Painted:
New gold leaf is being installed on the plaster details and fresh coat of paint everywhere else – both matching the original finish.

05 Finish Mock-up:
The gold leaf and painted plaster with a layer of varnish protection installed – darkening the paint. All new work will match the approved mock-up.

06 Work in Progress:
Workers are installing new gold leaf and repairing the murals with the recently renovated Laylight (decorative glazing panels below the skylight) above.

07 South Mural Location:
Due to years of roof leaks, the south mural was delaminating from the plaster below, so it was fully removed and is being restored on the floor. The skylight and laylight dome under were renovated in 2008.

08 South Mural Removed:
The south mural is being repaired and renovated under the center of the dome. A copy is being made for historical records.

09 Northwest Corner Mural:
Conservationist Kumi Hisano from EverGreene Architectural Arts explaining the process of discovery and restoration of the murals. The light rectangles represent areas where built-up paint was removed down to the original painting.

10 Explaining the process:
Architectural Conservator Kumi Hisano explaining the process of discovery. The original northwest mural was a prairie scene with a herd of buffalo. When it was repainted in 1922, the buffalo were painted out and an Indian figure was added. The lighter rectangles represent test areas where the finish and paint were removed layer by layer down to the original. Kumi shows a black and white reproduction of the original, and points to a buffalo figure uncovered in the paint removal process.

13 Original Images of the Murals:
Research uncovered the original mural images, showing what they looked like prior to the fire in 1919.