Special thanks to Brent Lubbert for creating our 2017 heart-bombing video.

A ballroom. A meat market. A school. A drugstore. A 19th century warehouse. Earlier this month, each structure received a little love from local preservation advocates during Restoration Exchange’s third annual heart bombing. Held each February, the event is designed to draw awareness to abandoned buildings and prevent needless demolitions. Volunteers cover vacant historic buildings with homemade valentines to showcase their potential for reuse.

2711 N. 24th Street – Carnation Ballroom
What the Dreamland Ballroom in North Omaha was to jazz in the 1930s and 40s, the Carnation Ballroom was to soul and rhythm and blues in the 1950s. The building was constructed in 1923/24 for $12,000. In May 1925, it became home to the Adler & Forbes Bakery. Despite a fire in the building Feb. 1, 1931, and a bankruptcy in 1933, the Forbes bakery was a part of the building until it was sold in May 1939. AmVets Club and The Savoy nightclub were in the space until Omaha Star Publisher Mildred Brown purchased the building in 1948 and named it for her favorite, always-present accessory. In the Carnation’s early years, Brown hosted events such as style revues, healthy baby contests, talent shows and record hops. Between 1955 and its close in 1959, the ballroom featured acts such as Fats Domino, B.B. King, Ray Charles, Chuck Berry, Charles Brown and Little Richard. James Brown played the club twice in 1957. The location served as a boxing club during the 1960s and later as an after-hours bar known as Afro Delivery and a variety of businesses in the 1970s and 1980s. Rodger Criswell Garage took over the space in the 1980s until he retired in the early 2000s. It has been empty for several years.

1723 Vinton Street
The building at 1723 Vinton St. was constructed in 1890. It appears to have served as a small grocer/meat market up to the mid-1920s, after which it served as a shoe repair shop until the early 1960s. It also included one or more second-floor apartments. In the 1960s and 1970s, it housed a local office for the Greater Omaha Community Action (GOCA) and VFW Post 9551. Its last known tenant was Vinton Street Antiques.

1722 S. 16th Street
Built in 1928-29 as St. Joseph School and Community Center, the brick building was designed by J.M. Nachtigall, a German-born architect who came to Omaha and worked with Thomas R. Kimball early in his career. Nachtigall is mostly associated with Roman Catholic religious buildings in the “Rundbogenstil” or German round arch style, so much so that he was referred to as the “German Catholic architect.” The building features rows of large windows with double-hung sashes to bring maximum daylight and fresh air into the classrooms and details such as brick panels, stone water tables and cornices, and carved stone door surrounds. Newspaper accounts indicate the community center/auditorium had its own bowling alley and that it was the site of church celebrations and events, school and community plays, and neighborhood recreation. Enrollment peaked in the 1930s-1940s, and high school classes were added in 1939. The elementary school faced dwindling enrollment during the 1950s through the 1970s and was closed in 1982. The high school closed in 1983.

1624 Cuming Street (Fitzgerald Boarding House)
The building was built in the former Jefferson Square neighborhood circa 1908. In its early history, the corner commercial space was occupied by a series of drugstores. By the mid-1930s, the building featured three commercial storefronts along Cuming (1620-1624) and three “flats” to the north along 17th Street (903-915). By around 1950, the building was owned by H.G. Fitzgerald and became known as the Fitzgerald Apartments. It was later converted into a boarding or rooming house and operated as such as the neighborhood declined from the 1960s until the 1990s. The Fitzgerald closed in 2006, and the building has remained empty since.

1114 Florence Boulevard
The building was built in two parts: the south half was constructed circa 1890 as the Stephenson & Williams livery stable tied to a house next door. By the early 1900s, it was part of the Omaha Van & Storage Co. and served as a warehouse. The northern half was constructed around 1920 in a similar architectural style. By the 1960s, the building was used for general storage. It is one of a few remaining examples of 19th century warehouses in the area and was recently identified as an “active resource” in the North Omaha Historic Building Survey completed in June of this year, meaning it is a likely candidate for both state and federal tax credit rehabilitation programs. 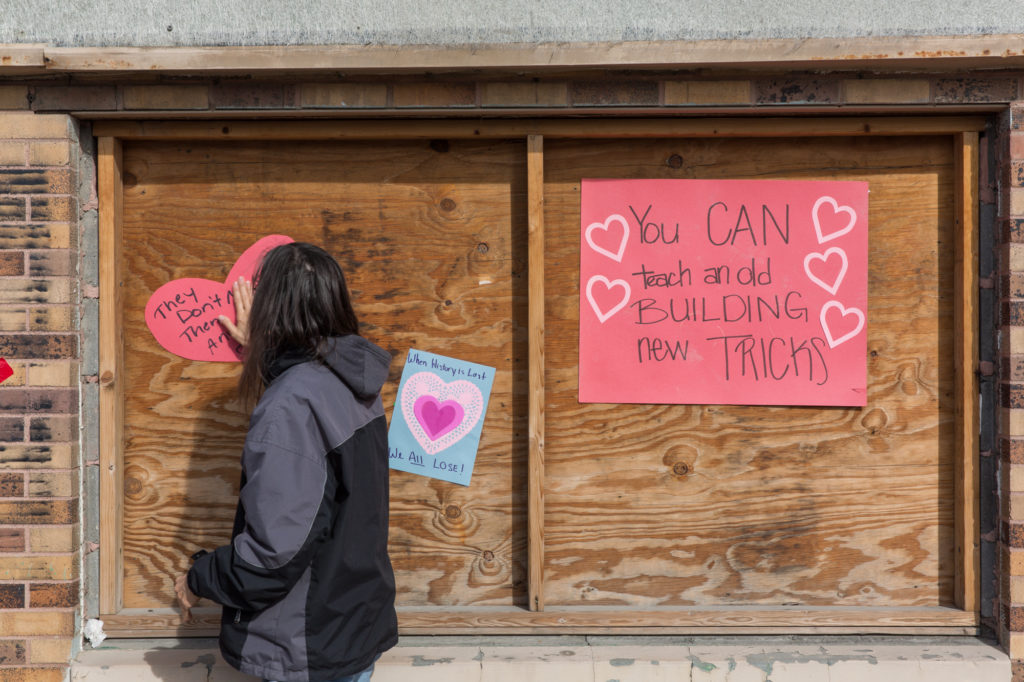 Got an idea on how to breathe new life into any of these locations? Let Restoration Exchange know at info@restorationexchange.org.