Members Only Midtown Tour A Success 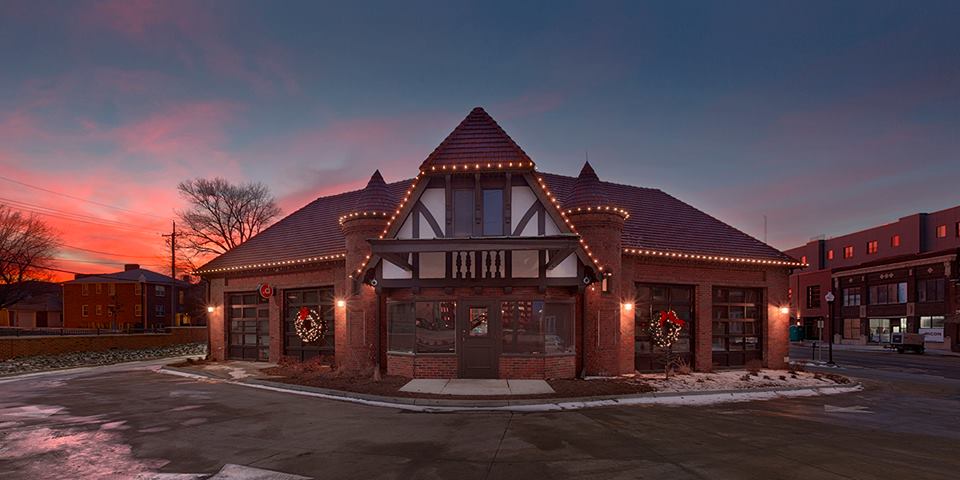 It was hard to picture McFoster’s Natural Kind Café once inside Dundee Bank’s sleek new home in the Blackstone district. Harder still to imagine the White Rose service station that initially occupied the building at 38th and Farnam Streets.

Restoration Exchange Omaha members were invited to view the 1930-built structure during a members-only tour on Dec. 7. Many of those in attendance had fond memories of McFoster’s, which catered to vegetarians and Bohemian types during its 20 years in the building.

While the exterior is nearly intact, the interior shows vestiges of the former businesses in the tile floors and brick chimney. The turret-like chambers, which formerly housed restrooms, have been repurposed. The bank, architects AO and contractors Dicon Construction took extra care to preserve the history of the building while making it beautiful and functional. The building was a contributing property as part of the Gold Coast District nomination for the National Register of Historic Places in 1997. The nomination states that the building exhibits Tudor elements such as turrets, half-timbering and a red clay tile roof. REO worked with AO to complete the Part I and Part II tax credit forms to allow the owner to receive state and federal historic tax credits for qualifying restoration expenses.

Also open to tour was the Danish Brotherhood building, just across Harney Street. REO staffer Patrick Thompson wrote the nomination that was approved earlier this year adding the 1966 building to the National Register of Historic Places in its first year of eligibility. The building will eventually be converted to office space for Dundee Bank.

About 100 people attended the tour, in advance of the bank branch’s official opening on Dec. 30.