Oct. 2 Tour Has Something for Everyone 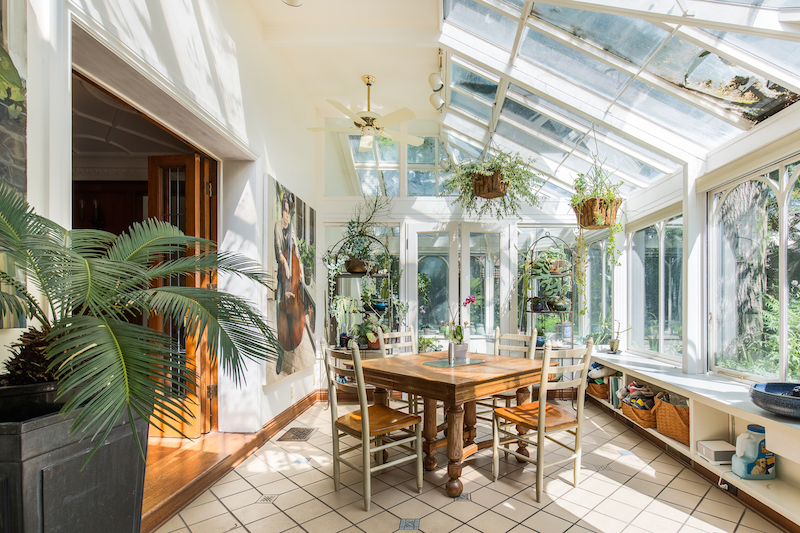 Over the years, garden lovers have had three chances to view the flowers, trees and shrubbery at 5611 Leavenworth St. The first, in 1933, invited guests to view Peggy Robertson’s cacti collection in the conservatory, along with the gardens throughout the backyard. Owners also welcomed garden lovers in 1979 and 2003.

This Sunday, Oct. 2, owners Rebecca Anderson and William Minier will open their impressive English Tudor home for the first time to a tour group. It’s one of nine homes on the REO Fall Neighborhood Tour that highlights the Aksarben neighborhood. The tour starts at the nearby Mt. Calvary Lutheran Church.

The gardens at the Minier-Anderson home will be a featured part of the tour, as will the conservatory/sunroom, one of the first remodeling projects the owners tackled after moving from Waterloo in 1986. Anderson said a previous owner built an addition that “looked like a prison pillbox on the back of the house.” That addition had to be subtracted. “We decided to take off the original greenhouse, take off that addition and unify the entire back of the house with this conservatory/sunroom.” 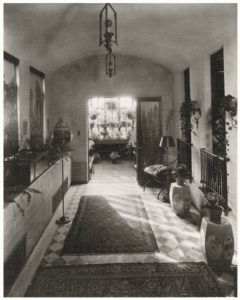 A historic photo of the consevatory from the Bostwick Collection.

The owners were pleased with the home’s features, and it met many of the items on their wish list, including a wood-burning fireplace, separate dining room, a library and original wood. Though many of the rooms were covered with carpet, most of the woodwork was free of paint. The couple has done much of the painting, wallpapering and paint stripping on their own.

Maintaining the home’s original look has been important to the owners. “I don’t consider myself slavish to preservation, but insofar as it is possible to maintain structural integrity and design integrity and still achieve a functional space, I try to do that,” Anderson said. “I’m not a preservationist so much as a restorationist. I don’t have to have everything historically accurate.”

The Minier-Andersons have now lived in the house longer than any previous owners. Anderson said she hopes it will maintain its current state of repair in the future. “We’ve done a fairly decent job of keeping up with the maintenance, but it’s always a challenge.” One unseen functional accessory was the addition of a geothermal heating and cooling unit.

Minier is a retired family medicine physician. Anderson is an attorney who teaches law and ethics at the Nebraska Medical Center. She frequently hosts large groups of medical students at the home for book discussions.

“It’s a nice atmosphere for that kind of gathering,” Anderson said. “It’s big enough to have a reasonable number of people without feeling cavernous, and it doesn’t feel excessively formal,” she said.

For one day, the public is invited to view this lovely home and its eclectic furnishings. Anderson described the couple’s decorating style as “things we found over the years at estate sales” mixed with old family pieces. “I think it works together reasonably well.”