The History Behind The Barn 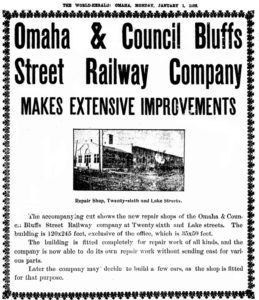 “Workmen are tearing down the big old car barn at Twenty-sixth and Lake streets that has been a landmark in the north end of the city,” the newspaper report stated.

Recent article? No, it was back in 1905. The article from the Omaha World-Herald stated, “This barn is a relic of the old horse car days, built as the crowning effort of the street railway architecture of those days, designed as headquarters of the famous old ‘Green’ and ‘Red’ lines.”

The barn was only 20 years old, having been built in 1885 with stalls to hold 234 horses. With the advent of electrified streetcar lines, the building had fallen into disuse. The World-Herald article continued, “All the other horse car barns have been torn down and now the last of the horse car barns ceases its ignominious purpose as a street railway junk shop in its later years.” It wasn’t a total loss; the lumber was to be used for a new hall on 24th Street.

Today, that horse barn’s replacement is a 111-year-old brick building constructed as a repair shop. After streetcar service ended in 1955, the City of Omaha took over the building. It’s been used for vehicle repair and street maintenance operations until recently.

Public Works officials announced plans to demolish the building in favor of a parking lot. Part of the building façade would be made into a monument.

At least two interested buyers have been identified, thanks to Restoration Exchange Omaha volunteers. Those interested in redeveloping the Fisher and Lawry-designed edifice have proposed reuse as a music venue, a food co-op, a drone training center or a vinyl listening library. Discussions are happening with the City of Omaha now to create a win-win situation for both parties – the City of Omaha to get nearby land to build the parking they need and the former streetcar barn repurposed to help revitalize the 24th and Lake area.

For more information on why Restoration Exchange supports saving the streetcar barn and on ways you can voice your support and reuse ideas, please visit our REO Advocacy page.