A DIY Renovation That Respects Its Past 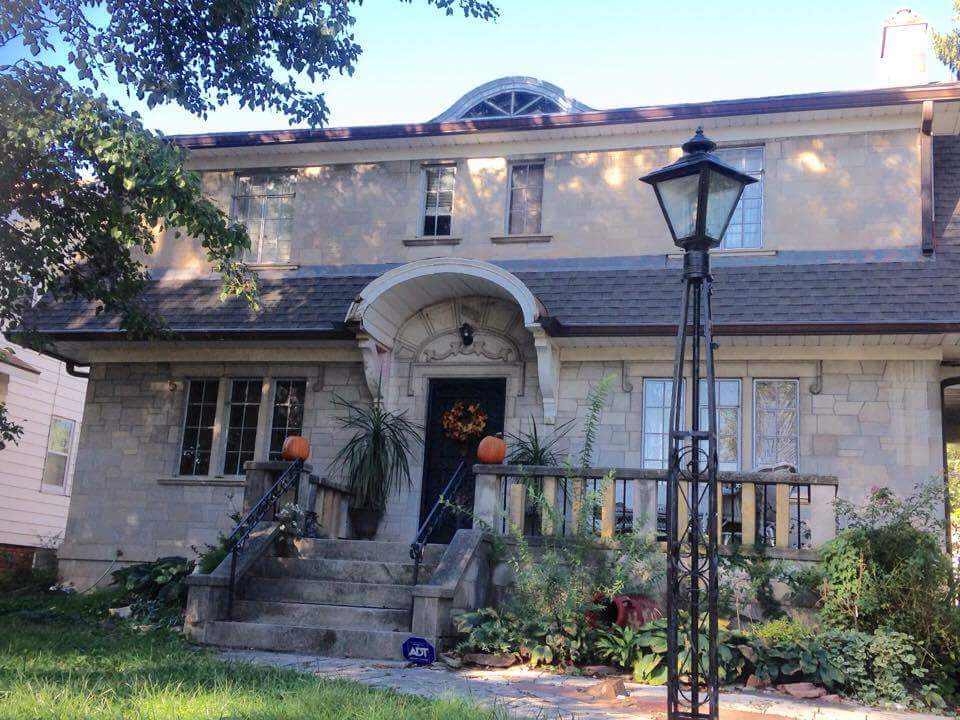 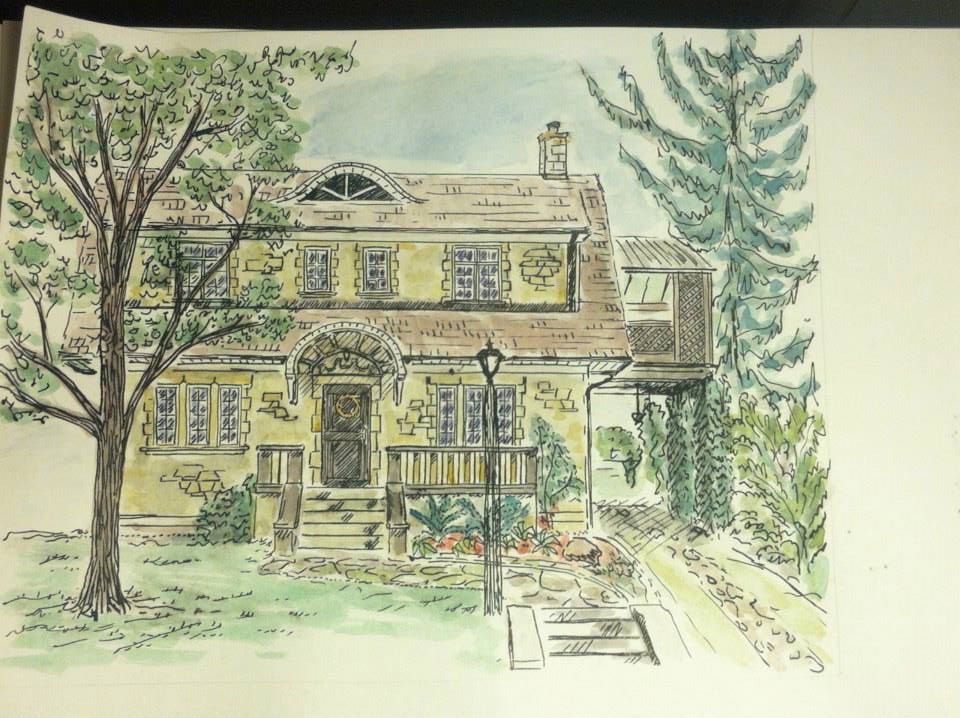 A painting of the home’s exterior by a friend of the owner.

Sometimes, you just have to have vision. 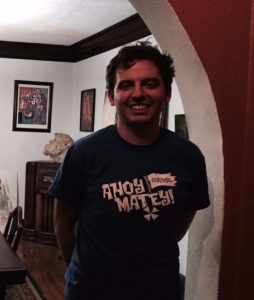 By the time Adam Van Osdel first walked through the property at 2734 N. 45th Ave. in Omaha’s Holy Name neighborhood, birds had taken up residence. A massive railing that once graced the front porch had tumbled into the yard, and the landscaping was a tangle of tree limbs and weeds – a sinister combination that would frighten even the hardiest of Halloween treat seekers.

But Van Osdel, who grew up on the same street, was transfixed by the exterior – an unusual pattern of Indiana limestone. “It looked like an art piece, and it had good bones,” he said. The combination convinced him to submit a bid on the HUD home, which was eventually accepted.

“I was a first-time homeowner with a lot of work to do, but I grew up in an older home where we were always fixing things and going to antique fairs,” Van Osdel said. “I’d also renovated a Benson duplex that my grandmother owned, so I felt ready.”

Before the University of Nebraska at Omaha theatre graduate had a chance to dig into the renovation process, the grandchildren of the home’s original inhabitants discovered he was the new owner and contacted him. “I set up a time for them to tour the house with their grandmother, who grew up there,” Van Osdel recalled. “She talked about how she, at age eight, and her father would visit the building site every day to check on its progress.” 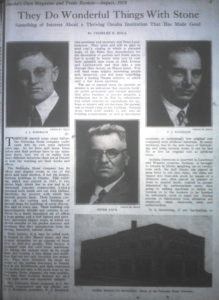 Armed with the last name of the original owners, Van Osdel, a special projects designer and exhibit coordinator at The Durham Museum, headed to the Omaha Public Library’s archive section to do more research. “I jumped head first into some microfilm and found articles and ads for the Nebraska Stone Company, which was owned by the father – he built the home for his family,” he said. “I was then able to find pictures of the company in the Durham Museum’s photo archive. It was a beautiful two-story building on Leavenworth. It’s now a parking lot.”

Energized by his historical findings, Van Osdel established his overall goal: replicate the artisan appeal of the stonework exterior on the interior. His first task was investigating how much winter damage the property had suffered during its years of neglect. “I took eight pickups full of stuff to the dump. I turned the water on, and it went through a wall in the basement. I patched every hole I found – there was work to be done everywhere I looked,” he said.

Working plumbing and a bedroom became his first priority so he could move in. “I wore a coat inside that first winter – the furnace, circa 1942, topped out at 52 degrees, so it had to be replaced,” he said.

During the past four years, virtually every surface in the two-story home has been touched in some way. Van Osdel estimates his projects are somewhere between 70 and 85 percent complete. “To some, I appear unorganized, but there’s a method to my madness,” he said. “I’m most concerned about process.” 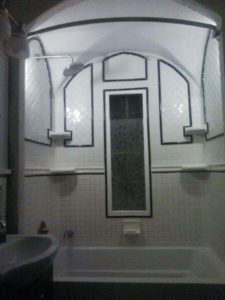 His proudest achievement to date is the tile renovation in his master bath. “I love the way it turned out, and I have a new appreciation for people who lay tile for a living,” he said. “My uncle, who restores organs for cathedrals in Salt Lake City, said it looked like it was original to the house.”

The self-proclaimed ‘duke of free and cheap’ said the property really began to feel like home when he purchased a dining room table at an estate sale. 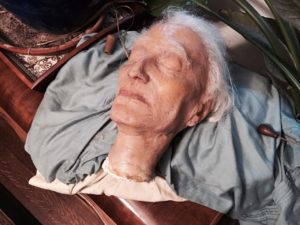 From the BLUEBARN Theatre’s production of “Two Tall Women.”

Today, that table is surrounded by the things that make him happy – dramatic paintings he’s both purchased and created, scented candles, an antique radio (a $5 find) and a pair of severed heads that signal his other passion – special effects props and makeup.

The theatre major, who once considered architecture as a career, has film credits for special effects makeup and teaches classes at Iowa Western Community College. And oh, by the way, the giant chrome steer sculpture in front of the Fareway Meat Market at 89th and Center? That’s his work as well.

“My grandfather was a mortician, and my mom was an art teacher – I think it all contributes to who I am today,” he said.

His advice to do-it-yourself restorers:

No matter what restoration task he’s pursuing, Van Osdel is constantly reminded of the care and thought the original builder put into the creation of his stone wonder. “It may sound cliché because I work in a museum, but you need to preserve the past to understand the future – I really think that’s true,” he said. 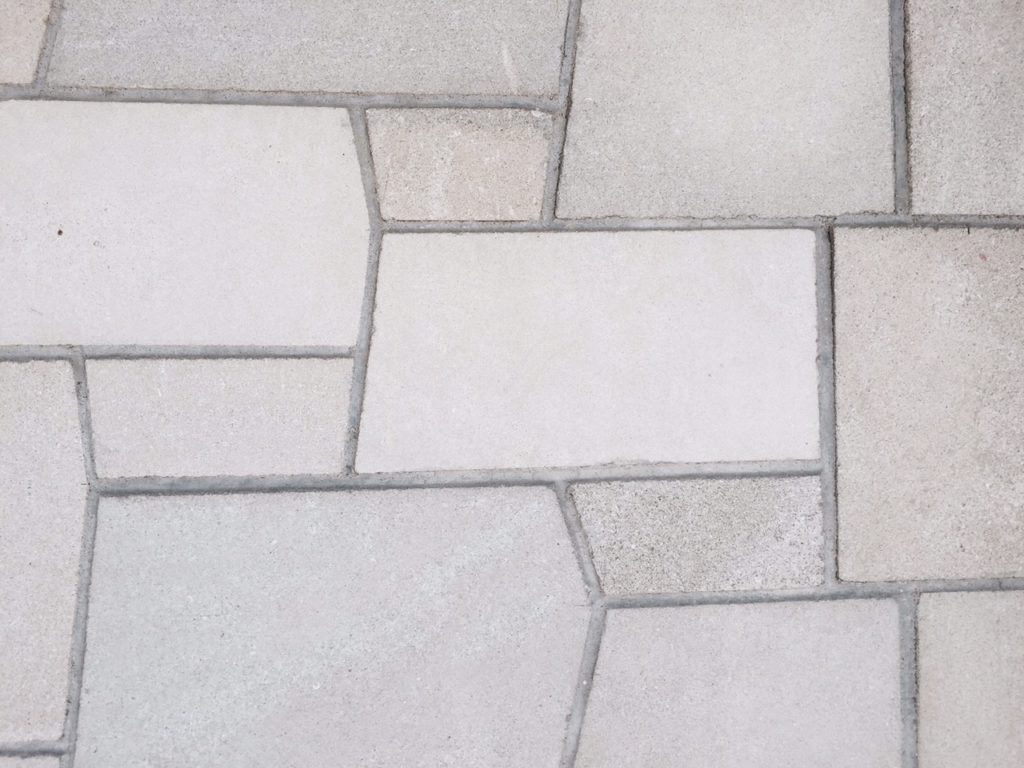 A close-up view of the Indiana limestone that drew Van Osdel to the house.