They had just four hours to prove their case. They only needed three.

In early February a team of architects assembled by Restoration Exchange Omaha met with a design team from HDR to offer alternative ideas and suggestions regarding the proposed expansion of the Holland Performing Arts Center. 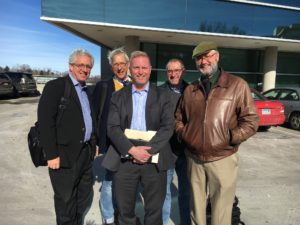 They called themselves the Gang of Five – Paul Jeffrey of BVH Architects, Michael Alley of Alley Poyner Macchietto, Christopher Johnson of Leo A Daly, Bill Stott of The Architectural Offices and Randy Milbrath of RDG Planning & Design. The architects—each with decades of building design and historic preservation experience—developed three design ideas to meet the requirements of the Omaha Performing Arts Society (OPAS), all while preserving the historic properties on the site. Within two weeks of the meeting, OPAS dropped its plan to acquire three century-old buildings at 11th and Douglas Streets.

OPAS announced it was dropping the property acquisition plan on Feb. 15, just a few days after a contentious Omaha City Council hearing in which several people spoke in opposition to the plan.

The arts group had initially proposed demolishing the buildings in favor of a new facility addition with parking, programming, performance and retail space. The matter was further complicated because OPAS had agreed to sell a nearby parking lot to HDR as the site for its new headquarters building. Despite the opposition to tear down the buildings at 11th and Douglas Streets, people expressed support for the Holland’s expansion and HDR’s building site across the street.

The Gang of Five, too, was supportive of the Holland’s expansion. “We all felt that the Holland was a positive cultural presence in the city and we as a group wanted the efforts of OPAS to succeed,” Stott affirmed. HDR and OPAS were “positive partners in this effort,” Stott said. “There was never any attempt by OPAS or HDR to bias us or steer us in any specific direction.”

OPAS Executive Director Joan Squires had asked for recommendations, advice and comments from a group of architects “relative to the Specht building” after the public criticized the Holland expansion plan and the likely demolition of the buildings at 11th and Douglas. The Christian Specht building is the only building of the three that is locally landmarked and listed on the National Register of Historic Places.

The Gang of Five approached the site at 11th and Douglas from a different perspective than Omaha Performing Arts or its long-time design firm, HDR. “Their assumption was based on wiping the site clean,” Stott said. “HDR designed a solution to meet OPAS’ requirements. The assumption was that if they left those buildings (standing), they wouldn’t be able to meet their requirements.

“The Gang took the opposite approach. We treated it as if there was something cost prohibitive to remove, and then designed around it. We were still able to meet all their space, parking and use requirements.”

Jeffrey called the design review process “a very efficient, powerful means of studying options and taking advantage of the design talent and skills beyond just one firm.” It represented a case of “one plus one equals three” mentality, he said.  “Some may say ‘only in Omaha’ does this work—for we are a tight community and a close community of architects, striving for what is best for Omaha beyond just ourselves.”

Stott noted that, collectively, the architects worked approximately 120 hours in preparation for the meeting. They met at HDR headquarters with design principal Dave Lempke and two other representatives of the firm. “We met a number of times before this meeting but had little information from either HDR or OPAS, so we were trying to forecast what issues we might face.”

Though the Gang’s original intent was to analyze the issues and provide professional input and recommendations, the architects ended up creating a solution based on parking requirements; OPAS programming space for performance, classrooms, offices and support space; and other specifications that HDR provided at the meeting. 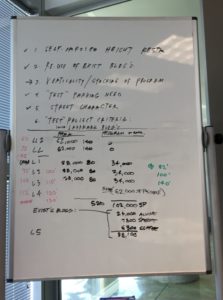 The design had to address a number of issues.

The Gang considered dozens of questions prior to the meeting, among them:

“Our goal going in was to advise and do a peer review,” Stott said. “We didn’t want to get into a ‘this versus that’ scenario. Frankly, it diminishes the act of design.” He noted the months HDR had worked on the project and the “huge number of man-hours” the staff had put into the project. “It was foolish to think that in a short period of time, with almost no background information, we could develop a comparable solution.

“We assumed HDR was going to present their solution, and we were going to review it,” he said. Stott said the HDR representatives never revealed their proposed design. “In their defense, HDR did not want to bias our effort. They wanted us to develop an independent solution. We didn’t want to do a solution.”

After introductions and a brief discussion, it became obvious the Gang of Five was not going to review HDR’s plans. “We rolled our sleeves up. We performed calculations based on the square footage required per single car,” Stott said.

“Egos were left at the door,” Jeffrey added. “We had a goal and through cooperation, we attained it.”  HDR representatives “facilitated and were supportive” and didn’t attempt to influence the direction or decisions of the Gang.

Stott agreed. “It was intended to be a collaborative effort, with no single firm leading the charge. It wasn’t Leo A Daly versus HDR or Alley Poyner Macchietto versus HDR.”

The Gang of Five represent design firms that provide historic preservation architectural work. “We have completed similar work in cultural and historic restoration,” Stott said. “We were not acting as individuals because we could provide staff and resources of our firms.”

Alley emphasized the Gang’s “meaningful experience designing new performing arts spaces” in addition to its shared success in historic preservation. “We are educated in the unique issues inherent to that building type, so the proposed alternatives we presented were cogent and rational,” Alley noted.

“Within 45 minutes, we had our first working scheme,” Stott recalled. Though the plan was short of the parking requirement, it was reasonably close. “It went so fast we were able to develop another scheme where we were a little more aggressive on parking,” he added. That scheme exceeded OPAS’ requirement by about 100 parking stalls.

“We completed a third scheme that gave OPAS the option of having additional commercial space on the street level, especially to the north, and condensed the parking into the interior of the building,” Stott explained. The parking entrance was between the Happy Hollow Coffee and Alvine buildings.

Stott said it was “surprisingly easy” to create schemes to meet the Holland’s space requirements. He noted HDR was responding to a client’s needs and requirements. “They had done a lot of legwork; they traveled and toured similar facilities. In my personal opinion, the restrictions given to HDR forced the solution in a specific direction.

Stott said the process worked well. He could see a design review process to assess other large-scale civic projects, such as the proposed developments at ConAgra, Crossroads and Aksarben Village. “It would be a great thing for the city to be able to use in the future.”

An early design scheme (yellow is parking, orange is retail and red is program space).

This design scheme met all the parking and program space requirements (original building in gray, existing buildings in white).