A Q&A with Our New Board President

In July, the Restoration Exchange Omaha Board of Directors elected Joe Saniuk as its 2016-2017 president. Saniuk is a principal architect with AO, where he has worked since 1998. He earned both a bachelor’s and a master’s degree in architecture from the University of Nebraska-Lincoln. 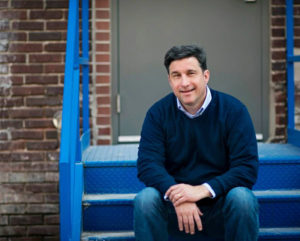 How and when did you get involved with REO?

I’ve been involved for several years. Right after the organization was created I started working on the advocacy committee with Brian Hansen and Larry Jacobsen. I was part of the group that went to the initial hearings on the Clarinda-Page. AO is an “in-kind” contributor for both Restore Omaha and the neighborhood tours and I have volunteered for both. Paul Nelson (REO’s first board president) asked me to serve on board and this will be my third year as a member.

Do you have any specific goals to accomplish as president?

I told Kristine (Gerber, executive director) that this is board version 2.0. The 2016-2017 board is the first with no founding members on it. The founding board had all the excitement to start something new. Version 2.0 says we’ve got to get different folks, and we have to have the same passion we had before. I’m really excited about the board. We did a really good job finding individuals with skill sets and background experiences that are going to broaden the organization.

My job is to make sure we keep everybody moving forward. We also need to look financially at how we grow. We have a great executive director. We have incredible value in her because the way she’s compensated isn’t close to what she brings to the organization. We have to find a way that we can get more revenue into the organization. Kristine and the board have also talked about how REO can grow in the future.

It’s amazing to me to see all the development projects inside the city. When you look at some of the vibrant neighborhoods of the past 10 years, like Benson, Blackstone, Dundee, that’s where people want to be. They want to be there for their lives, they want to be there for their work. That’s the part of REO that makes me want to be a part of this organization. There are developers who are contacting (REO) to talk to us about projects, and that says a lot about what REO has accomplished in the past and the strength of the staff and board leadership. That’s huge, and that shows how far we’ve come in a very short timeframe.

How do you gauge the public sentiment toward preservation? Is it viewed as a fringe thing or is it becoming more mainstream?

REO’s continuing job is to let people know how place matters. Preservation means different things. We’ve run into it with some of the elected officials and their perception of what preservation means. We’ve run into it with some other organizations and people on the street. The demolition review ordinance that just failed to pass is a perfect example of how we need to alter public perception of how our city is shaped.

REO’s job through the Advocacy Committee is to help people understand our public spaces. Vibrant communities have a mix of historic and contemporary structures. You can find that anywhere you want to go. We want quality spaces, whether they’re 100 years old or 100 hours old, it doesn’t matter. We want quality design for the people of Omaha. That’s going to help us become a vibrant community. That diversity in building is what younger people like; it’s what older people like. It crosses all themes.

Now that the demolition review ordinance has been voted down, what can REO and Omaha do to stem the tide of demolitions and save the significant architectural structures remaining?

I think we need to publicly thank Chris Jerram for his leadership on this. It takes progressive people to get out and have dialogue and discussions about it. REO is better to have tried and lost than to not have even pushed it. I really appreciate Councilman Jerram’s efforts to get this through. After the dust settles a little bit, I think REO needs to sit down with city leadership and figure out what our next step is. We’ve got a mayoral election coming up next year. If there’s a change in the city council as there always is, maybe there will be an opportunity for a change in attitudes.

How much of the work you do at the Architectural Offices deals with historic preservation?

We’ve always worked in the historic preservation realm going back to the beginning of the firm. The projects have varied from the developer-driven, adaptive re-use projects to a lot of work with the Joslyn Castle renovation. It’s a significant portion of what our firm does. We enjoy working with the solid buildings of the past—renewing their uses or finding new uses for them.

You’ve worked for the Architectural Offices since 1998. Do you have a favorite project or two?

They’re all my favorite projects. (laughs) I typically like to work on projects that have multiple moving parts. Wohlner’s was a good example. There are great businesses in there. Tom Simmons and Jenny Coco have a great restaurant. Wendy, Jason and David at Legend Comics, they’re wonderful people, they’ve got a great business model. That’s kind of a fun one. And I’m excited about the next projects we’re working on.

What inspired you to become an architect?

I grew up in a new suburb in Omaha, west of 72nd Street. Post-war housing is not known for its high style architecture. The school building that I attended was kind of a post-war building as well. When I went to work with my father—who was the superintendent at the Union Stockyards building for many years—it appealed to me on so many levels. You have to imagine what the Stockyards was like in the early 1970s. You’ve got this huge amount of livestock pens under a viaduct; there are trucks and trains, sheep and hogs and cattle everywhere. And then there’s this incredible, office tower in the middle of it. I remember the brick detailing, the flooring—it rivaled something in downtown Omaha. My father’s office had this rich paneling and frosted doors. To me it was like, “Wow, this is really pretty cool.” I could see the care and craft that somebody put into this building.

As a kid I always liked to draw. I still have some of the sketches and floor plans of buildings that I did when I was a kid. I could appreciate the built environment and how everybody interacts with the built environment. And then there’s the craft of putting things together. I realized when I was in junior high school what an architect is. I don’t want to knock the post-war housing too much, but I thought, “Whoa, this could be better.”

My wife, Denise, and I live in a house built in 1929. It’s a contributing property in the Country Club Historic District. It’s a swoopy bungalow with hardwood floors, a real masonry fireplace, a hearth with mosaic tile. It’s got all those things with a tactile quality that sometimes get lost today because it’s too expensive to do that anymore.

Architecture keeps changing as it has to respond to building science and building code. I think that’s really critical for what we need to do as architects.

Tell us about your family.

My wife, Denise, and I have been married for 22 years. Denise is an administrator for Omaha Public Schools at Norris Middle School. We’ve got twin children, Elise and Joe, who are going off to college.

What do you like to do when you’re not working?

Aside from Restoration Exchange Omaha, I’m involved with Omaha Solidarity, that’s a group that works to keep people from being homeless. I’m also on the board of directors of Catholic Cemeteries. We’re hoping to get our first property listed on the National Register within the year. We’ve been involved with St. Cecilia parish for a long time.

Denise and I go antiquing. We go to estate sales quite often. We walk our dogs in Metcalfe Park. We have a big Airedale and a Welsh Terrier. I go fishing from time to time. I cook a lot. I’m also working on a science fiction novel, although I haven’t gotten very far.