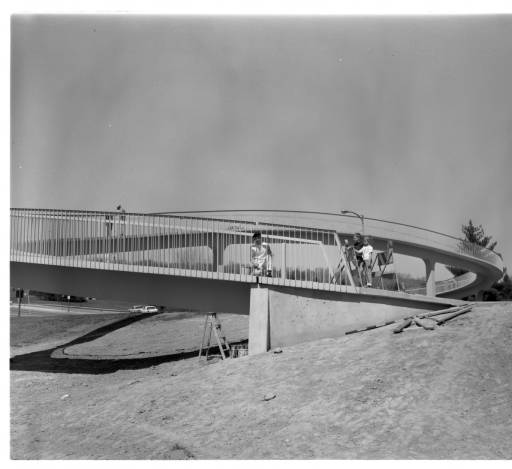 The bridge in 1968. From the John Savage Collection.

How do you cross Dodge Street?

You could risk life and limb by hitting the pavement to make a mad dash across Omaha’s main arterial.

Pedestrians in the Dundee and Memorial Park neighborhoods prefer the over or under approach. They have an underpass and an overpass to provide safe passage, and area residents are willing to invest in both structures to keep them around for future generations.

Residents are turning their attention to the overpass near 60th and Dodge streets after recently completing a renovation of an underpass at 51st Street. The green, spiral bridge that spans Dodge Street just south of the University of Nebraska at Omaha (UNO) is starting to show its age, as rust and flaking paint are becoming more apparent. Thousands of motorists drive under it daily, and hundreds of students from UNO and St. Margaret Mary—along with joggers, bicyclists and dog walkers—cross it daily.

The bridge has become an iconic place to post signs, rally for causes or protest societal ills. 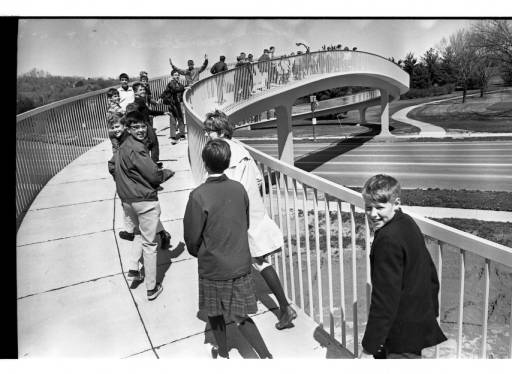 From the Robert Paskach Collection.

A fundraising effort to provide lead paint remediation, rust removal and a new paint job is in the works as the bridge nears its 50th birthday in 2018. The bridge passed a structural inspection last year. The Dundee-Memorial Park Neighborhood Association is a major backer, though Omahans from across the city seem to view the bridge as a beloved landmark.

William H. Durand, a one-time professor of engineering and aeronautics at Omaha University, designed the bridge. The Foster-Smetana Company built the bridge at a cost of about $66,000 in 1968. According to a 2003 article in the Omaha World-Herald, Durand, somewhat of a novice at bridge building, wanted an overpass that would suit the natural bookends of Memorial Park to the north and Elmwood Park to the south. Designed as a maintenance-free structure, the original bridge plan included heating elements to melt snow and a special steel that develops its own finish, thus eliminating the need for repainting. Those extras were scrapped to save money.

Even though it wasn’t built to Durand’s original specifications, the bridge still received accolades for its design. It was named “Most Beautiful Bridge’ (Special Type) by the American Institute of Steel Construction in 1969.

Backers have set their fundraising goal at $300,000 to make necessary repairs. City Councilman Pete Festersen has secured $75,000 in public works funds, and the city will contribute in-kind construction management services. Friends of the Bridge, the official fundraising group, hopes to raise the balance by the end of the summer. They have set up a page on the Omaha Gives! site to solicit contributions. Donation can also be made by going to the Friends of the Bridge web site.

Last year, Dundee residents – with the help of grants and donations – remediated the last remaining underpass in the city at 51st and Dodge. Dubbed the subway, the 1934-built underpass received new paint and LED lighting. UNO art students worked with Dundee Elementary school kids to create murals. Anti-graffiti coating was recently applied to protect the murals from vandalism.

After Dodge Street was widened in 1934, the city constructed the underpass to provide safe passage for school students and area residents. About 30 years later, city leaders began to consider how to cross Dodge Street about a mile to the west.