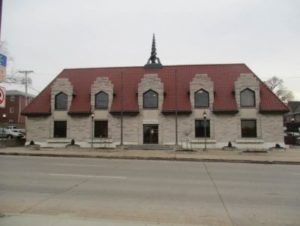 A local building that for 30 years served served as the National Headquarters of the Danish Brotherhood in America is on its way toward gaining landmark status in its first year of eligibility.

At its April meeting, the Landmarks Heritage Preservation Commission unanimously approved the National Register of Historic Places nomination of the building, designed by Edward J. Sessinghaus and constructed in 1966.

The building at 3717 Harney St. was nominated and approved based on its architectural significance. Stylistically eclectic, the building is an intact example of an early Postmodern/Late National Romantic office building with one-of-a-kind Danish architectural details. Those details—including a copper spiral cupola, integral stepped dormers, and terra cotta tile roof—were requested by the client, the Danish Brotherhood in America.

REO’s staff architectural historian Patrick Thompson, noted that, in many ways, Sessinghaus designed a typical small office building for the DBA headquarters: its horizontal orientation was similar to many of the ranch homes that were then being constructed in suburban Omaha. In other ways, he said, it is unique both to Omaha and to its time. Thompson notes that The Børsen, the 17th century stock exchange building in Copenhagen, Denmark, was the inspiration for at least some of the details of the DBA building.

The National Register nomination will go before the State Historic Preservation Board on May 13. If approved, the final step in the nomination process is approval by the National Park Service.

The building served as law offices from 1994 until 2015, when it was purchased by Security State Bank as future administrative space for Dundee Bank. AO is doing the architectural work on the property and hired Restoration Exchange to write the nomination.