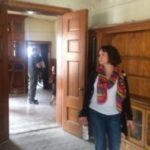 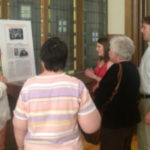 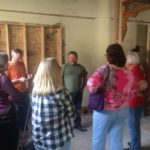 Nearly 130 people attended a tour of two buildings at 39th and Cuming Streets on April 17. Advertised as a members-only tour, nearly a third of those who viewed the buildings were not members or became members during the tour.

A boarded-up, three-story white house on the southeast corner of the intersection showed glimpses of its former glory when visitors stepped inside the 5,000-square-foot mansion. It wasn’t difficult to imagine the society events that once took place in the home, with its six ornate fireplaces and other decorative features.

Before it was converted into apartments in the mid-1940s, the 1890-built edifice was home to John and Fannie Griffith and their family. John was the general purchasing agent for the Union Pacific Railroad. Fannie was a charter member of both the Omaha Woman’s Club and the Omaha Society of Fine Arts. Active in the Daughters of the American Revolution, she entertained frequently and the Griffiths were regulars at society events.

Chris Janicek bought the building in 2014—saving it from likely demolition—and has begun the restoration process. Janicek was on hand during the tour to answer questions.

Tour-goers also had a chance to view the beautiful stained-glass windows and woodwork of the former Calvary Baptist Church across the street. Home to Harvest Community Church since 2004, the church was designed by Chicago architect W. C. Jones in the secession style and constructed by local contractor A. C. Busk in 1920. Pastoral Intern Tower Kountze was on hand to welcome visitors and give tours. Calvary Baptist Church, once the largest Baptist congregation in the city, sold the church building to Harvest for 10 percent of its value.