Heart bombing on Valentine’s Day had an immediate impact on one of the buildings that was showered with hearts and love.

On Sunday, February 14, about 30 people from Restoration Exchange Omaha “heart bombed” four vacant buildings. It was REO’s second year to bring about awareness of some of the city’s neglected but worthy older buildings by plastering colorful hearts on them.

REO received a call the next day from the New York-based owner of a building at 1501 Howard St. He heard his property had been heart bombed and wanted to know what it was all about. The conversation was a good one, and the owner said he was interested in restoring the building. REO asked an architect and a developer experienced in historic preservation to tour the building with the owner. REO shared information on Omaha’s downtown housing market and the availability of state and federal tax credits to help pay for the restoration costs. REO also provided some history and pictures of the building and will hear results of an initial assessment by the State Historic Preservation Office of the building’s eligibility for listing on the National Register of Historic Places by the end of March. If everything looks okay, REO will go to work writing the nomination this summer.

The three-story building on the southwest corner of 15th and Howard was home to the Western Newspaper Union and Western Paper Company from 1898 until about 1915. It was originally known as the Karbach factory block building and dates to 1892. A few months before his death in 1916, George A. Joslyn arranged to lease the building to an aspiring tent maker. Scott Tent and Awning Co., founded by Allen Scott, manufactured all types of canvas products in the building. During World War II, the firm produced hundreds of Army tents. The building was later home to Bobbitt Moulding and Frame Company and Copycat Instant Print Co. 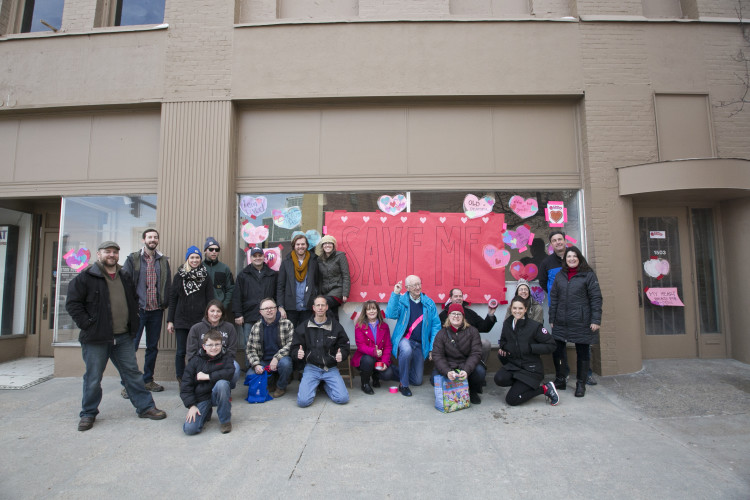 Other buildings heart bombed were:

The Logan Hotel, at 18th and Dodge Streets, once a prime spot for families relocating to Omaha. The hotel/apartment complex started in 1919 as the El Beudor Apartments. When Eugene Eppley purchased the building in 1927, he moved his hotel firm’s headquarters there and changed the name to the Logan Hotel. The twin building was designed by architect James Allan in 1917 and constructed during 1918 and 1919 by Home Builders, Inc., a contracting firm that moved its home office there.

Also on the receiving end of some well-crafted hearts was the Continental Baking Company Building. Architects Fisher and Lawrie designed the brick building at the northwest corner of 20th and Cuming for the Jay Burns Baking Co. in 1912. Built at a cost of $85,000, including equipment, the building featured 100 feet of plate glass along Cuming Street. The plant continued to produce bread, pies and cakes into the 1980s. Creighton University purchased the building several years ago. The once-gleaming plate windows were long ago bricked in.

And the one-story building housing Grampy’s Curious Goods in Benson, which served a good portion of its early life as the U.S. Post Office substation in Benson. The building’s capstone indicates E. H. Olson built the structure in 1911. From 1941 until Grampy’s moved there in 1997, the building housed a Cook’s Paint store, Benson Cleaners, Kay’s Store of Distinction, Stephenson’s School Supply Store and All State Paint and Equipment. Grampy’s Curious Goods sold antiques, lamps and odds and ends until 2015.

We are hopeful that the other building owners are considering restoration and new uses for the remaining buildings.

Check out the video with highlights from the day’s event.