Currently, if a property is not designated a local historic landmark, all the owner needs to knock it down is a demolition permit. Recent teardowns in the Dundee, Blackstone and Fairacres neighborhoods have happened days after a demolition permit was acquired. Many neighbors have been surprised and upset by the destruction. 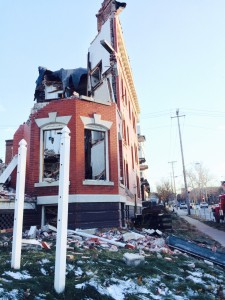 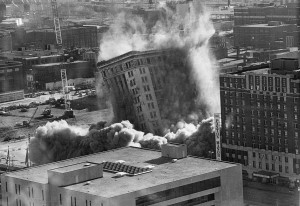 Demolitions of historic buildings, such as the Clarinda-Page, at left, and the Woodmen of the World, above, may be fewer with the passage of a proposed demolition review ordinance.

The proposed ordinance would require the city to review demolition permit applications for any building 75 years or older. If the city’s preservation planners determine the property has architectural and historic value, the city would hit a pause button on the demolition permit. The Landmarks Heritage Preservation Commission, neighborhood leaders and Restoration Exchange Omaha would be notified and given an opportunity to work with the current owner on alternatives. If no alternatives are found, LHPC could consider preparing a local landmark designation to help provide protection for the building. The City Council would have final approval on the local landmark designation. The whole process could take up to four months.

Restoration Exchange Omaha has worked behind the scenes providing Councilman Jerram with a National Trust preservation law publication on demolition reviews along with providing excellent examples of Demolition Review ordinances, forms and flow charts from cities across the country including Boulder, Boston, Denver, San Antonio and Des Moines.

At the Landmarks Commission meeting March 9, REO spoke in support of the ordinance but agreed with recommendations from the planning department to change the age of buildings considered from 75 years to 50. If a building must be demolished, REO recommended requiring a building survey and deconstruction so salvageable materials could be saved from the landfill and resold to a growing market of people wanting original house parts and old-growth wood.

Based on feedback from the Landmarks Commission meeting, the proposal will undergo further revisions before the City Council is asked to consider it.