The Art of Discovery

One of the best parts of working on historic buildings is the unexpected discovery. Many times projects are started with only a portion of historical character intact, possibly just the front façade, or a piece of stair railing or newel post. The hope of more detail — and more of the original building’s story — comes with every act of selective demolition. Luckily, it is usually far less expensive to bury something than it is to tear it out, so the hope of finding original details and ornamentation is always there. Recently I was asked to help renovate the Platte Valley Bank in North Bend, Nebraska. The mid-century modern bank is a gem sitting on Highway 30, and the owners wanted to renovate it for the bank’s anniversary. They also owned the adjacent 1918 bank building and wanted to turn it into a board room and community space, along with expansion for their bank. 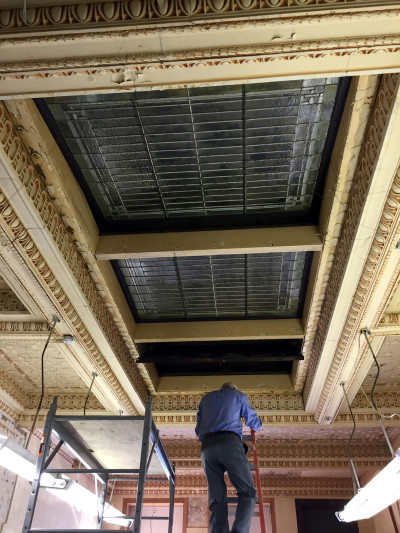 As I entered the older building I found an acoustical ceiling hung at 9 feet above the floor, and all the exposed wall surfaces covered with 12×12 fiber acoustical tiles. We poked our head above the ceiling tiles and were able to see ornamental plaster detailing on the ceiling – with all the flat areas covered in more acoustical tiles. We decided to remove the lowered lay-in ceiling and try to remove some of the 12×12 tiles on the wall and ceiling to see what the substrate was.

At my next visit the lower ceiling and some wall tiles had been removed showing all of the detailed plaster beams intact (needing various states of repair), and the original walls with a stencil ribbon around the room on both the walls and ceiling. The bank owner found a 1918 newspaper article of the original open house in the local library, and by comparing it with what we were seeing, it was now possible to start to see the original space. We could begin to identify what had changed during a major renovation in the late 1940s, and well as minor changes after that. The big question was the location of the skylights. There were referenced in the article, but were removed and covered over in the 1940s renovation. I told them the likely locations, and our hope was to add a lighting detail referencing the original openings.

The owners called excitedly two days later as they began to remove the ceiling in the center of the space and not only found the original opening in the ceiling for the skylights – but all three 4×5-foot leaded glass lenses still in place and, for the most part, intact. These were originally over the teller stations and were able to rotate 90 degrees for cooling in the summer. And while studying the glass closer, we also noticed the original wall color and even richer and more complicated stenciling on the walls under a piece of window trim that had been removed. Virtually every surface I had seen in the beginning had been changed from the original, but through careful demolition and study we are now in a position to know what that vast majority of the space looked like in 1918.

We continue to remove pieces slowly, hoping that we can keep peeling layers off until we have the original space once again intact. 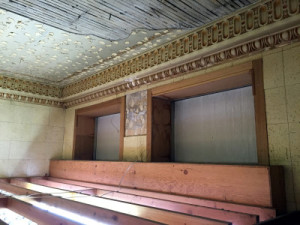 The bank’s original interior starts to reveal itself. 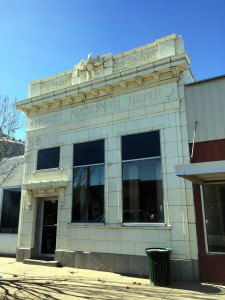 This building is part of a restoration project in North Bend, NE. 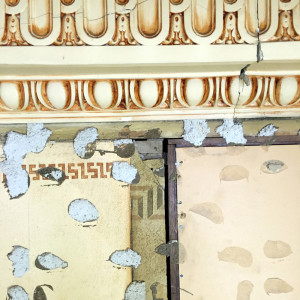