The Omaha City Council unanimously passed on Jan. 12 an amendment calling for land occupied by the Christian Specht building, the Happy Hollow Coffee building, and those of Alvine Engineering to be incorporated as a new project site into the Downtown Northeast Redevelopment Plan. The amendment included a redevelopment project that “entails the future construction of various expanded and new facilities” and would allow for the future expansion of the Holland Performing Arts Center, potentially including office space, educational classrooms, performance areas, retail space, parking and other uses. This followed the city Planning Board’s unanimous vote to approve the amendment at its Dec. 2 meeting.

The City Council will next consider the city’s proposed purchase of the buildings at 11th and Douglas. In November, after months of negotiations, the City finalized letters of intent with property owners in which nearly $11 million in redevelopment bonds would be used to purchase the buildings. The city council will first discuss the sale at its Feb. 2 meeting. Councilmembers will accept public comment at the second reading of the proposed action Feb. 9 and vote on the proposal Feb. 23. They also need to approve the city’s plan to hand over the properties to the Omaha Performing Arts Society (OPAS). 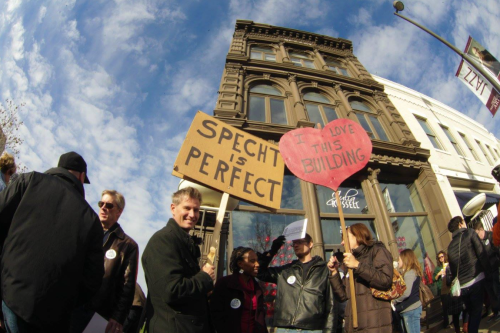 This chain of events was set in motion back in June, when HDR announced its intent to purchase a parking lot between 11th, 12th Capitol and Dodge—and primarily owned by OPAS—to build its new headquarters building. It wasn’t until late October that OPAS Chairman John Gottschalk started making claims toward the land east of the Holland, citing the arts center’s future expansion and the loss of parking from the sale of the lot across the street. The purchase of the buildings is contingent on OPAS selling its parking lot to HDR. According to a Nov. 25 press release from the Mayor’s office, upon closing the City will donate the properties to OPAS.

“This purchase agreement is the best solution. HDR can build its headquarters downtown. OPAS will own and constrol the property it wants for potential expansion. At some time in the future, if OPAS chooses to build on the property, it will a have to go through all of the required steps to remove the Landmark designation from the Specht building,” said Mayor Jean Stothert.

Restoration Exchange Omaha favors HDR’s headquarters building plans, and the organization does not oppose the Holland’s expansion. What it is concerned with is OPAS’ comments saying it only wants to preserve the “architectural features of the Specht Building” with no mention of wanting to incorporate the other two historic buildings in its plans. REO plans to show OPAS and council members the value of all of the existing buildings and how integrating them into an expanded Holland Performing Arts Center is the best solution.

REO has been arming itself with information on two fronts. In November, Restoration Exchange Omaha filed a Freedom of Information Act request to obtain information related to the sale of the properties at 11th and Douglas. Emails and other documents have recently been made available. The preservation group also has researched and discovered numerous examples of historic buildings being incorporated into new arts projects. 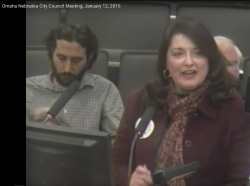 Kristine Gerber speaks in opposition to the amendment at the Jan. 12 City Council meeting.

When she spoke in opposition to the redevelopment plan at the Jan. 12 council meeting, REO Executive Director Kristine Gerber noted that the acquisition of the Specht, Alvine and Happy Hollow buildings by OPAS presents an opportunity. She called the pending acquisition “a chance to adaptively re-use unique and well-loved spaces in our city’s urban core.”

“Think about Omaha Performing Arts and what they want,” Gerber stated, listing restaurant, retail, educational and administrative space. “Now think how cool these spaces would be in these 100-year-old buildings at 11th and Douglas Streets. Think about the experience a guest artist would have staying in an apartment in the Happy Hollow building.”

Gerber cited examples of old and new juxtaposed in arts centers around the world, such as the Kansas City Ballet, the Weitz Center for Creativity at Carleton College in Northfield, MN and the Royal Conservatory in Toronto. Gerber concluded her remarks by saying, “Let’s work together to create a win-win situation for Omaha Performing Arts and this city and save these buildings.”

On Jan. 15, OPAS President Joan Squires invited five architects experienced in historic preservation to a collaborative session to discuss the expansion needs of the Holland. The meeting will likely take place within the next two weeks. Squire said the design will need to consider a new flexible performance space and spaces to host various learning and engagement experiences in dance, musical theater, jazz, and more that will include camps, workshops, master classes, community forums, and parking. “We are interested in your ideas and suggestions relative to the Specht building,” Squires stated. The Specht is both locally and nationally landmarked. Squires did not mention the other buildings by name or reference.

David Lempke, an architect from HDR, will facilitate and provide technical expertise during the meeting. “Our hope is that the group’s recommendations, advice and comments will be packaged in a report and given to the OPA Board for consideration by early February,” Squires said.

The developers of the buildings at 11th and Douglas 25 to 30 years ago were smart enough to know what they had. Beauty, grace, diversity and quality have enriched all who live and work in these structures. Ray Alvine saved his building from the wrecking ball in 1986, gutted it and then restored it. The two – story building, which runs from 1102 to 1108 Douglas St., now houses the engineering firm he started and turned over to his sons. A longtime board member of Landmarks Inc., Alvine was a vehement opponent of the original plan to raze the buildings in 2001.

Pedestrian orientation is crucial for vibrant, active public spaces. Historic buildings were designed and built with the pedestrian in mind. It is not by accident that human interaction and historic buildings go hand-in-hand.

REO has pulled all of the latest economic studies and will use the latest preservation tools to fight this. With initial plans showing OPAS building a 520-stall parking garage on the 11th and Douglas site, REO is also working with ModeShift, to share why more parking is not needed in downtown Omaha. 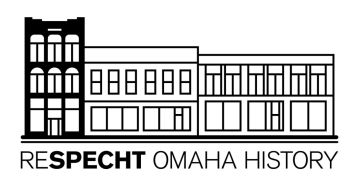 We will not go away.

How can you help?

Omaha residents write your City Councilmember. They are the final decision makers on this matter. You can email your councilmember by clicking here http://citycouncil.cityofomaha.org/council-members

And stay tuned by following our Facebook page, Restoration Exhange Omaha. We will report the latest on our efforts to save the 11th and Douglas buildings and how you can help.