At the Dec. 2 Omaha Planning Board meeting, the Omaha Performing Arts Society (OPAS) will present its preliminary plans for expansion of the Holland Performing Arts Center to the property now occupied by three historic buildings at 11th and Douglas Streets. The meeting will be held in the Legislative Chambers of the City-County Building, 18th and Farnam Streets, at 1:30 p.m.

The city has been abuzz with speculation since HDR announced its intention to build its new headquarters on a lot owned by OPAS at 11th and Dodge and the subsequent city purchase of the four properties east of the Holland. Mayor Jean Stothert offered $10 million in redevelopment bonds to the building owners and plans to present the buildings to OPAS, pending City Council approval. The sale of the buildings is contingent on the lot going to HDR.

The performing arts society initially stated that they needed the 11th and Douglas site for a parking garage, as they would lose about 200 parking spaces with the sale of their lot to HDR. They later submitted a design that included a new performing arts venue and a “mixed-use” facility. There was no room for the historic buildings in the plan. 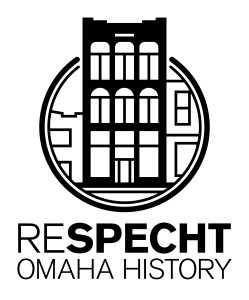 The Christian Specht Building is the oldest building of the four and the only one “protected” with city landmark status. It was added to the National Register of Historic Places in 1977 and named a city landmark in 1981. It is one of the few buildings in the state with a cast metal façade. The other buildings—all more than a century old—are the Happy Hollow Coffee building, and the Marshall Paper Co. and T.H. Smith Co. buildings, which were renovated in the 1980s by Alvine & Associates, a mechanical and electrical engineering firm that employs more than 100 professionals. 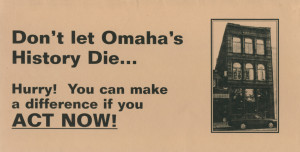 Cover of a Landmarks Inc. flier from 2001. The four-page document detailed many of the arguments that are being raised currently to save the buildings at 11th and Douglas Streets. Click on the image to see the flier in its entirety.

These same buildings and one other edifice were threatened in 2001, when the Performing Arts Society announced plans to build a performing arts center. The city and performing arts backers wanted to raze the entire two blocks from 11th to 13th Streets, Dodge to Douglas. The Swanson Foods plant occupied the spot where the Holland now resides; PAC backers wanted the properties to the east for “future expansion.” Landmarks Inc. and other preservation-minded Omahans took up the cause. Preservationists won that round—even though Frankie Pane’s bar, the next-door neighbor of the Specht building, suffered irreparable damage when it was battered by debris from the implosion of the Swanson building.

Now the Omaha Performing Arts Society has again set its sites on the four remaining buildings that share the block. After a public outcry about the potential demolition of four historic buildings—an outcry that sounded strikingly similar to the one 14 years earlier—Restoration Exchange Omaha was invited to the table to discuss ways of incorporating the buildings into the expanded Holland’s design.

Restoration Exchange Omaha and Mode Shift Omaha were co-sponsors of the “ReSpecht” rally on Sunday, November 22, in front of the historic buildings. More than 300 people waived signs and chanted slogans at the rally, which went on for more than the planned hour. Signs read, “Honk for History,” “I Love These Buildings,” “Keep Omaha Specht-tacular,” and other variations playing off the131-year-old Christian Specht building; others were more colorful, or off-color, as it were. 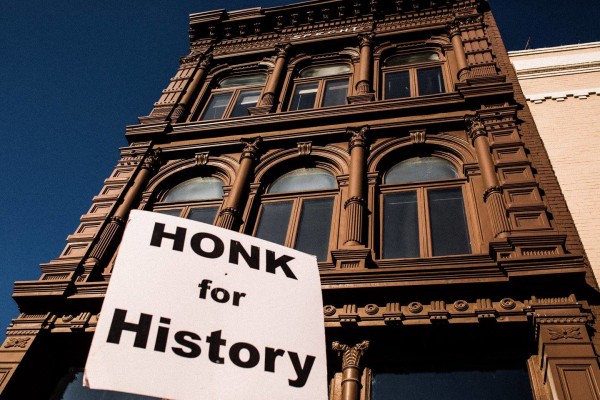 The soundtrack for the rally got the crowd pumped up, with songs like Aretha Franklin’s “Respect, Starship’s “We Built This City” and ELO’s “Don’t Bring Me Down” blasting from the sound system. Tom Petty’s “Won’t Back Down” didn’t make the list, but that was the message that REO Exeuctive Director Kristine Gerber articulated at the rally.

“We are not going to back down, and we are not going away,” she told supporters and reporters. “Whatever we need to do to try and save these buildings, we will do.”

Gerber said Omahans need to convince the OPAS board “how much Omaha loves these buildings” and how important they are to them. “We’re excited to be working with them in developing solutions for how these buildings can be incorporated,” she said. The buildings could be venues for a Holland center restaurant or office space. The apartments in the Happy Hollow Coffee Building could make a great “green room” for Holland performers. 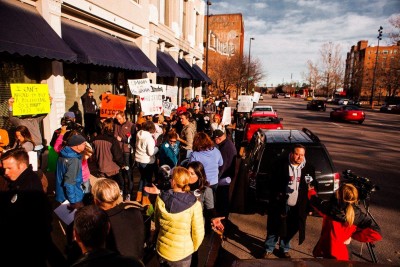 More than 300 people rallied on Nov. 22 to save the Christian Specht and three other buildings.

Mode Shift Omaha, which concerns itself primarily with transportation issues, opposes the demolition of the buildings and the construction of the mixed-use facility, which reportedly would include a 500-stall parking garage. “There is more than ample parking downtown,” they note, citing a city of Omaha parking study that tallied more than 40,000 parking spaces. Mode Shift chair Craig Moody also noted that the historic buildings add to the “walkability” of downtown Omaha. “These buildings are really important to the urban fabric of Omaha because they create a better, more walkable environment,” he said at the rally.

Mayor Stothert’s Facebook page has been the site of countless questions, insults and rebuttals about the whole affair, with many people questioning the $10 million purchase and gifting of the buildings. For its part, REO has remained civil in tone.

Gerber praised Stothert for comments she made at the Nov. 18 ribbon-cutting ceremony at 7 Burlington Station. “There is often public discourse when the future threatens our past, when development threatens history,” the mayor said. “There is a place for both development and preservation in our city. We must work together to find common ground and solutions that accomplish many goals.”

KETV’s transformation of the former Burlington station was a solid win for preservationists and the city, thanks to creative design work by Leo A Daly, the construction expertise of Lund-Ross and sub-contractors, and the vision of KETV station management. Saving the buildings at 11th and Douglas will require perhaps more. In addition to world-class design solutions, it will require diplomacy and a rejection of the status quo.

REO members are encouraged to remain active in the fight to save these buildings. Letters, post cards and emails can still be sent to the mayor’s office, city council representatives and the OPAS board. Members are encouraged to sign the online petition and attend the Planning Board meeting on Dec. 2, at which REO will present the petition. Donations to REO will help keep the public abreast of the latest developments, rallies and public meetings.