Neighbors Want to Save Yates

Activists in the Gifford Park neighborhood are working feverishly to save the Henry W. Yates School building and the refugee programs it currently houses.

The fight to save the John McDonald-designed school building has perhaps eclipsed the neighborhood’s long-held desire for a local school, which it has been without for 16 years. With the passage of a $421 million bond issue in 2014, the Omaha Public Schools earmarked about $17 million for the construction of a new building for the Gifford Park neighborhood. Though neighbors are pleased with the funding for a local school, they are unhappy with the potential loss of the Yates building.

There has been talk of demolishing the Yates building and six houses surrounding it to make way for a new school to serve Gifford Park students. Though OPS has acquired one of the homes, at 307 N. 33rd St., district spokesperson Todd Andrews said the district remains open to all possibilities for the new Yates school. “The district does not have a finalized plan for the school,” Andrews told Restoration Exchange Omaha. 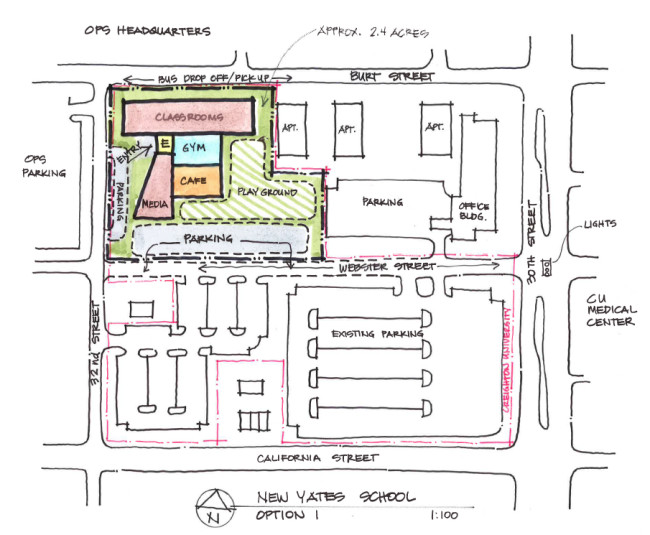 Members of the Gifford Park Neighborhood Association have been campaigning to direct OPS toward an alternate site for the new school. Their choice: a parking lot on 32nd Street between Burt and Webster Streets and adjacent to the OPS Teacher Administration Center. The lot is owned by Creighton University and has been used for hospital parking. Creighton is in the process of selling its hospital building and the adjacent parking lots. Creighton has stated that it hopes to sell the property in one transaction and not parcel it off.

Longtime resident Chris Foster, who is active on the Gifford Park Neighborhood Association, said Restoration Exchange members can support the cause by taking any or all of the following actions:

-Fill out and sign the Gifford Park School Effort form letter of support.

-Join the Gifford Park email list to receive updates to upcoming events related to the effort.

Any of the first three actions can be accomplished by contacting Chris at foster3413@cox.net, or by mail at Chris Foster, 3413 California St, Omaha, NE 68131.

You can also help by:

Neighborhood association leaders felt energized when more than 200 people attended a meeting on November 10 at the Yates Community Center. OPS board members Marques Snow— a neighborhood resident— and Marian Fey attended. Since then they have redoubled their efforts to distribute “SAVE YATES” yard signs and continue to solicit letters of support.

“We plan to deliver next week a package of copies of roughly 700 letters of support to the both the Creighton President and to the Creighton Board of Trustees,” Foster said. The group will continue to encourage “serious dialogue” between OPS and Creighton to “come up with a solution to build our new neighborhood elementary school on a Creighton-owned vacant parking lot land near 32nd and Webster and keep Yates Community Center building and programs intact.”

Gifford Park supporters have spoken at the last several OPS board meetings to state their case. They have cited historic preservation, safety, costs, and other factors as they try to convince the OPS board to keep the original building for its current refugee programs and community center role and build a new school for area children.

The school’s namesake, Henry W. Yates built a stone, castle-like edifice that he called Hillside in 1888. The president of the Nebraska State Bank, Yates served for nearly 50 years as a senior warden at Trinity Episcopal Church and a was an original incorporator of the Omaha Library Association. Following his death in 1915, Yates’s widow, Eliza, sold the western half of the property to the Omaha school district for $1. It was to be used to build a school honoring her late husband.

Yates School served neighborhood students until 1999, when OPS converted it to a center for students with behavior disorders. In late 2008 it became a sort of community service center for early childhood education and a parent resource room. Computer, ESL and sewing classes are taught. It has also become a meeting site and community center.

In addressing the OPS board at its Nov. 16 meeting, REO Executive Director Kristine Gerber called Yates “a place that matters” in the Gifford Park neighborhood. She joined neighborhood residents who spoke at the meeting who want to keep Yates in its current role and create a new school that serves “this vibrant neighborhood.” The 32nd and Webster site “offers room for expansion, ease of access for buses and vehicle traffic, and safety for our teachers and students,” she said.

“Creighton has taken far too much from this neighborhood, tearing down houses for promised student housing that never came,” Gerber said. “This an excellent time for them to give back and sell this property to Omaha Public Schools.”

Emma Erickson, who lives across the street from the Yates building, made an impassioned plea to save the building for its architectural heritage and the legacy of the Yates family. “The Yates family was invaluable to the development of early Omaha,” she said at the OPS board meeting. “Their legacy must be honored and protected by keeping the Yates School for future generations to understand the contributions of this prominent and impactful Omaha family.” She said the neighborhood views the building as “an indispensible landmark in our close-knit community.”