This year marks the 100th anniversary of Saint Barnabas Church, the home of a parish in the Anglo-Catholic tradition. Though founded in 1869, the parish had several urban locations prior to acquiring land available after the 1913 Easter Tornado.  Churchwarden and art dealer Milton Darling, was a close family friend of Sarah and George Joslyn and they may have facilitated the Saint Barnabas’ acquisition of the property to the south of their home. Its architect, Charles M. Nye, was as member of the Anglican Church and a participant in the charitable activities of the Brotherhood of Saint Andrew. It is thought that Mrs. Joslyn paid Mr. Nye’s fees.

With its powerfully canted white walls feeding into a series of geometric sloping buttresses, Saint Barnabas is a striking structure. Passersby might recognize the influence of the Tudor Revival style so popular in 1920s American domestic architecture. The church has all the hallmarks: a steeply pitched roof, two cross gables (gables that intersect and complicate a rectangular structure), ornamental half-timbers, bargeboards (flat boards facing the front of the eaves), stucco, and diamond-paned leaded windows. It’s a readily familiar type; around the Dundee and Country Club neighborhoods one sees numerous Tudor Revival homes, apartment buildings, and commercial property such as the half-timbered office building on 49th and Dodge. 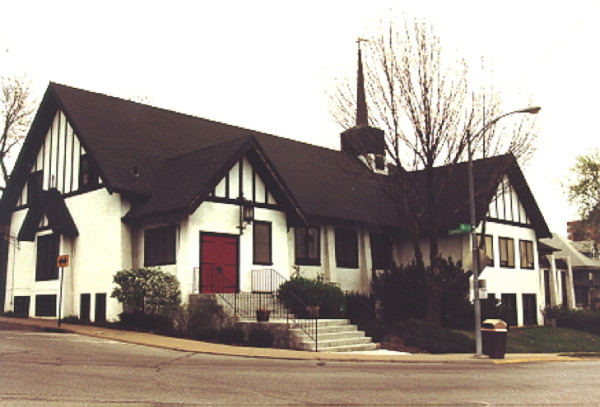 To understand how a domestic style was reinterpreted as religious architecture, Nye’s work needs to be understood in light of English Vernacular Revival style and its proponents. Vernacular Revival style was a late 19th century interpretation of the medieval past based on ordinary structures created for the common people. Rather than appropriating elements from monumental castles or cathedrals, Vernacular Revival borrowed from cottages, inns, and small village churches reflecting the local skills, materials, and techniques of a particular area. Father Lloyd Burdwin Holsapple, the rector at the time Saint Barnabas was designed influenced its style. Holsapple was originally from Hereford, an English county bordering southern Wales and sharing many of its building traditions. The region has harshly acidic soil and—at least since the sixth century—lime was imported and mixed in the fields to neutralize the acidity. Mixed with fat and water, it forms an emulsion that was used to whitewash and supposedly disinfect buildings inside and out, making houses and churches startlingly white. The walls themselves were made of drystone beneath the limed plaster and were often stabilized with a slope. Many of the early churches, such as that of Llandeilo Tal-y-bont (now located at Saint Fagan’s history museum), share these visual features with Saint Barnabas.

Concurrently, in its precise linearity, Saint Barnabas appears quite modern, reflecting the ubiquitous influence of one of England’s preeminent Arts and Crafts architects, Charles Voysey (1857–1941). Voysey was renowned for interpretations of medieval half-timbered buildings in stucco with sloping buttress-like terminations to the gable ends. His walls and gables were so strongly geometric they bordered on abstraction, and he is considered a forerunner of modernism.

The interior of Saint Barnabas follows the pattern of medieval parish churches. Entering through the traditional red doors emblematic of the Passion, sanctuary, and holy ground we stand to the back of the nave where the octagonal stone font is located beneath the organ loft. The chancel was extended in 1920, but the nave is still a simple long aisle with monumental beams now partially hidden by the dropped ceiling. Originally the altar was an unadorned wooden structure with gothic tracery painted white (in the manner of many Midwestern farm churches), but a white and gilt pinnacle baldachin was added later. A recent addition of pastel French painted borders punctuated with fleur-de-lis disturbs the simplicity of an interior once ornamented only by rich ecclesiastical furnishings. The Great Rood (rood is an old Anglo-Saxon term for a large crucifix) or Rood Beam, a crucifixion with Mary and Saint John on the crossbeam high before the chancel, mirrors those typically found in churches before the 13th century. The elegant Rood group, the standing Saint Barnabas, and the pulpit with its carvings of the four evangelists, are all attributed to Alois Lang (1872-1954), a master ecclesiastical carver of some note who immigrated from Oberammergau. The windows of the Life of Christ to either side of the nave and in the chapel dedicated to Our Lady of Walsingham are the largest set by C. E Kempe and Co. in America. The studio founded by Charles Kempe and later run by his nephew Francis Tower was one of the preiminent English designers of ecclesiastical stained glass (note the firm’s badge of a wheat sheaf surmounted by a tower in the corners of some windows). Their sumptuous colors—delicately visaged saints, peacock-winged angels in pearl-encrusted vestments, and landscapes recalling Albrecht Dürer—must have appeared to even greater splendor in a starkly white interior. The once-simple walls are further punctuated by Renaissance Revival reliefs executed by the Cantagalli workshop. One of Florence’s oldest potteries, Cantagalli was known for superb interpretations of the white tin-glazed terracotta reliefs of the Renaissance Della Robbia family found in public collections in Italy and abroad. There are two demi-lune overdoor panels, “Alpha and Omega” and “The Annunciation,” a small panel of the nativity, and a magnificent Virgin and Child surrounded with fruit garlands. 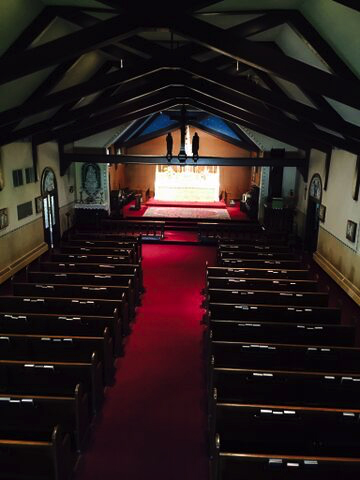 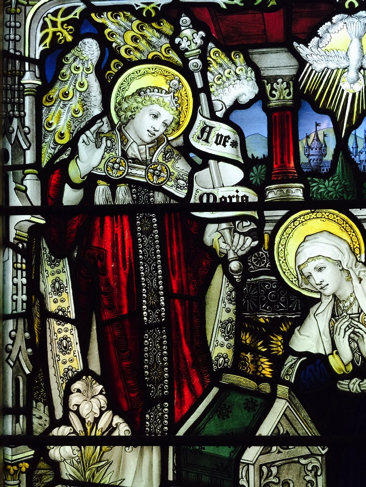 While an interest in English Arts and Crafts style certainly influenced Nye’s plans, equal weight must be given to the mission of the church itself. Saint Barnabas’ rectors have a long history of social activism, and the church was designed to be emblematic of a ministry to the common man. Realized in the humble vernacular, it contrasts beautifully with the two “Castles”—Joslyn and the original Offutt House—that surround it, both versions of Gothic Revival, a style meant to evoke the aristocratic landowners of the past.

Celebrate the churches 100th anniversary by attending a service. High Mass, celebrated with music and ceremonial is offered Sundays at 10:15 a.m. Low Mass is Sundays at 8:45 a.m. and throughout the week.

On November 1, All Saint’s Day, St. Barnabas celebrates not only 100 years in their building at 129 N. 40th Street, but also welcomes the Rt. Rev. Msgr. Jeffrey Steenson, Ordinary of the Personal Ordinariate of the Chair of St. Peter for a Pontifical Mass, followed by a reception with light savory fare and appropriate celebratory refreshments.