Many Omaha pioneers are laid to rest at the cemetery, whose first burial dates to 1858. Attendees can pay their respects and learn of those interred at Omaha’s oldest cemetery during the tour. Attendees will receive a 36-page tour booklet highlighting the Omaha pioneers buried in the cemetery, a tour of the chapel, and an opportunity to walk the grounds of a Nebraska historical site and a Nebraska Statewide Arboretum site. Prospect Hill board members Barb Naughtin, Larry Jacobsen, Larry McNichols, and Darlene Menard will be on hand to answer questions and give guided tours, if requested. Jacobsen is the former REO president, and Naughtin is an active REO volunteer.

Omaha’s first white citizens, William and Rachel Snowden, are among those buried at the 17-acre site, one of the highest points in Omaha. Byron Reed, an early Omaha developer, has a substantial monument to his memory at the cemetery. Reed owned the land on which Prospect Hill rests and supervised the cemetery for 25 years.

The elite of Omaha, along with many common citizens are buried at the cemetery. Nearly 15,000 burials have been recorded. The cemetery boasts several Omaha mayors, including Andrew Poppleton, Clinton Briggs, brothers Ezra and Joseph Millard (Joseph was also a U.S. senator), Smith Caldwell and Frank Moores. 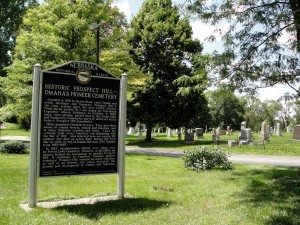 A state historical marker near the entrance to Prospect Hill Cemetery 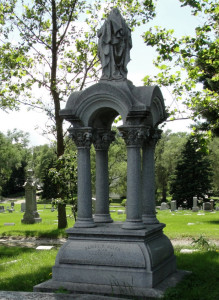 Anna Wilson paid for this elaborate monument to Dan Allen. She is buried beside him.

Omaha’s most famous madam, Anna Wilson, and her companion, riverboat gambler Dan Allen, have side-by side plots at Prospect Hill. Other famous Omahans buried here include beer moguls Frederick Krug and Frederick Metz, real estate developers Andrew Hanscom and James Megeath (in the cemetery’s only mausoleum), banker Henry Yates (who owned a castle-like home at 32nd and Davenport), attorney James Woolworth, and Omaha’s first schoolteacher Adelaide Goodwill Root. Buffalo soldiers are interred here, as well as soldiers from Fort Omaha. Even a few veterans of the War of 1812 have Prospect Hill as their final resting place.

Those attending will also have a chance to view Restoration Exchange Omaha’s work uncovering the history of the surrounding Prospect Village neighborhood.

The main streets that define the boundaries of the Prospect Village or Highlander neighborhood are 30th, 35th, Hamilton and Lake streets. The terms “prospect” and “highland” were defining features of the 300-acre neighborhood. The neighborhood was blessed with a beautiful view, a large stock of low- and moderate-income homes and close proximity to the downtown core. Thirty-third Street between Hamilton and Parker Streets commanded the majority of commercial activity in the neighborhood. Between 1940 and 1970, numerous small businesses intermixed with residential properties. In 1950, those businesses included seven grocery stores, four barbershops and a pharmacy, shoe repair, watch repair, florist and other shops. There was a streetcar track along 33rd Street, which aided the area’s development. Learn about the neighborhood’s decline and its prospects for renewal during the tour.

Parking is available inside the gate, to the west of the caretaker’s house. A number of pamphlets and books produced by Prospect Hill board members and volunteers will be available for a donation in the cemetery chapel. 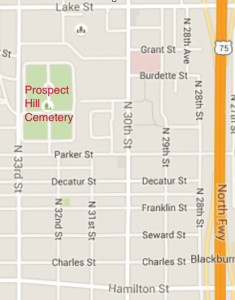