Varied architecture and home decor greeted tour-goers, as did spectacular weather on a beautiful autumn afternoon. “Mid-century modern, federal style, 4 x 4 and more!” wrote one visitor, noting with surprise the variety of architectural styles among the homes. Some were surprised by the range of ages of the structures. One home was built in 1891, while several homes, as well as St. Adalbert church, went up in the 1950s. 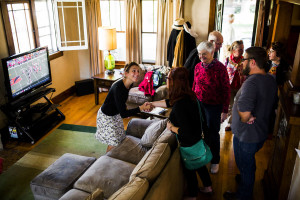 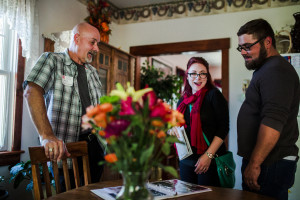 Prior to the tour, a number of survey respondents indicated little knowledge of the neighborhood or viewed it as “a neighborhood in decline.” Post-tour comments were universally positive. “Every home was unique and spectacular,” wrote one respondent. “The homeowners were particularly proud of their homes and the neighborhood.” “I appreciated the beauty and creativity of the homeowners and those who did renovations,” said another. “I like the feeling of community in the area,” said one survey. Another lauded the individuality of the home styles: “Love it! No cookie-cutter homes here.”

Regarding the tour itself, attendees were enthused about the tour and complimentary booklet. “It was great that in most of the homes the owners were present and available to ask questions, which provided additional information about the home,” said a tour-goer. “This was our first and we loved it,” said another visitor. “We will do it again.”

“I was pleasantly surprised there were that many people,” said Dave Larson, whose raised ranch at 2101 S. 38th St. was one of the tour stops. “I had a good time greeting people and talking to them about my home. I got quite a few compliments about the house.” People especially liked the family room, Larson noted. “It’s a nice comfortable room with an enjoyable view.”

Some remarked at how the house looks larger inside than it does from the outside. Others liked how it flowed nicely. “It’s unusual to find a house from the ‘50s with that [open] layout,” Larson said.

Larson decided to add his home to the tour list when his across-the-street neighbors, Ruben and Taylor Gomez, told him about it. “I was very enthused about the whole thing,” he said. “I was impressed with the organization and look forward to what’s next.”

Homes selection has begun for the 2016 REO Fall Home Tour, which will showcase the Aksarben neighborhood.