Doug and Melissa Hegarty weren’t really in the market for a new home when Melissa arranged a walk-through of a home on a wooded lot in Loveland in 2012. That walk-through lasted more than two hours and by the time they walked out the door, the Hegartys were sold on the style, quality and craftsmanship of the home.

Three years after purchasing it, they obtained the home’s plans and architectural drawings from Restoration Exchange Omaha. The Hegartys discovered that the craftsmanship that went into their home was no accident. In pages of renderings, drawings, plans and specifications, the construction and materials were spelled out in meticulous detail.

“The plans really blew us away,” said Doug Hegarty, a senior manager at PayPal. “The level of detail, even the notes and the penmanship… They’re pretty incredible works of art. We’re going to do some framing and preservation.”

The man behind those plans was Norman R. Brigham, who designed the colonial-style home at Ridgewood Avenue and Pacific Street for accountant Lake Deuel in 1931.

REO purchased the Brigham drawings of the Deuel home and many others properties prior to an estate sale in 2014. Mark Volenec-Hamel, one of the proprietors of Out of the Closet Estate Sales, discovered the drawings while sorting through the possessions of Eleanor Brigham Cotton. The architect’s daughter had boxes of her father’s plans in her garage, next door to her father’s house at 54th and Western. 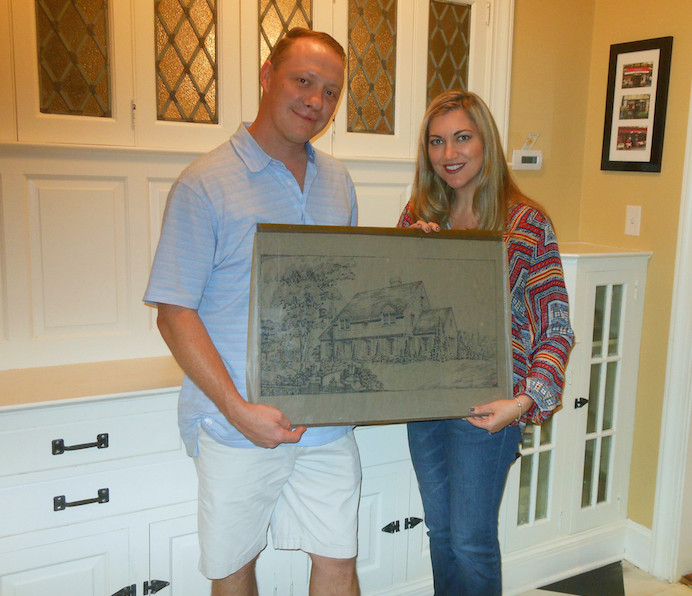 Doug and Melissa Hegarty with a sketch of their home by architect Norman Brigham.

Included in the collection were plans to Brigham-designed homes, schools, churches and commercial buildings in Omaha and surrounding communities. Each set of drawings contains 20 to 50 sheets of site plans, floor plans, elevations, sketches and notes. When Volenec-Hamel connected with Kristine Gerber, executive director of REO, she eagerly snapped them up. Gerber set about cataloging and digitizing the plans. The Hegartys are the first customers.

Prior to obtaining the plans, the Hegartys had learned some home history through an abstract of the property. Original owner Lake Deuel only got to enjoy the home for about seven years. He died suddenly at age 45 in 1938. His widow, Eloise, lived there for about 10 more years. Two other families lived in the home briefly. Merrill and Louise Eaton, both psychiatrists, moved into the home in 1960. The Hegartys purchased the home from the Eaton estate; they acquired the abstract, which spells out all the property transfers.

The Brigham drawings explained some questions the Hegartys had about the property. For Melissa, who had long been fascinated by the house, the plans revealed why there were doors on both sides of the garage. The plans show a circular drive that coursed through the property— through the front of the garage and out the back, connecting to the carport. While the drawings answered some questions, they raised others. Site plans reveal a lagoon on the property. Was it built and later filled in? Or was the lagoon a detail that was never constructed?

“This was a house I would drive by all the time,” said Melissa. “I wondered what it looked like inside. I just thought it was the coolest house.”

Melissa Hegarty is not a strict preservationist, though she does consider herself a steward of the home. She has replaced some light fixtures, but is keeping the old ones in storage.

Future plans may connect the house and garage and reposition the front door. “I wouldn’t want to do anything that was not in complete character with the way the house was built,” she said. “It would all be traditional and I would want it to look like it was always there,” said, Melissa, who has a background in interior design.

The co-owner of two Nothing Bundt Cakes franchises, Melissa wants to retain the classic styling of the house.

The parents of two young daughters, the Hegartys are active in Christ the King church and several nonprofits. They’ve made many cosmetic changes to their home, and now with plans in hand, will continue to update the home to their taste.

Norman Brigham, a Michigan native who came to Omaha in 1913 to assist architect Thomas Kimball in the design of the Fontenelle Hotel, was a charter member and three-time president of the Nebraska chapter of the American Institute of Architects. He designed nearly 40 homes in the Dundee area, and the clubhouse of the Dundee Golf Course. Brigham was a graduate of the University of Michigan and the Columbia School of Architecture. He was one of 50 architects invited to submit a design for a solar home in a 1948 book entitled “Your Solar House.”