It went from gas to gastronomic. Now the building at 38th and Farnam Streets, with the twin castle-like spires, will be dispensing bread, dough, lettuce and other greens, both legal and tender.

The 1930-built structure—long the venue of McFoster’s Natural Kind Café—recently got a new lease on life and in 2016 will become home to a branch of Dundee Bank. The Architectural Offices is preparing the plans to transform the building into its new role. Dundee Bank purchased the McFoster building, three condemned buildings to the west and the adjacent Danish Brotherhood building across Harney Street as it plans to expand into the burgeoning Blackstone Business District.

Restoration Exchange Omaha is helping the clients research the history of the building to complete Part 1 of the tax credit form. They will work to get both federal and state historic tax credits to help finance the restoration. Patrick Thompson has completed the history on the property for REO.

Originally the White Rose service station, the building was a contributing property as part of the Gold Coast District nomination for the National Register of Historic Places in 1997. The nomination states that the building exhibits Tudor elements such as turrets, half-timbering and a red clay tile roof. 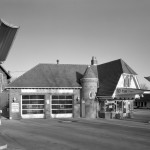 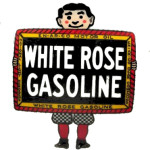 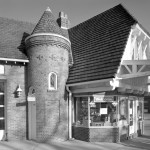 Keith Herrman of the Architectural Offices, the lead architect on the project, said plans are to bring back the original façade of the building to its days as a gas station. The structure will mimic the garage doors that were in place on both sides of the main office. One of the original exterior light fixtures remains, and three others will be fabricated to match to help recreate the look.

Herrman said a tile wall that had been dry-walled over will be brought back. The original quarry tile floors will be featured in the lobby. The bank will include a modern canopy drive-up window separate from the main building. Dicon Construction is currently cleaning up the building interior.

The three condemned building to the west will be demoed next month to make room for parking and the drive-up window. Nicole Malone of the Architectural Offices noted that Dundee Bank has hired Johnson Deconstruction to deconstruct the homes and to recycle any usable materials.

The property was subdivided and changed hands numerous times between 1860 and 1880. Thompson noted that the property became the subject of real estate speculation during that time and especially in the early 20th century, likely due to the designation of Farnam Street between 15th and 40th Streets as a section of the Lincoln Highway, a 3,300-mile long national highway between New York City and San Francisco.

By the turn of the century, four small houses had been constructed along the west side of South 38th Street, probably as a speculative venture. In 1929, the National Refining Company paid $40,000 for the four plats to build a new prototype service station. The original intent was to move the four homes, but they were instead demolished. A 1931 National Petroleum News article about the station indicates that there was “some opposition to the station when it became known business was to invade a residential neighborhood but, when drawings were shown nearby residents, they withdrew their objections because the beauty of the building and its landscaped yard has really added to the appearance of the community. Thus the station has been a factor in building goodwill.”

The article also noted that “the station is a showplace, not only for National, but also for the manufacturers of the equipment used in it.”

The National Refining Co. station operated as a White Rose service station from 1930 until the Skelly Oil Co. purchased it in 1944. It operated as a Skelly station until 1984. After a lengthy renovation, the building opened as Villa Dino’s Italian Café in 1986. The restaurant, which offered al fresco dining, was operated by Don “Dino” Norlin until early 1994. Tom Foster and Mary McGranaghan opened McFoster’s Natural Kind Café about a month later, offering a mostly vegetarian menu and featuring organic ingredients. Kelly and Chris Johnson took over the restaurant in July 2012 after the original owners faced debt issues. The Johnson tried to make the venture profitable but were forced to close in November, 2014.

Dundee Bank’s main office is at 5015 Underwood in the former Buffett Grocery store. The new branch is expected to open in the summer or fall of 2016.