The building, a brown brick one-story, sits under the shade of mature street trees on a quiet corner in Omaha’s Little Italy. Surrounded by small single-family homes, the somewhat rambling structure looks like a first cousin to one of the city’s old-school Italian steakhouses. Step across the threshold, though, and there’s no steak, shrimp or mostaccioli in sight.

It may very well be one of the most creative live/work spaces in the country, thoughtfully crafted by Eric and Amber Goodenough, owners/operators of Commonwealth Studios. Founded in 2013, Commonwealth provides local musicians and engineers with a well-documented, world-class recording facility experience at nonprofit rates.

The husband-and-wife team, married since 2000, is a study in opposites. Eric is an eighth-generation Santa Barbaran, and Amber has lived all over the world. He prefers Europe, she California. He’s as reserved as she is animated.

What unites the Goodenoughs, though, is a powerful entrepreneurial spirit and a need to connect with the community that surrounds them. Their first major renovation project was inspired by a chance experience in Maui while on their honeymoon. “We went to this rad coffee shop and just thought we could do it better,” Amber recalled. “There’s absolutely no fear when you’re young and inexperienced – I was 21 and Eric was 23.”

The byproduct of this inspiration was the opening of Caffeine Dreams on Farnam Street in 2001, which set the tone for today’s coffeehouse culture in Omaha. Anyone who’s sipped a cup while lounging on a comfy sofa in this midtown staple gets an immediate sense of the couple’s design aesthetic – relaxed artisan chic with a healthy nod to local history, culture and tradition.

“We like good design, and I think we’ve been influenced by our travels,” Eric said. Self-described digital nomads, Eric’s day job as a programmer/web designer allows the couple the freedom to work from any place he can plug into. After selling the coffee shop in 2005, they bounced around Europe and the California coast, soaking up the strong sense of place in each locale and letting it steep before pouring it into their next big project – the studio. 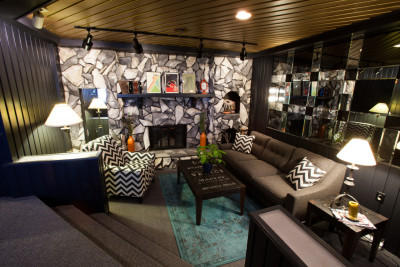 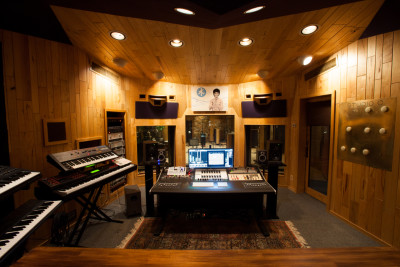 How does one describe a 100-year-old structure with a colorful, yet somewhat undocumented history? Rumored mafia headquarters (settle down – we said rumored, people). Allegedly set on fire – not once, but twice. A supposed 3,800 square feet of tunnels and a possible bullet hole. And then there’s the one about an oh-so-famous lead singer who is said to have locked himself in the hot tub room for two days with nothing more than a bag containing a large amount of a powdery white substance as his companion.

Yes, the Goodenoughs confirm, there once was a hot tub room, which looked like something that belonged in the basement of Tony Soprano’s New Jersey digs (but that is absolutely the only thing they can confirm). It’s long gone, but the studio – designed by Tom Hidley, the “father of acoustic design” at Westlake Audio – is there in all its 1970s glory. As the story goes, the original owners hired Hidley to build them a room just like the one in which Michael Jackson’s “Thriller” was recorded.

The couple purchased the building in 2013 after Eric made the decision to return to his musical roots. He and Amber’s brother, Dustin Frank, worked as interns at Santa Barbara Sound under Grammy awarding winning producer Dom Camardella. Today, Dustin and the couple are the Commonwealth nucleus and offer clients an affordable space to work on tracks and develop their ideas in a vintage atmosphere that truly needs to be experienced to be appreciated.

Once the door to the outside world closes behind you, the first thing you notice is the quiet – it’s like you’ve just been buried in a time capsule far beneath the earth’s surface and left for future generations to discover. Then you’re hypnotized by the 1970s vibe that somehow pulses from the building’s walls and finishes and maze-like layout. When you enter the control room and settle into the black leather seat designated for the producer, you’ll get a sudden hankering for a smoke and a heavy crystal glass filled with Dewar’s over ice. Visions of a skinny, shaggy-haired Stevie Nicks flying in to lay down a track start to fog your reality.

Initially, the couple intended to permanently rent out the building’s living space to musicians who booked studio time. They scrapped the idea rather quickly after falling in love with the structure’s eccentricities and surrounding neighborhood.

Last December, the Goodenoughs began transforming the space outside of the studio operation into their home. “It’s still a work in progress,” Amber said. “We’re trying to retain as many of the building’s unique characteristics as we can while making it a modern living space that we’re comfortable spending time in.”

They recently completed an extensive kitchen remodel that exudes a relaxed farm-to-table feel and transformed a former garage into the master bedroom. The project list is still evolving, as is the direction of the studio itself. “We’re open to working with musicians from all genres, as long as their music is true,” Eric said.

And as long as they don’t demand a hot tub as part of the package.

Eric and Amber Goodenough are searching for information about the early history of their century-old building in Omaha’s Little Italy. They’ve been told it once served the neighborhood as a grocery store. Can you help? Got any photos from its heyday? They’d love to hear from you ateric@commonwealthomaha.com.

Written by Teresa Gleason, REO Invigoration volunteer. If you have an idea of a home or building to feature, e-mail us at info@restorationexchange.org.