Architects, developers, and owners and lovers of historic buildings and homes joined together to applaud the region’s built environment at Saving Places, A Preservation Celebration May 14.

Like a fine work of architecture, it was all in the details. The setting at the century-old Scottish Rite Cathedral…images of historic Omaha buildings displayed on four screens in the main hall…preservation-oriented auction packages…preservation awards culled from the ruins of Jobbers Canyon…large sugar cookies with the Saving Places logo as parting gifts.

“This was an energized gala!” said Larry Jacobsen, president of Restoration Exchange Omaha. “There was an upbeat buzz throughout the evening, from the patron tour, the gala venue, socialization and a tremendous, inspiring awards program. In a setting where polite applause might have been the norm, the audience was visually and vocally boisterous of their recognition of those who founded and fostered Landmark’s Inc. to the current recognition of REO award recipients. It was an event to savor and value.” 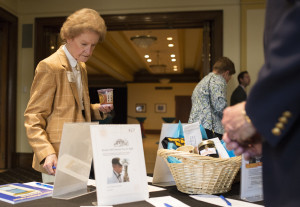 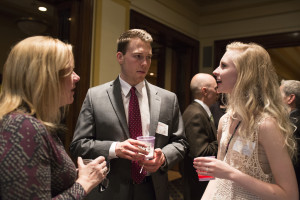 The evening started with a patron party at the historic Omaha Building, with drinks and hors d’oeuvres. Guided tours of the building gave patrons an exclusive view of the structure, home to event host Kutak Rock. At the main event at the Scottish Rite, guests enjoyed inventive fare by caterer John Ford, cocktails, wine and other drinks, and a silent auction with more than 40 packages.

Guests gathered in the auditorium for a short program and awards ceremony. Jacobsen presented a brief history of Landmarks Inc., the preservation organization that formed in 1965 in an effort to save the post office building at 16th and Dodge Streets. Founding member Fritz Cassman was honored and received a standing ovation. Past Landmarks presidents—including Bob Perrin and George Hacker—and board members were also recognized. Former city perseveration administrator Lynn Meyer received rousing applause.

Short videos highlighted the work of each award recipient and included their remarks about their role in preservation. Each honoree received a terra cotta remnant from one of the 24 Jobber’s Canyon buildings torn down in 1989 to make way for ConAgra’s campus. They were given as a reminder to the award winners and all of those in attendance of the importance of their work in saving Omaha’s historic properties.

The Kimball Prize, named for Omaha architect Thomas Rogers Kimball, was presented to Todd and Mary Heistand of NuStyle Development Corporation. The award recognizes distinguished achievement in preservation, rehabilitation and renovation of properties in the Omaha area. Since 1988 NuStyle has renovated and converted 74 buildings into housing and commercial space; of those, 39 were listed on the National Register of Historic Places.

The AIA Omaha Preservation Award was presented to Alley Poyner Macchietto Architecture for the Hughes Irons Motor Company in Council Bluffs. The project impressed jurors with its reuse of historic elements associated with the building’s former use as a garage. The jurors particularly noted how architects took “grease and oil-stained floors and made them a focal point, even leaving the pockmarked walls in the commercial spaces.” The Architectural Offices won an Award of Merit in the category for its work on the Security State Bank building in Ansley, Nebraska. The rehabilitation and addition gave new life to the building and added value for the entire community.

The Architectural Offices won the top prize in the Building Preservation category for its transformation of the historic Buffett and Sons Grocery Store, now occupied by Dundee Bank. Jurors noted the architects’ diligent work to bring back the original appearance of the front façade and to restore neglected interior elements. The Buffett project has been hailed as an impetus to restoration of other buildings in the Dundee business district.

The Residential Preservation Award, recognizing excellence in preservation, rehabilitation, or renovation of a single-family home, went to Martin, Rob, and John Janousek for their restoration work on a house at 3201 California St. “Too often houses fall into a state of vacancy, entering the seemingly never-ending revolving door of foreclosure until demolition occurs,” read the jurors statement regarding the Janousek transformation. “The rehabilitation was well thought out, taking every opportunity to fix deficiencies and restore or rehabilitate the original materials in the home.”

An Award of Merit went to Michael and Lisa Chudomelka for the work on their home at 1039 S 30th Ave. “The Chudomelka’s did the research to understand their home’s history and over the last 12 years have painstakingly rehabilitated the home in the Ford Birth Site area.” Also receiving an Award of Merit for residential preservation were Beth Richards and Sharon Olson, owners of the Minne Lusa House at 2737 Mary St. Jurors said of the community house: “The folks behind the Minne Lusa House have taken a liability for the neighborhood and, against all odds, created a resource and an asset.”

The Young Preservationist Award was bestowed upon Matt Baker, a leader of the movement to revitalize the Minne Lusa neighborhood. Baker helmed the effort to list his neighborhood as a historic district on the National Register of Historic Places.

Bill Stott, a former Landmarks board member and current member of REO’s Invigoration Committee, called the gala a top-notch affair. “I have been passionate about preservation since Jobbers Canyon in the late 1980s, but it finally feels like Omaha preservation efforts are reaching their potential. This gala, I believe, marks a new chapter in Omaha’s preservation efforts.”

Jacobsen agreed. “REO now has a platform of much greater breadth and scope, addressing not only historically significant structures, but also engaging the community,” he said. REO has gone from small restoration techniques to “active involvement with neighborhood associations, municipal, county and state engagements, and most importantly, fostering a strong sense of community pride and activation in the preservation and continuation of Omaha’s historic environment,” Jacobsen said.

To see 2-minute videos highlighting each of the award winners check out REO’s YouTube page. 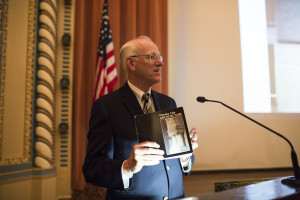 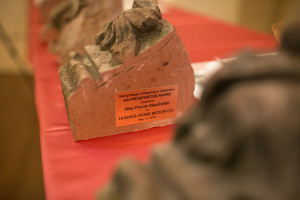 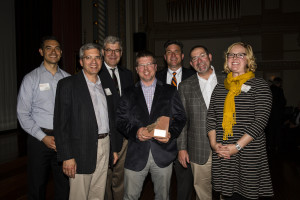 The staff of the Architectural Offices took the top prize in the building category. 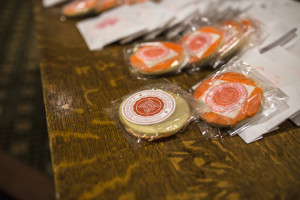