It was my first visit to Little Italy on Sunday, February 28. My visit to the beloved historic neighborhood was to attend the auction for the former Metcalf Mansion (a.k.a. Johnston & Son Mortuary) down on S. 10th and Pierce. The new owner says it’s a derelict and a hazard. As the new owner of an old house myself, I thought I’d go see how my money pit compared to his. It’s something of a beloved pastime for old home lovers. 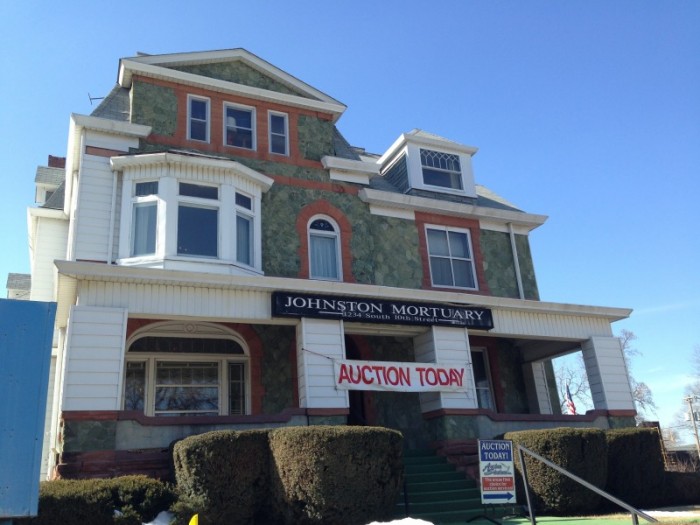 I’m new to Omaha, moving here a couple months ago from Montana, to take a job as a museum curator. After attending the wonderful Restore Omaha conference on Feb. 27, I heard the sadness and disappointment of area preservationists over this building. Don’t get the wrong idea that a preservation conference is a downer—it isn’t. But I’ve heard the old arguments before, and having lived in and among old buildings, I know saving them is sometimes simply not an option. I had to see the old mansion-turned-funeral home myself.

“And that’s going to California,” the auctioneer boasted, “where it can be used again,” as though it couldn’t be used here. Make no mistake, this grand old building is coming down. Some seem to think it could still be saved by some stroke of bureaucracy, or philanthropy, but it isn’t going to happen. And long before it comes down, its beautiful intact history will be gutted. I love architectural salvage and know it plays an important part in preservation activities, but this one is different.

Sometimes in old buildings, there just isn’t much history left. Buildings are living, evolving things, and even if they are old, you must still use your imagination to see what its story was. The Metcalf was a rare exception. The Metcalf Mansion was beautiful. Not a crack in the plaster, not a single stuck door. Yes, there was some unfortunate carpeting, and some bits had been modernized; it wasn’t a time capsule. But, all the original woodwork was so unlike the trim in my historic house. In my house, there are several layers of old paint dripped, swiped, and blobbed onto just about every surface. Not here. It was original, old and pristine.

The Metcalf Mansion has mistakenly been referred to as the Kountze Mansion. A fascinating article out the day before the breaker’s auction now links it to an early Omaha builder named John Coots, most of whose buildings now seem to be gone. It was perhaps the first electrified home in Omaha, a wedding gift to Anna Cornish Metcalf, early women’s rights advocate and art collector. I want to know more about these stories, and I know being able to tell those stories into the future would strengthen our understanding of our beloved city. Too bad the best witness to those lives is being obliterated. On purpose.

“It’s a crime they’re tearing this one down,” a man on the third floor said to me. I nodded. Popping into one of the final bedrooms, the number of which I lost count of, I was stunned to see an enormous ceramic fireplace. The purples and blues were vivid, almost shocking against brown and green. It stood out in stark contrast to the early 1980s silvery blue cut pile carpet. The old mansion was like that too. Vivid and stark. Its memory will be too. Another gleaming “what if” on the roster of irreplaceable history our community has lost over the years. History is a finite, nonrenewable resource, whether we utilize it for enjoyment, education, community building, identity forming, and yes, future commercial gain. 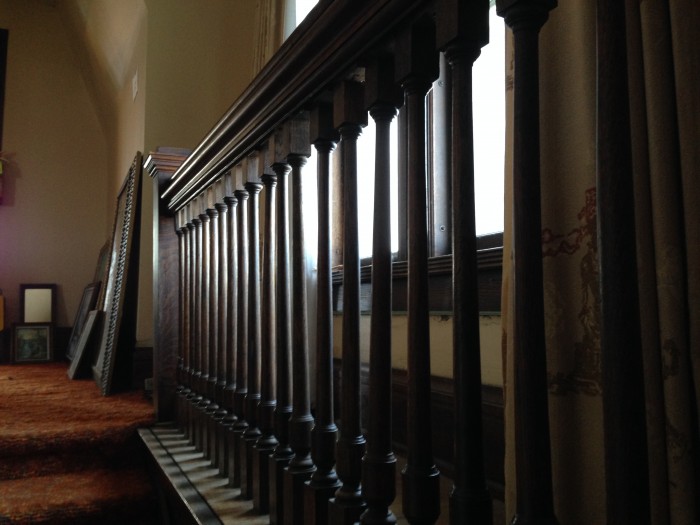 Anticipating a crowd, the auctioneers set up closed-circuit TVs so bidders could raise hands from various rooms. It was standing room only. Bidders swarmed in. I poked around upstairs, took a few photos. Not a single door stuck. I wish my historic house was like that. In mine, a couple doors stick, a few don’t quite latch right. Every bit of the Metcalf Mansion appears intact.

Even the memories are intact. As I came through, an Omaha World-Herald article proudly hangs, titled “This home’s got a bit of life in it yet.” It certainly did.