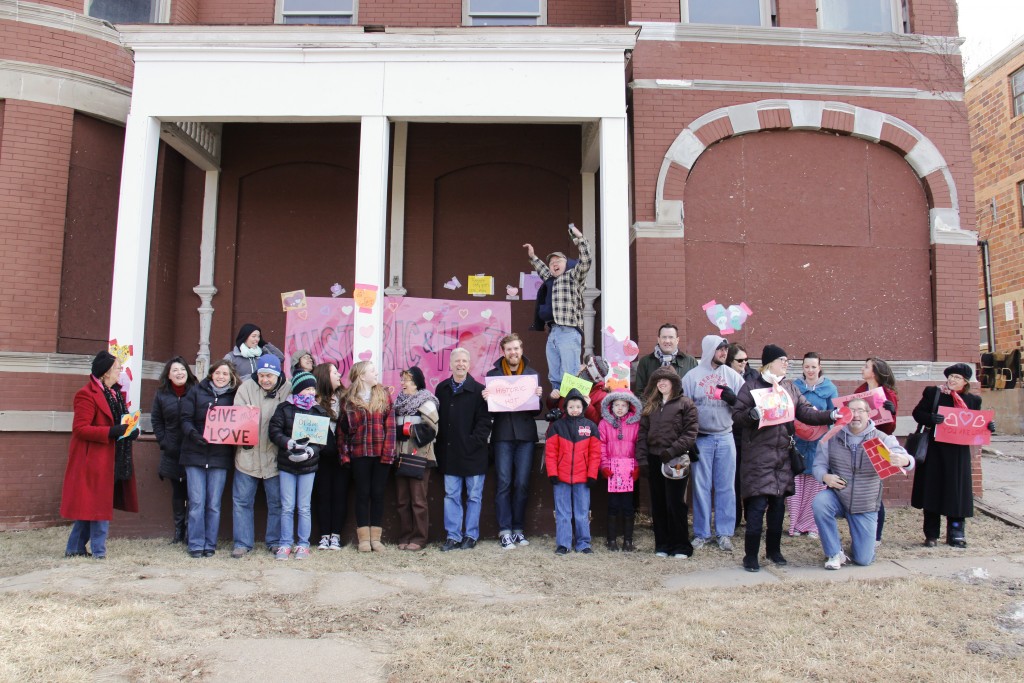 About 50 volunteers adorned six vacant buildings east of 30th Street with paper hearts on Valentine’s Day. It was a way to show the mostly forgotten buildings a little love and to boost their visibility. Heart bombing debuted in Omaha to warm reviews, despite the frigid temperatures.

“The event drew young and old, seasoned and new volunteers,” said Invigoration committee and event chair Adam Andrews. “Everyone had a blast traveling from place to place and exploring some of forgotten Omaha.”

After feeling the sting of the bitter wind at the first heart-bombing site— the Corby Theater on North 16th Street—volunteers figured out ways to limit their time in the elements. They stockpiled strips of duct tape to minimize numb fingers. They tended to stay in their cars until most if not all of the volunteers had arrived at the next site. After awhile, adrenalin and the thrill of heart bombing kept them warm.

“It was really cold, but it was still very fun,” said seventh-grader Callie Bockart, a student at St. Cecilia Grade School. She took part in the heart bombing with classmate Caroline Schmeits.

The Corby Theater was designed by James T. Allan and constructed for the Epstein Brothers in 1926. The 700-seat theater used Italian travertine marble in its entrance and lobby walls. It remained a theater until the late 1950s. After a dormant period, it reopened as a nightclub in 1992. A disastrous fire in 1999 has left it quiet.

The second heart-bombing site at 611 N. 16th St. started out as a saloon and once housed the Nebraska Furniture Co. The building has a Queen Anne-style bay window and Romanesque-style window arches on the north face. It was headquarters for Volunteers of America for about 15 years and has housed a number of variety stores, most recently Koory’s Variety store.

The only residential building of the six was once known as the Ormond Flats. It was constructed in 1896 and has many intact original features, including exterior spindle-work, a mansard roof, a cornice above the second story, ornate terra cotta detailing and a two-story bay window. It is rumored that Lady Gaga noticed the building while in Omaha for a video shoot. While she is a not-so-secret admirer, it is not known if she is a potential buyer.

The intersection of 24th and B Streets is the location of a building with the name “O’Rourke” chiseled across its west exterior. Though J. F. O’Rourke ran an early car dealership there, the 1918 building is primarily known for the grocery store that Fred Hahn and his wife ran there for about 30 years. It has been vacant for several years.

Certainly the most imposing of the sites is St. Patrick’s Catholic Church at 14th and Castelar Streets. The Gothic Revival style church was built in 1910. Fr. Edward Flanagan served as an assistant pastor there before moving on to found Boys Town. Due to declining numbers, the parish recently merged with St. Frances Cabrini; the last Mass was celebrated there in June.

The final site on the heart-bombing tour was a two-story brick structure at 14th and William Street in Omaha’s old Little Bohemia district. The first floor was a saloon until prohibition took hold. Starting in 1921, tailor Michael Kalcik operated his shop downstairs and lived upstairs with his family. He remained there until his death at age 81 in 1966. The retail shop served as a photographer’s studio and an antique shop in the 1980s.

Heart bombers received a welcome reception at the Cornish Mansion at 10th and William. Owner Arnie Breslow welcomed the cold but happy volunteers and gave tours of his building.

Executive Director Kristine Gerber said Restoration Exchange Omaha plans to reach out to building owners. “We want to help connect them with buyers, developers, or craftsmen to keep these historic buildings around for future generations of Omahans,” she said.

Check out a two-minute heart bombing  video on the event created by Brent Lubbert.